THE first European settler in St Kilda arrived around 1839, the year that Melbourne saw its first attempt at holding High Holy Day services.

It is not known exactly when the first Jews settled in the area. Moritz Michaelis arranged private minyanim for the High Holy Days during the 1860s. On Sunday, September 12, 1869 he presided over “a few Jewish residents” who came together to consider “the advisability of establishing a Hebrew school and Synagogue in St Kilda”.

It was exactly 28 years since on September 12, 1841, Asher Hyman Hart had convened the meeting that resolved to establish a Jewish Congregational Society; that was the genesis of Melbourne’s first congregation, the Melbourne Hebrew Congregation.

Now inter alia two members of the Hart family were involved in the St Kilda meeting – as well as Isaac and Michaelis Hallenstein – the latter, like Moritz Michaelis himself, presaging at its outset the intergenerational congregational involvement of these key St Kilda families.

And then there was Isaac Jacobs at whose Acland Street residence the meeting took place, who would become a key activist in seeking reforms in the form of service that the Colonial synagogues used following the British model.

Over the ensuing two years High Holy Day services were held in the Wesleyan church hall. But finally, on September 3, 1871, at the home of Israel Bloomington, a meeting considered the best means of obtaining “a permanent place of worship for the Jewish residents of St Kilda and the neighbourhood”.

At that meeting 150 years ago it was resolved that, “The Jewish residents of St Kilda and the neighbourhood form themselves into a congregation called the St Kilda Hebrew Congregation.”

Moritz Michaelis was elected the first president. That year High Holy Day services were held at St Kilda Town Hall; about 100 persons attended making it obvious that there was scope for a congregation.

Just a month later, on October 15, a further meeting agreed to purchase land in Charnwood Grove; by February a general meeting agreed to proceed with building. Plans were approved in June, and on July 1, 1872 Michaelis, assisted by I. Bloomington, laid the foundation stone for the synagogue. A large gathering attended the consecration ceremony held on September 29.

The building was extended in the 1880s and twin domed towers were added to the facade. In 1904, structural alterations and extensions were made under the supervision of Nahum Barnet.

The other major issue confronting those pioneers was the appointment of a minister.

Isaac Hallenstein, then overseas, was asked to assist in the search. And on September 14, 1873, the annual general meeting approved the appointment of Reverend Elias Blaubaum of Hanover, Germany, as a reader and teacher. He was inducted on December 28. Chief Rabbi Nathan Marcus Adler appointed Blaubaum to the Beth Din (so obviously was satisfied with his credentials) and offered assistance to the congregation as needed. Throughout over three decades as minister, Blaubaum maintained Orthodox practice despite pressures for alterations to services sought by Isaac Jacobs and others. Nevertheless it was during his tenure that a choir with lady choristers was formed. (In 1905, they would join the male choir). Instrumental in establishing the Montefiore Homes, he founded and edited the Jewish Herald. He passed away in April 1904.

Some months later, Frederick D Michaelis, the eldest son of Moritz Michaelis, would meet a young Jacob Danglowitz in London and the die for succession was cast. With his name anglicised to Danglow he arrived in Australia in September 1905 and was immediately inducted as minister, commencing some 52 years of loyal service. In 1909 he married May Baruch, granddaughter of Moritz Michaelis.

With nearly four decades of history behind it and a new minister in place, the congregation had indeed cemented its place in the Melbourne Jewish community. But then came the Great War, which saw many of the finest young men of the congregation volunteering for service, including sons of the established founding families. A tradition developed that when men were sent to the Front they would be called to the Torah to be farewelled prior to departure. By the time it was over, 113 men from the congregation had enlisted and sadly 19 died.

Danglow served as a locally based chaplain; after Pesach of 1918, he too would head overseas to serve as the Jewish chaplain for the Australian Imperial Forces on the Western Front. Initially entitled “Reverend” as per custom at the time, he would be accorded the title “Rabbi” in June 1934 on his 25th wedding anniversary. 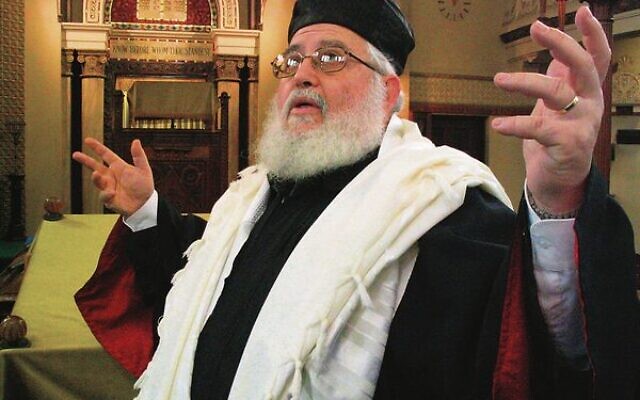 The original synagogue building was both dated and small; by the time of the congregational Golden Jubilee in 1921, it was clear that a new synagogue was essential. It took until mid-1925 for acquisition of the property just opposite the original synagogue, on which the current synagogue is located. Plans were prepared by architect J Plottel based on a synagogue in Chicago. The subject of an upstairs ladies gallery versus facilitation of a space for women downstairs (as had been the case of the old synagogue) was hotly debated. The compromise achieved and implemented was construction of the upstairs gallery – together with provision for those women who so wished to be seated in a designated area downstairs as is still the case to this day. Henry Eilenberg’s construction tender was accepted.

On February 28, 1926, F. D. Michaelis, who followed in his father’s footsteps as president, laid the foundation stone using the same trowel his father had used in 1872. The last service at the old synagogue was held on March 13, 1927; the following day, saw consecration of the new, significantly larger synagogue, described as an “imposing structure of Byzantine design”.

A tradition developed that when men were sent to the Front they would be called to the Torah to be farewelled prior to departure.

A bequest by the late Mr Samuel Myers in 1940 facilitated the building of a hall adjoining the synagogue, which has served the congregation and wider community as a function hall. To accomodate growing numbers, the ladies’ gallery was extended in 1958. On November 20, 1984 the refurbished centre in the Samuel Myers Hall was named in honour of Adele Southwick. Further renovated in 1999 to provide more accessible facilities, it serves as the venue of the congregation’s large overflow service on the High Holy Days.

In May 1970, the Danglow Centre was opened to house the administration as well as a youth centre. Renovated Danglow Centre offices were opened in 1998 and the synagogue was listed on the Historic Buildings Register on January 1, 2001.

RABBI Danglow served as senior Jewish chaplain to the Australian Army in World War II, visiting New Guinea and the Pacific Islands. Staunchly loyal to the Crown he had serious concerns over developments in Palestine but later came to terms with establishment of the State. On July 1, 1957 he retired; he died in 1962, aged 82.

For a brief period from September 1959, Rabbi Dr Simon Herman served as chief minister. However a new era began when on March 27, 1963, Rabbi Ronald Lubofsky was inducted. Historian (and a former colleague) Rabbi Raymond Apple describes his incumbency at the synagogue as a golden period. Rabbi Lubofsky was a powerful figure, tall, handsome and eloquent, whose orations brought the synagogue pulpit to great heights. He was an accomplished scholar and lecturer in many fields, with a remarkable Judaica library. 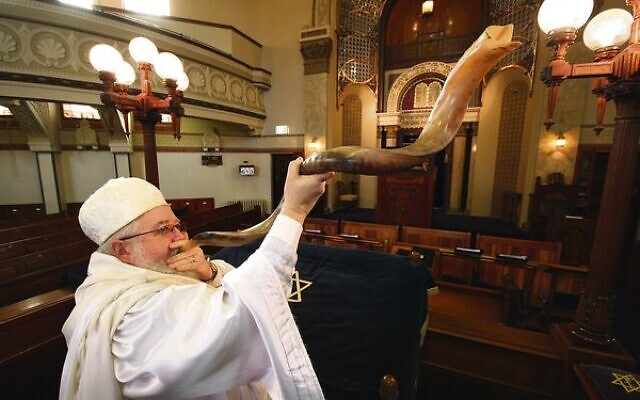 Before coming to Melbourne he had been a minister in London and then assistant minister at the Great Synagogue, Sydney. While at St Kilda, he introduced changes in the pronunciation of Hebrew and reintroduced the all-male choir. He played a significant role in interfaith dialogue and held leadership positions in areas as varied as the Melbourne Jewish Male Voice Choir and Mount Scopus Memorial College. He served as president of the rabbinate of Australia and New Zealand and was the founder and mentor of the Jewish Museum of Australia.

Rabbi Philip Heilbrunn was inducted as chief minister in May 1988. Born and educated in South Africa, he and his family emigrated to Australia in 1979, initially serving in Sydney and then Adelaide. Blessed with a beautiful tenor voice, Rabbi Heilbrunn brought magnificent musical skills to St Kilda, rendering the synagogue liturgy with unsurpassed cantorial talent. Together with Rabbi Lubofsky, Rabbi Heilbrunn co-founded the Melbourne Jewish Male Voice Choir and like Rabbi Lubofsky, he too served as president of the Australasian rabbinate.

He was succeeded in 2011 by Rabbi Yaakov Glasman who had previously served the North Eastern Jewish Centre. Rabbi Glasman too served as president of the Rabbinical Council of Victoria and was subsequently elected president of the Rabbinical Council of Australia and New Zealand. Keenly interested in interfaith dialogue, he is an active voice on many issues including against domestic violence.

Successive senior ministers aside, an impressive series of eminently qualified other personalities have placed their stamp on the religious life of the congregation.

Following a brief period of service by Revd Joseph Friedlander, Joel Fredman was appointed in 1886 as teacher and reader. Until 1943, he devoted his life to the congregation, in roles as varied as secretary, choirmaster and Hebrew school headmaster.

Like Fredman, Abraham Feuerman also carried out whatever congregational responsibility was necessary for 21 years until his death in 1915. His daughter Hettie was famously trained by him to teach generations of bar mitzvah boys.

From 1915 to 1933, shochet Revd Joel Falk served a second reader. Similarly, Rabbi Isaac Jacob Super, Melbourne’s head shochet from 1913 and member of the Beth Din, assisted the synagogue in various ways, including giving learned rabbinic expositions on Shabbat afternoons. Appointed in 1929 as headmaster and second reader, Rabbi Lazarus Morris Goldman assisted with congregational activities at St Kilda before moving to the Melbourne Hebrew Congregation in 1932.

Revd Ephraim Kowadlo was chazan, assistant minister and headmaster from 1931 to 1970. In Rabbi Danglow’s absence, he also occupied the pulpit. Though not an official minister, Emanuel Sheink (brother-

in-law of Rabbi Israel Brodie) tunefully read the Torah and assisted with services for a number of years. Assistant reader for some years from 1943, Revd Phillip Berliner whose full-time work was with the Shechitah Board, was a highly effective teacher. He married Edna, the daughter of Rabbi Super.

From 1949 to 1953, Revd Berthold Wreschner was principal of the Hebrew school and assistant minister to Rabbi Danglow. He subsequently founded and headed Melbourne’s Moriah College and eventually moved to Israel.

Rabbi Steven Link served as chazan from 1970 to 1984 fulfilling a broad ministerial role as well as carrying out educational work. From 1982, Rabbi Edward Belfer served for six years, initially as part-time chazan and then as full-time minister while Rabbi Lubofsky was incapacitated owing to a severe road accident.

Harry Gluck was assistant minister from 1989 to 1996, while his full-time work was in education. David Havin served as reader from 1994 to 2008. He is a barrister. Appointed in 1996 to assist Rabbi Heilbrunn, Rabbi Hillel Nagel conducts services and understudies the chief minister in the pulpit and general ministerial work. He too works in the legal field. 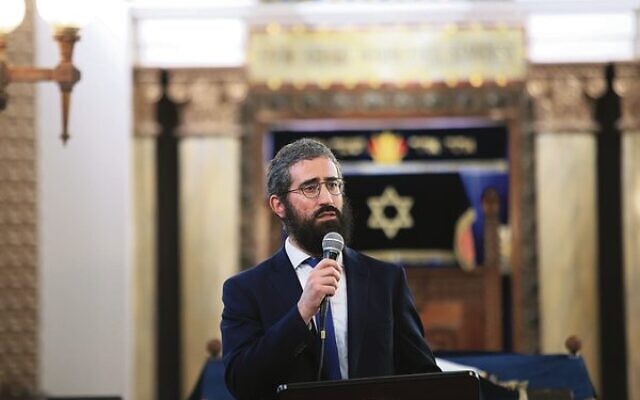 Since 1888, only three main choirmasters have officiated, each serving in excess of 25 years in that role. Firstly, Joel Feldman who was followed by Leo Slutzkin and, on his retirement, by Adrian Bartak who served for over 40 years.

Despite the inevitable changes over time in the composition of its lay and rabbinic leadership as well as its membership, St Kilda Hebrew Congregation remains a unique pillar of the Melbourne Jewish community well placed to enter the second half of its second century – yet still having as active members descendants of some of the founding families.

May the congregation only prosper and go “mechayil el chayil” – from strength to strength.