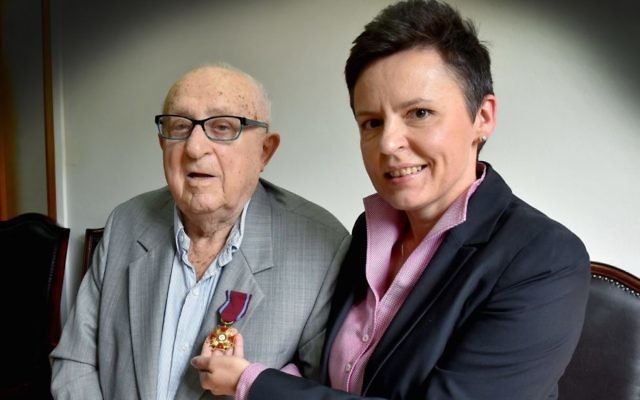 NOT everyone gets personal letters from the Israeli President and the Chief of Staff of the Israeli Defence Forces for their one-hundredth birthday.

But then Julius Nadel, who celebrated his centennial milestone on June 8, has certainly lived an extraordinary life.

He celebrated his milestone with family and friends from near and far on June 10, including a sizeable contingent from Israel, where he has eight grandchildren and 14 great-grandchildren.

Born in Poland in 1918, he fought with the Krakow Army against the Germans in 1939. His division was defeated and he was taken prisoner, but he escaped after only a few days and returned to Krakow.

In November 1940 he escaped from a Nazi deportation transport and went into hiding, only to be arrested by the Gestapo and spend the remainder of the war in the concentration camps Plaszow and Mauthausen-Gusen. His mother perished in Auschwitz.

In February this year his efforts fighting for Poland were recognised with the awarding of the country’s highest award, the Golden Cross of Merit for his service to the independence of the Republic of Poland.

After emigrating to Australia in the early 1950s, Nadel became a stalwart of the Sydney Jewish community, helping to found the Community Security Group (CSG) and JCA, while also serving on the NSW Jewish Board of Deputies and the NSW Jewish War Memorial.

Having had army experience and CIA training, he also became Israel’s point-man for providing security to Israeli dignitaries visiting Australia.

He provided protection for luminaries including Moshe Dayan, Abba Eban and Menachem Begin, who was a personal friend.

In 1976, the Israeli Ministry of Defence awarded him the Decoration to Fighters for the State of Israel, which has been bestowed on only a handful of recipients.

Nadel told The AJN last week, “Israel to me is everything.”Despite his love for the Jewish nation, and his children having made aliyah many years ago, he decided to stay in Sydney. But while far away, his family have remained a source of pride and joy.Sadly, his wife Lita passed away one-and-a-half years ago.

Nadel was also honoured by the Sydney Jewish Museum (SJM), of whom he is a staunch supporter, at a recent tea party at the Montefiore Home in Randwick, where he resides.

Paying tribute, SJM development director Rob Schneider said of Nadel, “Julius is a man who spans generations. He can relate to young people and to old and he is a legend and inspiration to all of us.”