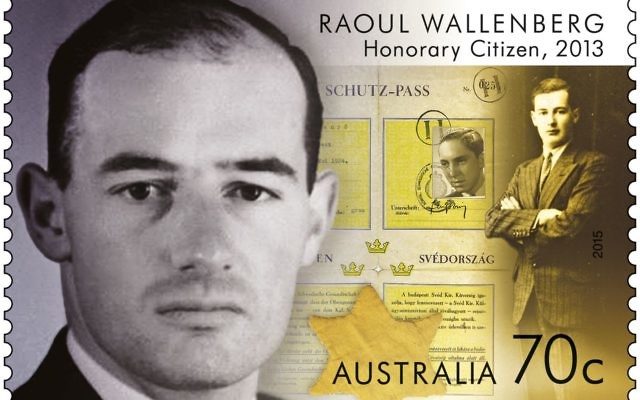 A MASS-circulation Australian postage stamp honouring Raoul Wallenberg, the Swedish diplomat who rescued tens of thousands of Hungarian Jews in the final months of World War II, is set to be issued next month, after a long personal campaign by Judi Schiff of Melbourne.

Wallenberg – who was made Australia’s first, and so far only, honorary citizen in 2013 by then prime minister Julia Gillard – vanished in Soviet custody in January 1945, after issuing protective passports that identified the recipients as Swedish subjects awaiting repatriation.

Possession of the papers, which Wallenberg distributed at risk to his own life, prevented those holding them from deportation from Hungary to Auschwitz.

But Schiff campaigned for Wallenberg to be recognised on a standard Australian stamp, using online petitions platform Change.org, where she gathered more than 520 signatures. Her involvement with the B’nai B’rith Raoul Wallenberg Unit inspired her tireless drive for a Wallenberg stamp.

Along the way, she was supported by Jewish MPs Michael Danby, Mark Dreyfus and Josh Frydenberg, and Communications Minister Malcolm Turnbull, who made a direct approach to Australia Post.

“I’m over the moon that this has finally happened after repeated submissions and requests over decades,” Schiff told The AJN, saying that for years she had been told it was Australia Post policy to only use Australians on stamps, with the exception of the Queen.

However, Wallenberg became Australia’s first honorary citizen in 2013. The new issues, meanwhile, include stamps honouring Mother Teresa and Nelson Mandela, who were not Australians.

At the ceremony conferring citizenship on Wallenberg, then governor-general Quentin Bryce spoke of the Swedish hero’s refusal to be “indifferent in the face of inhumanity and hatred”.

She added that he was “a man whose courage in the face of adversity must be remembered for all time”.

Announcing that Wallenberg would receive Australian citizenship, Gillard said, “The lives of those he rescued are Mr Wallenberg’s greatest memorial, and Australia is honoured to have survivors he rescued living in Australia today.”

The 70c Wallenberg stamp will be available as a first-day cover and card, and will come in various groupings.

It is due to be issued on October 5.