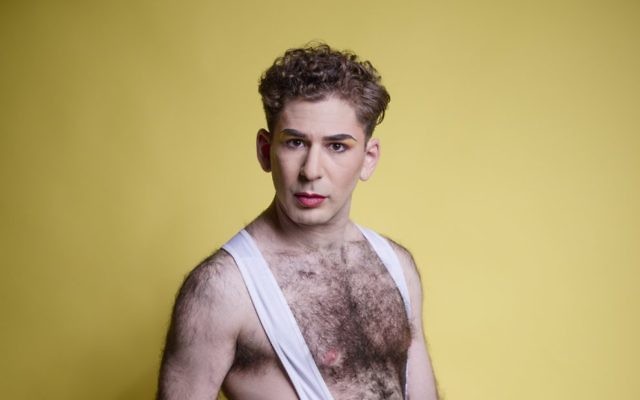 THE Melbourne International Comedy Festival features a record-breaking line-up of more than 600 shows with a mix of local and international comedians, with headline acts including Peter Helliar, Stephen K Amos, Kitty Flanagan, Rich Hall, Jimeoin, and Lano and Woodley.

Festival Director Susan Provan promises shows for every age and taste during the festival, which is held at a variety of venues from March 28 to April 22.

“Clever, funny people from all corners of the globe have packed their entertaining opinions and crazy skills into shows for Melbourne’s comedy fans,” she said.

For fans of Jewish comedians, there’s plenty of choice with local and overseas performers taking part in the festival.

Melbourne comedian Michael Shafar has a new show at the Melbourne International Comedy Festival titled Kosher Bacon.
Shafar, who has been performing stand-up comedy for several years and works as a writer for Channel 10’s The Project, said: “There are similarities between my last show, Jewish-ish, and Kosher Bacon, as I still discuss my personal experiences growing up in the Jewish community, but also talk about new experiences in my life.”

Shafar did two sold-out shows of Kosher Bacon at Perth’s Fringe World earlier this year and also performed it at the Adelaide Fringe a few weeks ago, giving him an opportunity to hone it for the 22-show season at the Melbourne International Comedy Festival.

Shafar, 27, attended Mount Scopus Memorial College and completed a law degree before turning to comedy. He has appeared on SBS’s RAW Comedy, the Laugh Factory’s Funniest Person in the World Competition and Channel 31’s The Leak, and is the creator of satirical web series Round Squares. Jewish-ish was a hit at last year’s Melbourne International Comedy Festival.

Comedian Josh Glanc has been a regular at the Melbourne International Comedy Festival since 2015 when he introduced fans to 99 Schnitzels (Veal Ain’t One), returning with Overfloweth in 2016 and Manful last year.
Now he is back with a new show, Karma Karma Karma Karma Karma Chamedian, which is a combination of stand-up, sketch, singing and physical comedy.

“Melbourne has the premier comedy festival in the world, so it is always wonderful to be part of it,” said Glanc.

He said the show was well accepted by Adelaide audiences and, after Melbourne’s 26-day comedy festival, will head to the Sydney Comedy Festival, followed by performances in Britain and the Edinburgh Fringe.

Glanc, 32, a Bialik College graduate, said that a couple of years ago he decided to give up work as a lawyer and embark on a stand-up comedy career.

“People asked me if I hated law and wanted to get out, but I actually liked my legal work. I just knew that I would be unhappy for the rest of my life if I did not pursue comedy properly – I would always be wondering about not giving it a go.”

Melbourne singer-songwriter Jude Perl has been performing her brand of comedy since she premiered her debut comedy show Is It Just Me? at the 2015 Melbourne International Comedy Festival, which won her a Green Room Award for her songs.

She followed this up with Part Of This Complete Breakfast in 2016 – garnering another Green Room Award – and last year staged Roommates: The Musical, where she explored the share house of people’s minds. The show has received three Green Room Award nominations.

Perl’s new show for this year’s festival, Let’s Hang Out, is an hour of social commentary, catchy tunes and graceful lamenting of the weird things that people do. It is being staged at the Malthouse from April 10-22.

Zaltzman, 43, who lives in London, is host of the hit podcast The Bugle and has been dubbed Britain’s master of satire.

“My comedy is a mixture of satire, nonsense and contrived sporting analogies,” he told The AJN in an interview last year.

“It’s always fun doing comedy in other parts of the world. It challenges you to make a different audience laugh, and it gives you something of an outsider’s perspective.”

Right Questions Wrong Answers is at the Melbourne Town Hall from April 10-22.

American comedian Alex Edelman is back for his third solo show at the festival, performing Just For Us at the Greek Centre from March 29 to April 22.

Edelman, 27, is an observant Jew who isn’t afraid to make jokes about religion during his show.

The New York-based comedian has come a long way since starting out in stand-up more than a decade ago.

“I started doing comedy at a music open mic when I was 15 in my hometown of Boston, Massachusetts and I was just terrible,” he told The AJN in an interview in 2015.

“But I got better … and a couple of Jewish comedians took me under their wing and gave me room to grow and develop.”

In Just For Us, Edelman tackles a variety of topics including tribalism.

American comedian Ari Shaffir returns to Australia with his show Heretic at the Comics Lounge from April 17-21.

Shaffir grew up as an Orthodox Jew and spent two years in a Jerusalem seminary, but later became an atheist.

He is well known for his comedy through his TV specials and podcasts as well as stand-up shows.

Rising comedy star Jacob Sacher teams up with Jack McGorlick for their show, Into the Abyss, which combines improvisation and audience engagement.

The duo, who have been performing together for several years, won the 2017 University of Melbourne Comedy Competition.

Sacher, a member of the ensemble at The Improv Conspiracy Theatre and a performer at the 2017 Melbourne Jewish Comedy Festival, said: “So much comedy is focused on being ‘good sketch comedy’ or good ‘stand-up comedy’. For this show we set out to create the best possible comedic endeavour regardless of pre-existing conventions.”

Into the Abyss is at Tasma Terrace in Melbourne from March 27 to April 8.

Jewish comedian Eli Landes teams up with Mimi Shaheen and Simon Carter for their show, Did We Just Become Best Friends? at Loop Project Space in Melbourne.

Landes takes an emotional journey through family, school and love in the show.

British Jewish stand-up comedian Ivor Dembina, who has been hosting a comedy club in the heart of north London’s Jewish community for 25 years, is bringing his popular show Old Jewish Jokes to the Melbourne International Comedy Festival.

Dembina, 66, features a mixture of vintage and original material in the show, which is set around a comedian invited to perform at a fundraiser at his local synagogue with a shopping list of subjects he is forbidden to joke about.

The show enjoyed success at the Edinburgh fringe festival and is being staged at the Elephant and Wheelbarrow Hotel, Melbourne from March 28 to April 8.

South African comedian Carvin Goldstone, who describes himself as having Jewish, Zulu, Indian and American heritage, presents his show, The Other South African Comedian, at the Malthouse theatre on April 21.

Author, broadcaster and documentary-maker John Safran focuses on the humorous side of how some of his research antics get him into trouble when he presents his show, Jew Detective: Snooping on Extremists at the Comedy Theatre on April 21.

Safran’s book, Depends What You Mean By Extremist, which was published last year, investigates people and groups who hold extremist views in society.

Magic Steven (Jewish performer Steven Harris) returns to the Melbourne International Comedy Festival with Word of Mouth at the Copacabana International, Fitzroy on April 18 where he reflects on his personal experiences.

Over the years Levi has performed his deadpan comic delivery on TV and the stage.

The Melbourne International Comedy Festival is at various venues from March 28 to April 22. Bookings:  www.comedyfestival.com.au