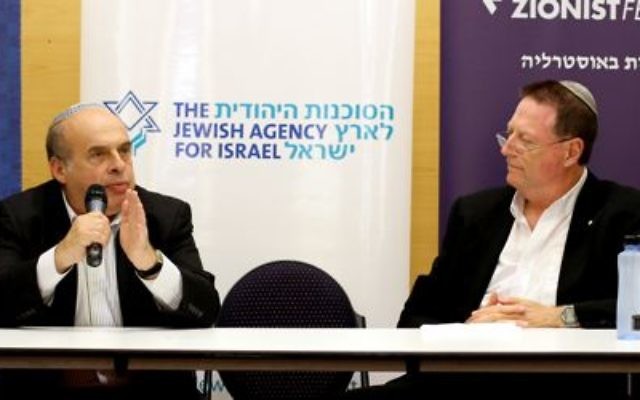 NATAN Sharansky gave a fascinating insight into his journey, from Soviet refusenik to head of the Jewish Agency for Israel, during appearances in Sydney and Melbourne.

The former Soviet political prisoner, Knesset member and Israeli deputy prime minister described his nine years in jail, gave his thoughts on the current situation in his former homeland of Ukraine, described the work of the Jewish Agency and outlined a new initiative aimed at connecting more young Jews to their identity.

In a wide-ranging public discussion with Zionist Council of NSW (ZCNSW) life president Ron Weiser last week, Sharansky said the Jewish Agency’s aim is “to strengthen the connection of every Jew in the world to his people and with the State of Israel”.

“We have to understand that we Jews are one family, but we have very different ways of connecting ourselves to our Jewish identity,” he said.

He spoke about the Jewish Agency’s attempts to reach more young Jews around the world. The program will see the Israeli government, world Jewish organisations and local communities each contribute $100 million per year to a project aimed at “strengthening Jewish identity all over the globe”.

Reflecting on his own experiences, the former chess prodigy – who was arrested and jailed for spying against the USSR in 1977 – described how as a boy he dreamed of being a world champion.

“But then I understand that it is very difficult from a provincial town in the Ukraine to become number one in chess, so I chose to become good in being a political prisoner,” he joked.

He said in addition to playing games of chess in his head, an important factor in surviving prison was “you always have to remember why you are there”.

“But on the other hand, it’s not enough to be serious. You have to know how to laugh … I loved while in prison to tell to the guards any jokes about the Soviet Union. Because they were very funny jokes but they ­couldn’t laugh.

“Then I say, ‘you see, you cannot even laugh when you want to laugh. And you want to say that I am in prison and you are free?’”

Among his other engagements during his trip, Sharansky addressed a group of young adults as part of the ZFA’s new Dor Atid program, aimed at recapturing past youth leaders in the community who have lost their engagement. He also spoke to Australasian Union of Jewish Students members in both Melbourne and Sydney.