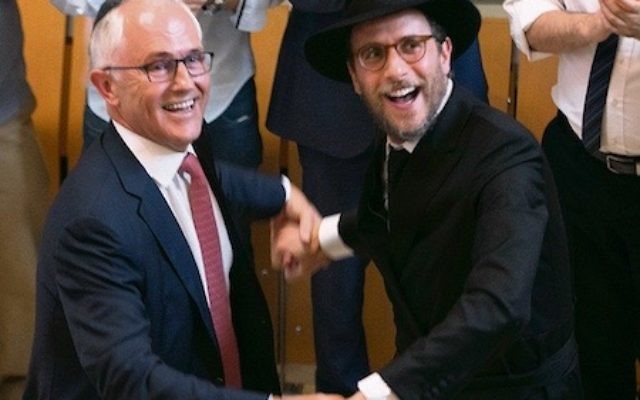 For most Diaspora communities, simply having their nation’s PM pay a visit to a shul would be cause enough for pride.

But for said PM to then cast all formality aside and get up and dance with the shul’s rabbi and chazan would be beyond their wildest imagination.

Posted by The Australian Jewish News on 2016年12月29日

How much more so the naches then if during the visit said PM were to take a public stand against the US and a number of other western powers, openly denouncing an anti-Israel resolution that those countries had willingly waved through the United Nations Security Council just a few days earlier.

The significance of such an event should not be overlooked – it certainly wasn’t lost on the world’s media. Within minutes of The AJN reporting on Malcolm Turnbull’s visit and address to Sydney’s Central Synagogue last Friday on Facebook, news organisations across the globe had picked up and run with the story, and it continued to make headlines for days afterwards.

“Australia has emerged as one of Israel’s few true friends,” editorialised The Jerusalem Post. “We should not take this friendship for granted.” Closer to home meanwhile, congratulating Turnbull and Julie Bishop for condemning the UN resolution and supporting Israel, Rowan Dean, in The Courier Mail lauded the pair for doing “something truly memorable in 2016” and entering “the new year with a worthy achievement under their respective belts”.

As a community, we can take great heart from the fact that we have a government that is prepared to swim against the tide of international public and political opinion, and prioritise principles over playing to the gallery.

Of course, had the UN approved a text that genuinely pushed forward the cause of peace, even if it contained some harsh words about Israel’s West Bank policy, Turnbull and Bishop may well have been far more receptive.

There is, after all, a time for the UN to take a stance. If the international community formulated a balanced resolution on the Israeli-Palestinian conflict, this newspaper too may find itself expressing approval. Such a resolution could raise difficult questions about Israel’s settlement policy, but would need to do so in a context of balanced discussion of the full range of issues holding back the progress of peace.

A resolution of this kind would need to properly acknowledge the layers of complexity in making peace elusive – and that these extend far beyond settlements. It would discuss, in similar detail, challenges like Palestinian violence; the difficulty of making peace when Palestinian politics is in paralysis; and the complex challenge of Jerusalem.

A respectable resolution would need to nod to the issue of refugees – both Palestinian refugees and Jews who were kicked out of Arab countries shortly after Israel’s founding. In a similar vein, a speech by John Kerry could have been welcome if it gave proper attention to this variety of difficulties that make the two-state solution elusive. He could have outlined a nuanced, textured reading of the Middle East, and outlined a path that would have signalled hope to both Israelis and Palestinians, setting out a path Donald Trump could follow.

But instead of choosing constructive bridge-building, both the UN and Kerry went for big diplomatic blows against Israel, without actually making the prospects of peace seem any more realistic.

If anything, it may be more distant with views on the Israeli right now becoming more entrenched. If the UN and US genuinely want to advance the peace process, both should act much smarter.

That said, Benjamin Netanyahu’s reaction to all of this was disappointing. His language should have been calmer, and his accusations against the US sounded argumentative and desperate. Netanyahu was entitled to be deeply disappointed, but he shouldn’t have lost his cool.

A furious reaction may create headlines and distract from corruption allegations at home, but it has not best served Israel’s interests internationally. Israel needs Netanyahu right now at his most convincing, not his most combative.