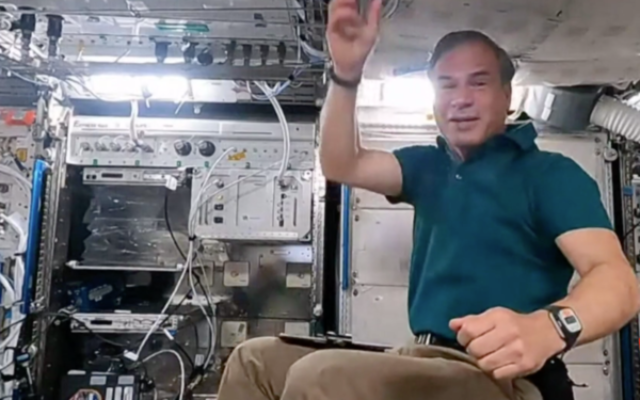 The second-ever Israeli man in space told Hebrew media last Tuesday that he has begun to acclimate to the state of non-gravity at the International Space Station.

Eytan Stibbe was one of four astronauts who earlier this month embarked on the privately-funded Rakia mission that successfully docked at the ISS.

Speaking to the Ynet news site, Stibbe said he managed to get a glimpse of Israel for the first time from the ISS window.

Stibbe said he and his fellow astronauts are now acclimatised enough to move backwards and to be able to orient themselves in all directions.

“It is impossible to practise these physiological sensations when you are on Earth,” he told the Maariv news site.

Their schedule each day starts at 6am when all personnel at the ISS gather at the sleeping area for a check-in. They then eat breakfast and get washed.

At 7am they hold a morning briefing with the 11 astronauts at the station.

They then proceed to carry out the numerous science experiments they were sent to space in order to conduct, Stibbe told Ynet, adding that there is a great deal of camaraderie between the astronauts.

While recognising that there is a degree of risk upon their return to the Earth’s atmosphere, Stibbe isn’t very concerned about making the trip back.

“I feel very safe and trust the tools and equipment we have,” he told Maariv.

Stibbe, a former fighter pilot, is tasked with carrying out 35 experiments for companies and research institutions during the mission.

On Saturday, Stibbe and his three fellow passengers on board the SpaceX Dragon capsule communicated with the control room on Earth, with the Israeli businessman speaking Hebrew.

“Hello everybody,” Stibbe said in Hebrew. “We’ve got used to the lack of gravity by now and have started to feel more comfortable.”

“I have another indicator of the lack of gravity,” he added, while letting go of a toy in the shape of an octopus given to him by his granddaughter before his departure.

“The launch was amazing,” he said. “We are currently over Africa and in 15 minutes we will fly over Israel’s shoreline.”

The first Israeli astronaut, Ilan Ramon, was killed in 2003 when the Space Shuttle Columbia disintegrated upon re-entry into the atmosphere, killing all seven crew members on board. Stibbe plans to pay tribute to Ramon during the mission.