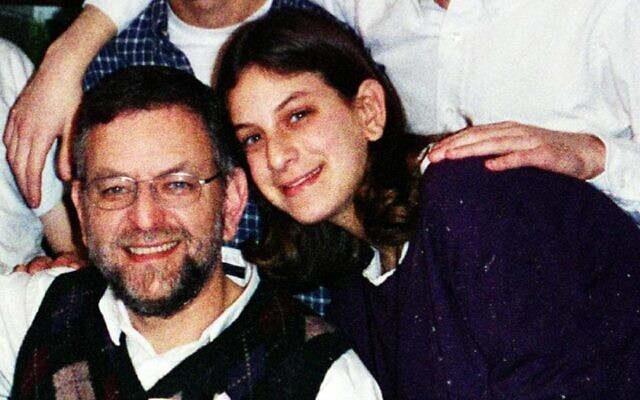 Malki Roth with her father Arnold Roth in January 2001.

ON the 20th of Av this year (July 29), Arnold and Frimet Roth visited the Israeli grave of Malki Roth and recited Kaddish. It was their daughter’s yahrzeit – 20 years after the Australian-born teenager was murdered in a Palestinian terrorist attack at a Jerusalem pizzeria, along with 15 others, including seven children.

“Life was heavy,” Malki’s father told The AJN this week, reflecting on the yahrzeit. “You’re missing somebody desperately and feel awful about the fact that she’s not part of your life.”

But this Monday, August 9, the secular anniversary of Malki’s killing, Roth was back on Zoom and on the phone continuing his relentless campaign to see Ahlam Tamimi, the mastermind of the attack, extradited from Jordan to the US. “The ninth of August … that’s all about justice,” he stated.

Tamimi had picked out the Sbarro pizzeria targeted by her and another bomber on August 9, 2001, her accomplice dying in the attack. Tamimi left the scene disguised as a tourist, later professing her glee as the ever-rising death toll was reported.

Although sentenced in Israel to 16 consecutive life terms, she was exchanged in a 2011 prisoner swap to free Israeli soldier Gilad Shalit from Hamas captivity. She continues to be feted as a media celebrity in Jordan, and, according to Roth, she recently added a regular newspaper column to her stint as a Jordanian TV show host.

In the US, she faces charges relating to the death of two American citizens – Malki, who held dual citizenship, being one of them – and an extradition request was issued in 2017.

But four years on, Roth is still battling three governments to get Tamimi extradited.

For years, the US had maintained its hands were tied because Jordan had not ratified its extradition treaty, a position stated by a Jordanian court in 2017. However, in 2019, Roth learned from an American official that Jordan had indeed ratified the treaty as far back as 1995.

Last year, under US freedom-of-information laws, he even received an archived letter from Jordan’s former monarch King Hussein to the US State Department confirming that fact. He is hopeful this legal development will provide a much needed stepping stone.

Desperate for the Australian government to weigh in, Roth’s entreaties to Malcolm Turnbull when he was PM did not bear fruit. Approaches to Prime Minister Scott Morrison last year were referred to Foreign Minister Marise Payne, whose office cited constitutional problems in Jordan with extraditing its nationals, an assertion Roth rejects because oddly “it goes beyond what the Jordanians say”.

In Israel meanwhile, Roth says his fight to have Tamimi extradited to the US has been “betrayed by a chain of Netanyahu governments and, so far at least, by the new government. Of course, Israel could do something. But Israel has no charges against this woman. Israel has washed its hands of the case.”

Roth’s growing perception is that justice for Malki has become expendable to higher policy priorities in Jerusalem, Washington and Canberra.

“There’s a lot of group-think going on – among Israelis, among Americans, among media people,” he said, describing Tamimi as “the most wanted female fugitive alive today”.

The Roths maintain their ties to the families of other victims of the Sbarro bombing, particularly to a victim who remains “in a vegetative state”, he said.

Arnold remains honorary chair of the Malki Foundation, established in his daughter’s memory to support children with disabilities. Malki had been a caring, loving companion to her severely disabled younger sister and others with special needs.

“A 15-year-old girl who had a legacy – it’s unbelievable, but she did,” exclaimed Roth. “She was so good, so empathetic, so involved in making the world better for children with special needs.”