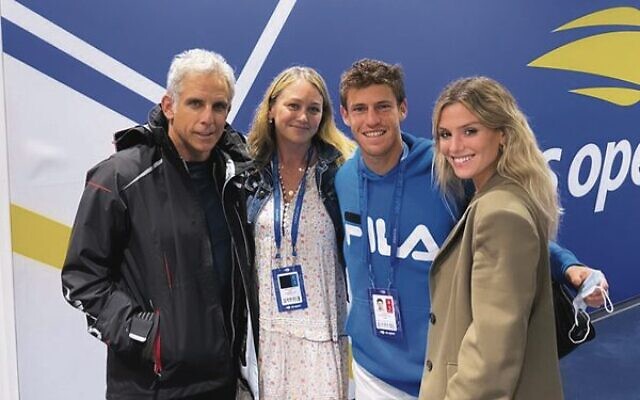 SHMOOZE loves nothing more than a good bromance.

And they don’t get better than Jewish actor Ben Stiller and Jewish tennis star Diego Schwartzman, who first met at the US Open in 2019, when Schwartzman lost to Rafael Nadal in the quarterfinals.

“We took a picture. I put it on my Instagram at that time,” Schwartzman told the ATP Tour website.

“After that we had a very good relationship on WhatsApp. We texted a few times. This year since I arrived in New York, I was in contact with him, texting him.”

During Schwartzman’s rain-soaked round two match at this year’s Flushing Meadows tournament, Stiller was in the stands with wife Christine Taylor, tweeting his support throughout and cheering until 1am.

After the match, Schwartzman’s girlfriend, Argentine model Eugenia De Martino, posted to Instagram a photo of all of them meeting, saying, “Ben and Christine came especially to watch Diego.”

Stiller, not a big tweeter, then tweeted nine times in support of Schwartzman during his fourth round loss to Dutch qualifier Botic van de Zandschulp.

Then after the promising young player was eliminated from the Open, the two spent more quality time together. On second night Rosh Hashanah, the Jewish tennis star’s girlfriend posted a photo of the three of them at a New York restaurant, captioned “Date night.”