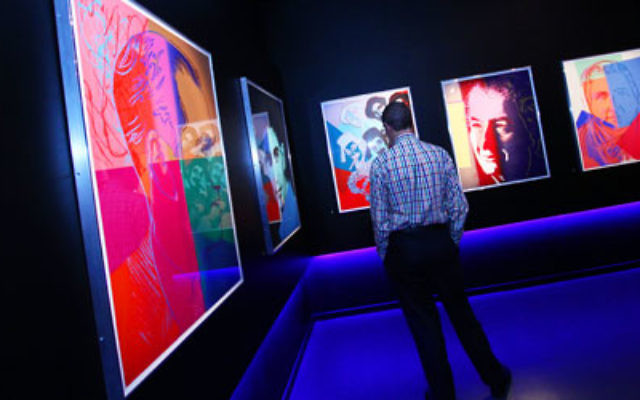 It turned out that the gallery space that Feldman was renting in New York had once been used by Warhol, and the artist made regular Saturday morning visits to it while walking his dog.

On one visit Warhol asked Feldman if he had any suggestions for an art project that they could collaborate on.

“I thought he must be joking – asking me to come up with an idea for his works,” recalled Feldman in an interview with Dr Danielle Spera, the former Austrian journalist who is now director of the Jewish Museum Vienna.

Feldman replied: “Let’s do 10 presidents of the US.”

But Warhol did not like the idea and kept asking for new suggestions.

Feldman added: “One day I called his workplace and suggested ‘Ten Jews of the 20th century’. He replied ‘Great’, followed by a question: ‘Who are they?’”

Feldman had prepared a short list of three names and suggested they get together to talk about it.

Warhol replied, “Yes, absolutely”, and that was the genesis of his Ten Portraits of Jews of the 20th Century exhibition that had its first major showing in 1980 at the New York Jewish Museum. It has continued to be a talking point whenever it is exhibited.

Now the 10 portraits have come to Melbourne for an exhibition which opened on November 20 at the Jewish Museum of Australia (JMA) titled Andy Warhol’s Jewish Geniuses.

Warhol referred to this group of great thinkers, politicians, performers and writers as his “Jewish geniuses” and “famous Jews” and “the 10 Jews” – he never called it “Ten Portraits of Jews of the Twentieth Century”, which was the title that Feldman’s gallery came up with.

How did Warhol narrow down the list of more than a hundred great Jews to his final selection?

Feldman explained: “We never had a list of all 10 at one time – we had a top three or four that we started to work with. The first and important decision was, what did this person achieve in their lifetime. And then, of course, they had to be Jewish.

“Bob Dylan was considered at one point on the list, but he had become a born-again Christian. That sort of eliminated him.”

It was a combination of factors that led to the final selection, including their contribution to the 20th century, their Jewishness and whether the image would make a good portrait.

Warhol, a Catholic, never discussed Judaism with Feldman during the selection process.

In the interview Spera asked Feldman whether Warhol ever attended a Jewish festival or a Shabbat dinner, to which he replied: “No. But we never went to church together either.”

The son of Slovakian immigrants in working class Pittsburgh, Warhol loved New York’s social life and was said to have gone out every night. After Studio 54 opened, it became his favourite social hangout where he enjoyed the company of stars such as Liza Minnelli and Bianca Jagger.

By 1980 Warhol was a household name, having produced hundreds of commissioned portraits of celebrities, but the exhibition of Jewish geniuses would be different, because it featured people who were no longer alive and was based on archival photos that Warhol enlarged, partially redrew and overlaid with high-contrast colours.

When the exhibition opened at the Jewish Museum in New York in 1980, The New York Times published a vitriolic review by art critic Hilton Kramer.

He wrote: “To the many afflictions suffered by the Jewish people in the course of their long history, the new Andy Warhol show at the Jewish Museum cannot be said to make a significant addition. True, the show is vulgar. It reeks of commercialism and its contribution to art is nil.”

But other reviews praised the exhibition and in recent years Warhol’s Jewish portraits have been popular wherever they have been exhibited.

The most recent exhibition was at Jewish Museum Vienna in 2012, and since last year the JMA has been assisted by the Vienna museum in the preparation of the Australian exhibition.

JMA collections and exhibitions manager and curator Peta Cook says: “After the Vienna exhibition was over, all the works went back to the lenders in different parts of the world.

“Some were private lenders and some were from museums, so the Vienna Jewish Museum gave us the rights to use their exhibition concept and assisted us in contacting the lenders.

“We organised for the works to be freighted to Australia for the exhibition.”

Cook has been working on the JMA exhibition since mid-2013.

She says the Jewish Museum’s exhibition features all of Warhol’s original screen prints.

“We also have one of paintings – of Golda Meir – that has come from Israel, plus one of Warhol’s preparatory sketches for the painting,” she says.

The exhibition includes background information about the subjects and copies of the source photos used by Warhol.

“This is the first time that Warhol’s Jewish Geniuses have been seen in Australia. It is really amazing to be up close to original Warhol works,” Cook says.

“We also have Warhol’s painting of Loti Smorgon, from a sitting that she did in his New York studio in 1981, which is on loan from the National Gallery of Victoria,” she says.

The JMA also has on display other works by Warhol along with videos about his artwork.

Andy Warhol’s Jewish Geniuses is at the Jewish Museum of Australia, 26 Alma Road, St Kilda until May 24, 2015. Enquiries: www.jewishmuseum.com.au.