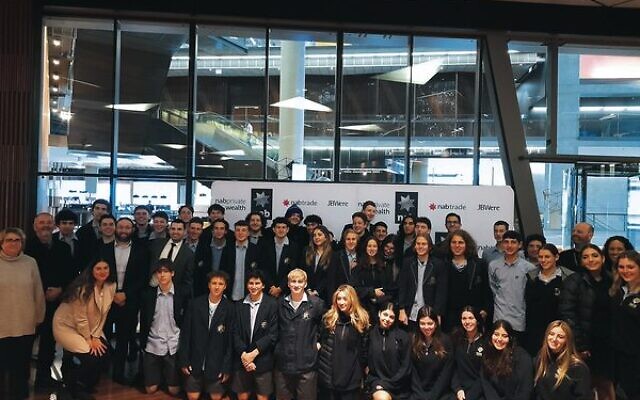 Students from Jewish schools at a banking education seminar at NAB's Melbourne head office on September 5.

MORE than 120 secondary students from six Jewish schools enjoyed the opportunity to hear insights firsthand from top NAB executives at the bank’s Melbourne head office at Docklands on September 5.

At the invitation of NAB Private Wealth senior managers Daniel Yesgar – from JNF – and Brent Pitman, the day started with a kosher breakfast for students from Bialik College, The King David School, Mount Scopus College and Leibler Yavneh College, followed by a series of talks on the future of banking and business.

The event followed a similar one held in June at NAB’s Sydney head office, for 70 students from Sydney’s Jewish schools who are studying business studies or commerce.

Discussions were led by NAB and JBWere management team members, including former King David School student Winson Lewinsmith, who spoke of the latest opportunities and challenges in the cybersecurity space.

The seminars covered topics from the use of satellite technology in banking – particularly in relation to lending for agriculture – to how forms of fixed income investing work, such as bonds and hybrids.

Caulfield Shule’s Rabbi Daniel Rabin also attended, and spoke to the students about the significance of the upcoming High Holy Days.

Students were given the opportunity to ask questions to the various presenters in the final session, and enthusiastically did so for almost an hour, further exploring topics such as the future of Bitcoin, and blockchain technology.