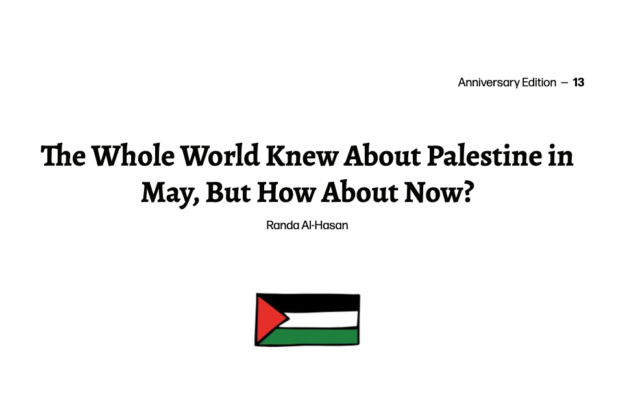 The article, "The whole world knew about Palestine in May, but how about now?" which was published earlier this month.

THE Australasian Union of Jewish Students lamented that anti-Israel rhetoric was “rife” on campuses across the country as Israel’s right to exist was challenged at two different universities in recent weeks.

In an opinion piece for University of Tasmania student publication Togatus, a contributor said she refused to capitalise the word “Israel” because it is “an occupation”.

The article, “The whole world knew about Palestine in May, but how about now?” which was published earlier this month, condemned “The israeli settler-colonial occupation” and concluded “From the river to the sea, Palestine will be free.”

An endnote explained, “The non-capitalisation of ‘israel’ is purposeful and used to demonstrate its illegitimacy as a state. Hence why it is also never referred to as solely ‘israel’ but as an occupation.”

The AJN reached out to the editors of the publication for comment but received no response.

In a Facebook post written by a member of Students for Palestine, LTSU president Jake McGuinness was attacked for calling the slogan “pathetic antisemitism”, and for condemning any calls to dissolve Israel as “despicable”.

“We know that antisemitism is always used as an excuse to discipline pro-Palestinian forces,” the poster said, adding it was “pretty gross” that McGuinness would defend Israel.

McGuinness told The AJN, “Israel’s right to exist is not a matter for debate or discussion.”

He added, “‘From the river to the sea’ is an antisemitic statement, no amount of twisting the meaning changes that, and I was glad to be able to stand with Jewish students of La Trobe and vote this motion down.”

Thanking McGuinness, AUJS public affairs coordinator Gabi Stricker-Phelps said, “Besides being factually inaccurate and misleading, this motion is deeply offensive to our community.

“Delegitimisation of Israel as the Jewish State is a form of antisemitism and should not be tolerated on any university campus,” she said, adding, “Unfortunately, this anti-Israel rhetoric is rife on Australian university campuses.”