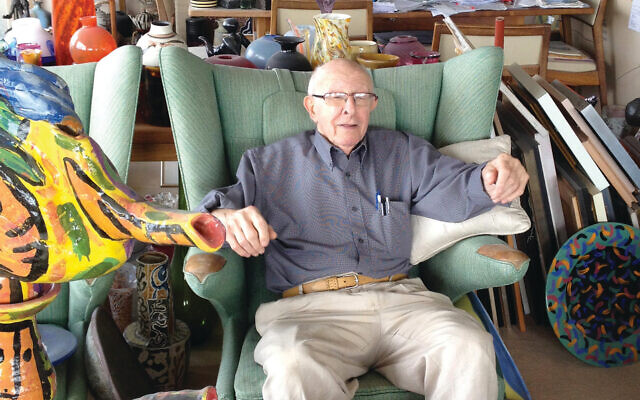 Featuring more than 1200 lots of jewellery, art, sculpture, art glass, porcelain, decorative arts and mid-century Danish designed furniture, Harry Oviss truly amassed an impressive collection. Oviss was a doyen of the Australian art scene over many years, befriending artists and feverishly collecting and supporting the arts wherever he could.

Born in Jaffa, where his family moved from Poland, the family migrated to Australia when Oviss was 11 months old, searching for a better life. Oviss, influenced by his parents’ successful coat business and The Great Depression, always had an insatiable goal to becoming a businessman. He became a successful clothing and fashion magnate with an exclusive knit-wear shop in the Block Arcade. In fact, he was one of the youngest people to lease a shop in the CBD at the time.

Turning to property and development, Oviss cemented himself in Australia as a self-made man, with his interest in building and architecture spilling into a passion of the arts. Stemming from this, was his enthusiasm for collecting.

Over 84 years, he collected items from all walks of artistic life, especially modern and contemporary art, immersing himself the contemporary art world and becoming a regular visitor to galleries and auction houses.

Mid-century Danish designer furniture is represented with some iconic pieces by Hans Wegner. Last but not least is the fabulous collection of modernist designer jewellery by the likes of Gary Bradley and Matcham Skipper.

Harry always felt connected to the Jewish community, never distancing himself from the traditions of his roots. At a young age, he actively participated in his local Carlton Synagogue assisting with services and the congregation. This foundation in Judaism created a lifelong desire to be embedded in Jewish culture and community. He was very charitable and often supported Jewish causes and Jewish sporting clubs, like golf, bowls, and bridge. He was also a proud 75-year member of Melbourne Hebrew Congregation (Toorak Shule).

Harry passed away in January 2021, aged 97 and is survived by his two daughters Irene Messer and Greta Grossberg.

Oviss’ private collection will be auctioned off this weekend, with the sale estimated at between $500,000-800,000.