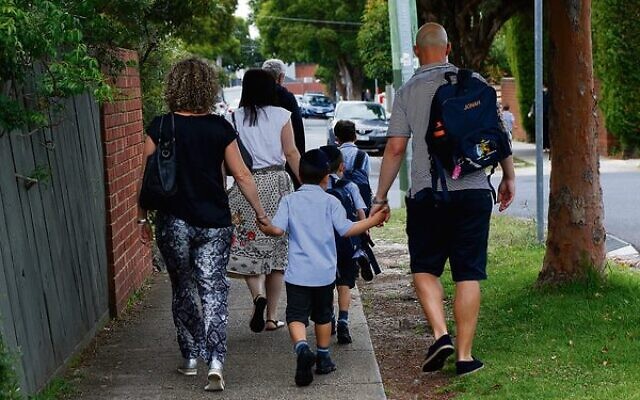 Students at Sholem Aleichem College on the first day of school in 2019. Photo: Peter Haskin

About a year ago, some members of Melbourne’s Jewish community published a discussion paper, Rethinking the Future of our Schools. We were a self-selected group, former educators, school council members and parents with connections to the four main Jewish day schools: Bialik College, King David School, Leibler Yavneh College and Mount Scopus Memorial College.

We wrote our paper out of concern that escalating fees – as high as $39,000 for a year 12 student at some schools – were putting an education at a Jewish day school out of reach for many families. The Gen17 report had already shown that about a third of Jewish families across Australia wanted to send a child to a Jewish school but could not afford it.

It’s fair to say that our paper lit a fire in our community, as we hoped it would. More than a thousand people attended forums to discuss the paper. More than 1400 joined the Jewish Schools Facebook group.

What emerged is that our community wants to discuss Jewish education and what that means today. Of the estimated 9000 Jewish children of school age in Victoria, about 4000 attend government and private non-Jewish schools, and this proportion is growing. The families of these children have made it clear they want to be part of the conversation, and that their school decisions do not in any way indicate a reduced commitment to Jewish education and Jewish life.

A year later, the group that authored the 2021 paper has formed the Jewish Education Foundation to add practical action to this vital debate. The four Jewish schools named above, plus Yeshivah–Beth Rivkah Colleges and Sholem Alecheim College, have come together with the foundation to offer places at an affordable fee to Jewish children enrolled in government schools.

Under a two-year pilot program, these children can apply for a limited number of unfilled school places for the academic years 2023 and 2024. Applications, which close on July 31, are anonymous. A new, independent fee assessment board (FAB) will assess applicants’ capacity to pay fees based on a model that examines a family’s income, assets and liabilities but not personal expenditure.

Given how much these schools cherish their independence, this is a historic partnership.

After we published our 2021 paper, we hired a Monash University research team to consult our community on options for the future of Victoria’s Jewish schools. A big majority of people surveyed saw the status quo – a growing proportion of our families unable to afford fees – as unacceptable.

But most participants also thought that of the other main alternatives put forward in the paper, school mergers were either undesirable or unrealistic. The creation of a new VCE school as a senior secondary college for the whole community sparked a lot of interest but, again, it was not seen as feasible at this point.

What participants did support was the creation of a fee assessment board to provide an independent channel for filling more places in Jewish schools. Although schools already provide many places at discounted fees – a fact that many parents appreciate – they have endorsed the FAB’s model and arms-length process.

The anonymity of the FAB process is crucial. Each school tells the FAB how many places it has available at each year level. A family applies online and receives a fee assessment and an offer of a place, if one is available. If the family thinks the fee is too high, it simply withdraws its application, and no one knows.

A child allocated a place will be guaranteed that place for the remainder of his or her school life (subject to normal terms and conditions for ongoing enrolment) for a fee assessed annually. The initiative will also benefit the schools and their children by generating more fee and grant income.

The current 700 vacancies in the schools are a waste of resources, and children are missing out. The participation of all these schools sends a strong message: where there are vacancies and a family is prepared to pay what it can afford, our community has a duty to try to fill that vacancy.

The FAB is just one initiative in addressing concerns about the future of Jewish education. As more Jewish children enrol in non-Jewish schools, we must think about how we support organisations that provide Jewish education outside the day schools.

We have much further to go, but in the creation of the foundation and the FAB, we have taken important steps to enable more children to attend Jewish schools, in a way that gives their families certainty, dignity and choice. And we have initiated a debate that reminds us of the place education holds at the heart of Jewish life.

Alan Schwartz is chair of the Jewish Education Foundation.
Read the 2022 paper, Rethinking Jewish education in Victoria, and information on the foundation.