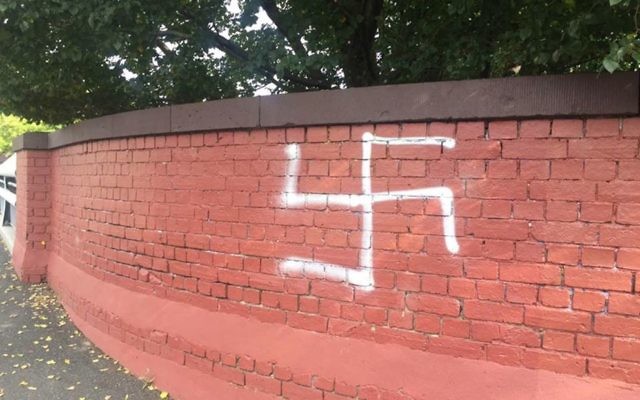 A swastika has been scrawled in the Melbourne suburb of Windsor.

THE Andrews government has brought forward a ban on public displays of swastikas from 12 to six months.

Last month, Premier Daniel Andrews announced the ban, in the Summary Offences Act, will make it a criminal offence to intentionally display the Nazi swastika in public, with offenders facing penalties of up to almost $22,000, 12 months’ imprisonment or both.

But after calls from Deputy Liberal leader and Caulfield MP David Southwick and the state opposition to bring the prohibition in immediately, the government this week accelerated its introduction.

The AJN understands the 12-month lead-in was to enable an education campaign to help communities distinguish between the Nazi symbol and the ancient swastika, which has cultural significance for some faith communities. However, a six-month period means displays of swastikas can be dealt with sooner, while still allowing time for the offence to be properly implemented.

“We’re deeply concerned by the recent increase in the public display of Nazi symbols in our community. It’s unacceptable and exactly the conduct this bill intends to stop,” a Victorian government spokesperson said.

“Victoria is a multi-faith and diverse community – it’s important that before the laws come into effect, we inform Victorians of the important symbolism of the swastika to Buddhist, Hindu and Jain communities.”

“As important as these laws are to send a message that there is no place for hate in Victoria, unfortunately we have fired the gun without bullets,” he said this week.