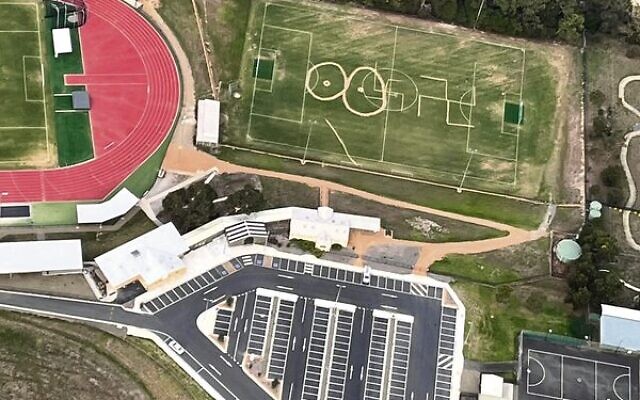 The offensive Nazi symbols, carved into the turf at a venue used by Lilydale Eagles Soccer Club at Mount Evelyn in Melbourne’s outer east, were spotted by a Jewish man during a helicopter flight.

While on the private chopper flight last Friday, the man, a grandson of Holocaust survivors, noticed the swastikas – burned into the grass at Morrison Reserve with weedkiller – and reported them to the Anti-Defamation Commission (ADC).

In a joint statement with shadow minister for multicultural affairs Andrew Giles, Burns said, “It’s incredibly concerning to see the latest example of a Nazi swastika being displayed in public.

“To have a Nazi swastika of this size is extremely confronting and shows a calculated, sinister intent beyond any casual graffiti.

“There is no place in modern, multicultural Australia for Nazi symbols of any kind. This will be especially distressing for Holocaust survivors, their descendants and members of the wider Jewish community and our thoughts are with them. Australia needs a new national anti-racism strategy.”

ADC chair Dvir Abramovich added, “This is not just graffiti on the ground – it is a frontal assault on our values … We hope that Victoria Police identify the perpetrators and deal with them to the full extent of the law.”

Contacted by The AJN, Eagles president Roger Taylor said Yarra Ranges Council, which owns the venue, had been notified about the defacement last month, and is re-seeding the area.

The swastikas even made the news in Israel, being reported on Channel 12.