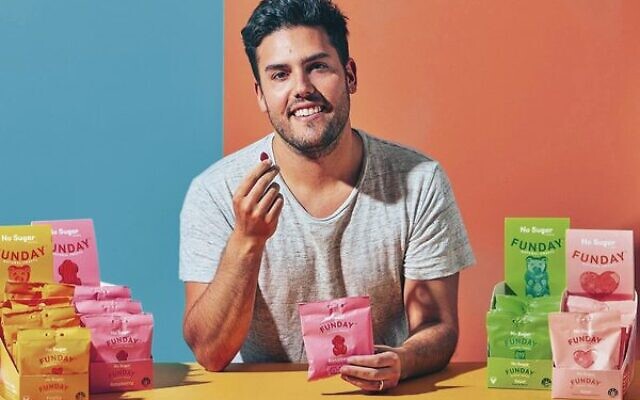 Perth-raised, Melbourne-based Daniel Kitay admits to being “a pretty big kid” growing up.

He wanted to be healthier, but the sugar-free alternatives to his favourite sweets didn’t sit quite well either.

“The confectionery market was really dominated forever by the big multinationals, those are rife with the sugars that have been causing obesity, diabetes, issues with teeth and all sorts of stuff,” he said.

“And then the sugar-free products in the market are fine for people with diabetes, but typically, their replacements for sugar are really terrible artificial ingredients which don’t agree with a lot of people.”

They say necessity is the mother of all invention, and the qualified lawyer – who served as Australasian Union of Jewish Students (AUJS) national president in 2009 – was inspired to fill this gap in the market.

Funday Sweets launched during the pandemic and after initially being picked up by Chemist Warehouse is now also on the shelves of Woolworths.

In a short space of time, the business has been a resounding success.

Kitay paid credit to his team for “just how well we’ve managed to get out into the market” .

“It’s really good recognition for the hard work in a short amount of time,” he said.

Looking to the future of its product line, he said the business is still trying to make its mark, and to get things right “we’re conscious not to go too big too quickly”.

“We’ve got a huge category to play in. For me that means that we can do a lot and we don’t need to expand too quickly,” he said.

Funday however plans to launch into New Zealand, and a number of countries in the Middle East and southeast Asia. Kitay said he is looking at Europe for the end of 2023.

“We launched during COVID so the supply chain has been really challenging, there’s been a war since we started, interest rates are up … we pretty much launched in one of the worst times,” he said.

“So once things settle, we’ll be in a really great position.”