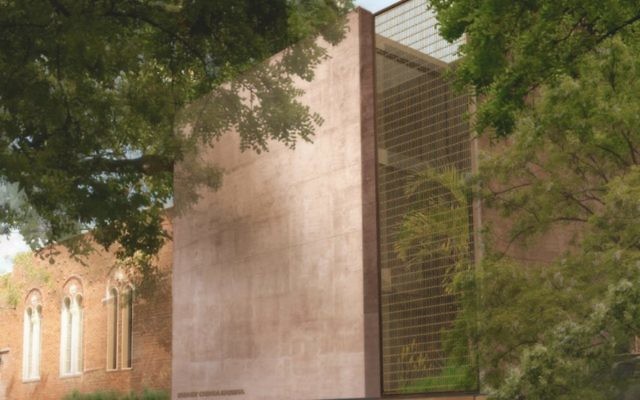 Design for the Sydney Chevra Kadisha's new entrance and foyer extension in its Woollahra building.

DONATIONS to the Sydney Chevra Kadisha will be tax deductible for the next two years to help it raise money for a multi-million dollar building upgrade.

The organisation, which has just turned 200, has been given the approval by the Federal government to help it continue serving the community for the next 100 years.

A lot has happened and changed since a small group of Jews in Sydney formed a society – a ‘holy brotherhood’ – to perform the last rites according to Jewish tradition for Solomon Marks, whom they buried on October 17, 1817.

The society performed Jewish burial rites in conjunction with early Sydney synagogues in George and York Streets – and from 1878 The Great Synagogue – and transported coffins by horse and cart.

Growing demand led to the creation of a stand-alone organisation renamed the Sydney Chevra Kadisha in 1912, by Rabbi Francis Lyon Cohen and Reverend Marcus Einfeld.

It operated 12 years later from premises in Chippendale, close to the ‘mortuary train station’.

Rapid growth of Sydney’s Jewish population led to a decision to acquire a large triangular block on the corner of Oxford and Wallace Streets, Woollahra in 1944 for a new headquarters.

The foundation stone was laid in 1948 and the iconic red brick building was consecrated by Chief Rabbi of the Commonwealth, Dr Israel Brodie, on March 23, 1952.

In a sign of how things have evolved, today the Sydney Chevra Kadisha offers a live streaming service of funeral ceremonies so that mourners around the world can register and login to watch.

It’s president for the last six years, Dr Mendel Monk, described the 200th anniversary as a “landmark milestone”, and the organisation as “quite unique in Australia because of how it services the whole Jewish community – from completely non-observant Jews to the ultra-Orthodox”.

“It’s very dignified and respected, is held in very high esteem by the community, and has a lot of dedicated volunteers,” Dr Monk said.

The Sydney Chevra Kadisha is facing increased demand for its services and is launching a capital appeal to raise funds for a major and much-needed upgrade of its Woollahra building, built almost 70 years ago.

“The building has a mix of security, capacity and functional issues that need to be addressed,” Dr Monk said.

“This upgrade will do this, and the chapel’s expansion will help solve the current security issue of having an overflow of people [mourners] onto the footpath outside.