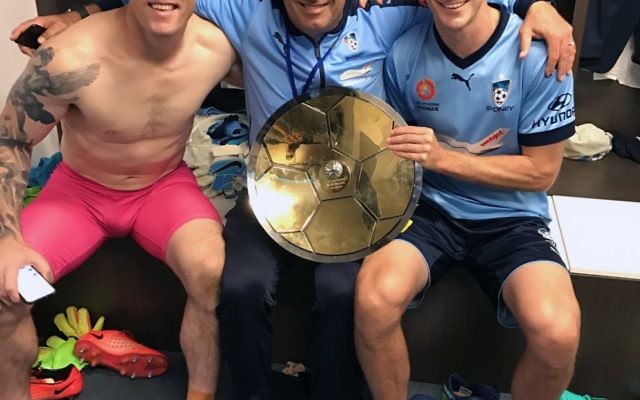 AFTER an almost flawless seven months of football Sydney FC capped off an historic season by defeating Melbourne Victory in a penalty shootout in the A-League grand final on Sunday night.

The record-breaking season, with only one loss, wasn’t just about the players.

Swibel, who is also the team manager of the Australian Maccabiah youth football team, told The AJN that when Milos Ninkovic’s winning penalty hit the back of  the net “everything turned into sheer pandemonium. It was just unbelievable.”

“We ran onto the field and the first person I saw was [Head of strength and conditioning coach] Andrew Clark. Then I saw a group around Vuka [Danny Vukovic], so I jumped on them. I saw Brandon O’Neill lying on the ground, so I had to jump on him and give him a hug.”

Swibel sat behind the Sydney FC dugout on Grand Final day, much like he does during the season.

He tends to players’ needs, tracks the extra time to keep coach Graham Arnold in the loop and is in constant communication with the bench.

“I help former captain and current football manager Terry McFlynn with anything that’s needed to be done,” Swibel said.

“From ticketing for players’ family and friends to admin stuff to running down the tunnel for the players on the bench.”

Swibel recognised the hard work of everyone at the club saying they prepared for the A-League decider like it was just another week.

“We called it Gameweek 28 versus Perth and Gameweek 29 versus Victory.

“We knew it was the Grand Final, but we wanted to keep preparation as normal as possible.”

The players have been celebrating their record-breaking season with public appearances and private dinners before they come back in for a training session this week.

“They’ll come in for one session before our match against Liverpool on May 24 and then they’ll take a well deserved break.”

Swibel and the Youth League team continue their National Premier League season until August before a small break and the commencement of the National Youth League later this year.