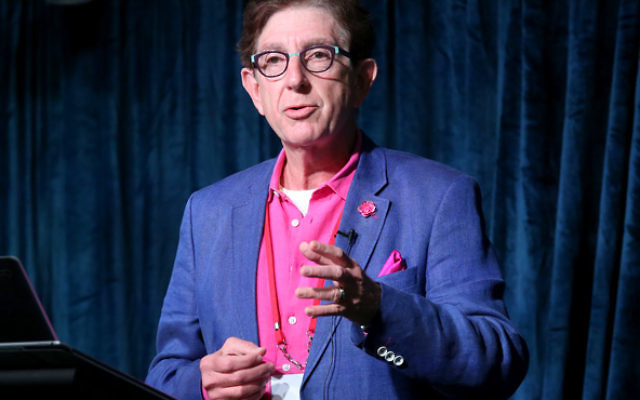 SYDNEY Jewish Writers Festival (SJWF) director Justine Saidman explained the thought bubble behind this year’s event was to ensure a broad, eclectic mix of issues were explored through discussions by Australian and international writers from all walks of life.

“For me, the highlight has been the diversity of topics and writers’ voices this year,” she said. “There was certainly something for everyone – from the light-hearted and comedic to gripping thrillers to Israeli politics and wonderful, deeply moving memoirs.

“Some presentations were particularly emotional.

“There was a very special moment when Australian director (of the film Lore, based on fellow festival guest, British author Rachel Seiffert’s novel The Dark Room) Cate Shortland was moved to tears when speaking about the grandparents of her husband (Tony Kravitz) who were Holocaust survivors.

“It seemed like the oxygen was suddenly sucked out of the room; when everyone in the audience was taking a collective breath.”

Like he does with his thriller novels, John M Green kept his Sunday afternoon SJWF audience in the palm of his hand during a lively presentation about his latest release The Tao Deception, using photographs, charts, and at one point a flashing special effect that mimicked a miniature explosion.

The book, he explained, explores what could happen if a rogue nation like North Korea is able to launch an electromagnetic pulse nuke – an existing technology – onto one of its satellites that already crosses over the US and Australia daily, capable of instantly frying all electrical devices and power supply networks in its path.

“Now my main character Tori Swyft had a new mission, and I needed a villain, so who better than this guy, Kim Jong Un,” Green said.

A satisfied audience gave Green a big cheer for his effort and energy, before settling in for an interesting exploration by Israeli academic and political commentator Gadi Taub of the opposing streams of secular and religious Zionism, a topic he tackles wholeheartedly in his new book The Settlers.

“Zionism has always had an element of returning to the Jewish homeland and that can only be in one place, Israel,” Taub said.

“But [secular] Zionism is also about Jewish self-determination, and this depends on limiting it to a territory where Jews are a majority.”

Another festival drawcard was John Safran, who delved into the event-filled research process for his latest book Depends What You Mean By Extremist, hanging out for two years with folk including Aussie ISIS supporters, anarchists and white nationalists.

“What I like looking at are the tangles in society – and I thought I’m going to just jump down this rabbit hole, but there were some weird things I came across that were hard to pin down,” Safran said.

“And I came across Skinheads Against Racial Prejudice – yes, that’s an actual group.

“One of the things I write about in my book is how all these radical people try to present themselves as normal Australians and are having success in bringing up their numbers, as long as they can keep that conceit up.

“But then their cracks start to show, like a guy from the United Patriots Front who wanted a picture of Hitler in every classroom – that kind of gave it away!

“People do talk about my work, and I think in my own weird way I’ve got a lot of raw material in this book that wasn’t there before, and now we can ponder or ruminate on it all.”

Saidman said early feedback she has received about the festival, which is produced by Shalom, is overwhelmingly positive. Most comments touched on the variety offered in this year’s program.

“There was also a lot of praise for the outstanding live musical performance by Masha’s Legacy on opening night (Saturday).

“And many of the presenters have told me how much they’ve personally enjoyed the event, including our three international guests – Gadi Taub (Israel), Amy Gottlieb (New York-based author) and Rachel Seifert (UK).

“Gadi said he will go back to Israel and spread the word about the festival, and we’re so pleased he feels that way.”