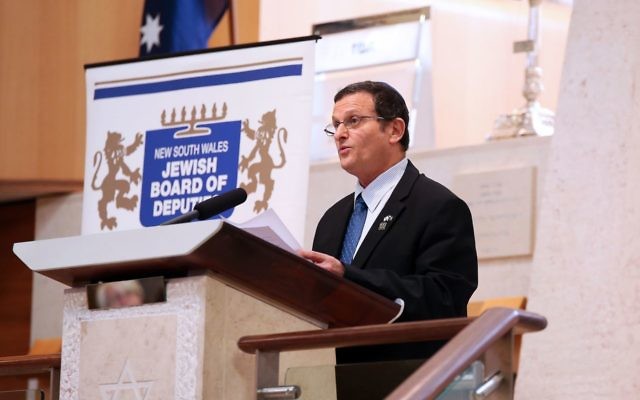 AROUND 1500 people gathered to show solidarity with Israel at Central Synagogue on Sunday.

Addressing the congregation, Israel’s Ambassador Shmuel Ben-Shmuel said Operation Protective Edge would continue until its goal was reached – “restoring quiet to Israel’s citizens for a prolonged period, while inflicting a significant blow to the infrastructures of Hamas and the other terrorist organisations”.

He said Israel could not accept a reality in which millions of its citizens were subjected to the whims of radical Islamic terrorist organisations, under immediate threat, with as little as 15 seconds to find shelter from incoming missiles.

“It is because of this same ideology that Hamas would rather deliberately embed its military operations deep in residential areas, and exploit its own civilian population as human shields.”

He said that when under attack, Israel has the right to self-defence and is obligated to act decisively for its citizens. “Israel’s actions are measured and directed at the missile launchers and the terror infrastructures of Hamas, which have turned the Gaza Strip into the centre for attacks against Israel.”

Ben-Shmuel joined communal leaders and the public in reciting prayers for the State of Israel and its troops. Speaking to The AJN at the gathering, Ben-Shmuel said: “All of us, all like-minded people, should stand firm against these vicious ­terroristic attacks against civilians.

“I’m sure … we’ll overcome our adversaries who aim at the destruction of the State of Israel.”

A minute’s silence was observed as the community mourned the loss of civilian lives in Israel and Gaza, as well as remembering the 85 victims of the bombing of the AMIA Jewish Centre in Buenos Aires, which marked its 20th anniversary last Friday. Communal leaders also expressed their condolences to the families of those who were on board Malaysia Airlines flight MH17, which was shot down over east Ukraine, killing 298 people.

“Today we really are not here to cry, but … to mourn and to extend our condolences to the families of the IDF soldiers and the Israeli civilians killed in this battle, and of course to the Australian families as well as the hundreds of others around the world, whose lives have been ripped apart by different terrorists firing different rockets – this time at a civilian aircraft – but still posing the same threat to world order,” Zionist Council of NSW president Richard Balkin said.

Israel’s shaliach to Hineni and Central Synagogue Aaron Kalman – who served in the IDF for three years and now has two brothers serving, one of whom is in Gaza – said: “At times like this we join in the prayer of Acheinu, meaning ‘our brothers’. Through these powerful words we raise our voices in a communal prayer that our brothers and sisters be kept safe and protected from harm, and that everyone be able to return safely to their homes.”

NSW Jewish Board of Deputies president Yair Miller added: “We hope and pray that the rockets will stop. That the tunnels will be speedily found and destroyed and that quiet can be restored and lives saved in Gaza, and the south and centre of Israel.”

The event was co-hosted by the NSW Jewish Board of Deputies and the Zionist Council of NSW.