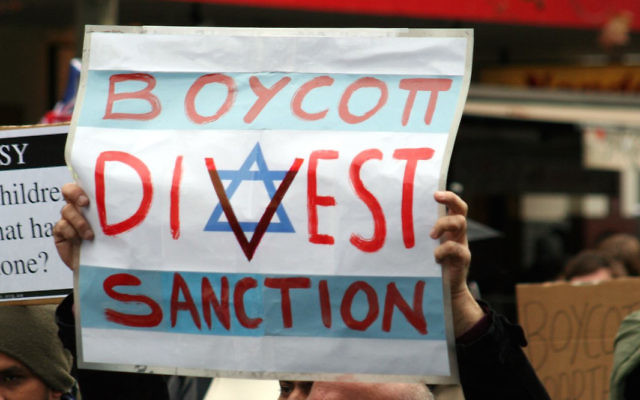 A BDS demonstration in Australia.

JEWISH leaders have hit out at a “blatantly anti-Israel hate-fest” set to take place at the University of Sydney next week, with the university dissociating itself from the inaugural “BDS – Driving Global Justice for Palestine” conference.

The two-day forum, hosted by the university’s Department of Peace and Conflict Studies, Sydney University Staff for BDS, and a range of pro-Palestinian organisations, is believed to be the biggest ever held on boycott, divestment and sanctions (BDS) in Australia, and the first time that an academic department at an Australian university has officially sponsored and hosted such an event.

Held on July 28-29 – to coincide with the NSW Labor state conference, where a proposed motion urging the next federal Labor government to recognise Palestine will be put forward – the conference will cover topics including “Zionism and BDS”, “freedom of speech, academic freedom and BDS”, “anti-Semitism” and “the Israel lobby”.

A spokesperson for the university said the institution is “strongly committed to academic freedom and to being a forum for debate on a wide range of issues”.

“We acknowledge that this at times leads to discussions about ideas and concepts that are not acceptable to everyone. The boycott, divestment and sanctions policy is not a university-endorsed policy.”

NSW Jewish Board of Deputies CEO Vic Alhadeff said the “obsessive focus” on BDS by the Department of Peace and Conflict Studies ignores the reality that it does “absolutely nothing to advance a resolution of the conflict and that BDS is little more than a fringe issue for extremists”.

B’nai B’rith Anti-Defamation Commission chair Dvir Abramovich said it is “shameful” that the good name of the university has been “hijacked and lent to this blatantly anti-Israel hate-fest, affording the conference a degree of legitimacy and credibility that is unwarranted”.

“Misusing tax dollars to officially sponsor and put out the welcome mat to a one-sided propaganda gathering … which violates the principles of free speech and the unrestrained exchange of ideas so fundamental to university life, is shocking,” he said.