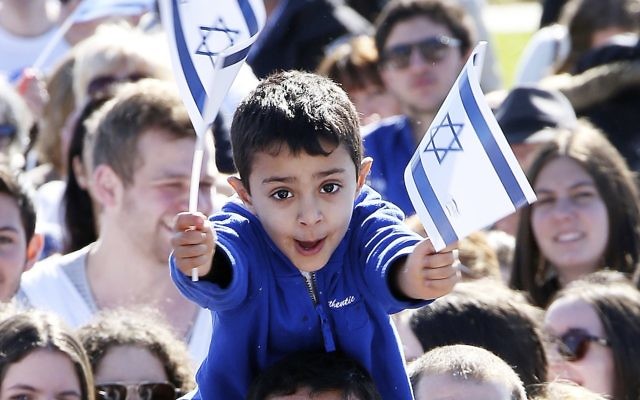 A 10,000-strong sea of people dressed in blue and white turned out to show their support for Israel at Dudley Page Reserve in Dover Heights on Sunday.

Calling for peace and security for both the citizens of Israel and residents of Gaza, they carried Israeli and Australian flags, placards, and blue and white balloons.

NSW Jewish Board of Deputies president Yair Miller told The AJN that it was “gratifying for the community leadership” to see the community respond in such numbers.

“When the community does respond in such an unprecedented manner it certainly does make us proud.”

Addressing the gathering, Miller said, “We stand here today, unified as a community, as Jews, as members of Parliament, as members of other faiths and national groups to show our support for the people of Israel and their struggle against terror and war.”

Executive Council of Australian Jewry president Robert Goot deplored the loss of life and injury sustained by innocent civilians in both Gaza and Israel.

“But we know that Hamas’s cynicism – in locating its armaments in, and operating out of, homes and mosques using human shields – knows no bounds,” he said.

He added: “And what about the mainstream media in Australia, who have failed to guard against biased, distorted, inaccurate and simply erroneous coverage and commentary … if we control the media as is sometimes hatefully alleged, we’re not doing it at all well.”

Zionist Council of NSW (ZCNSW) president Richard Balkin asked everyone present to “make the case for Israel at every opportunity to your family and your friends, to your work colleagues and on social media, as often as you can”.

“Please continue to remind the world that Israel values every civilian life and that it is Hamas who is responsible for the horrific scenes with which we are confronted relentlessly,” he said.

“Israel did not start this war and that all Israel wants – and has ever wanted – is to live in peace with its neighbours.”

Labor’s message of support reaffirmed Israel’s right to exist within secure borders and to defend its citizens, while abhorring the worldwide increase in anti-Semitism that has erupted during the recent conflict.

Parliamentary Secretary to the Prime Minister Josh Frydenberg also sent a message of support, endorsing Israel’s right to defend itself and condemning Hamas for being “no partner for peace”.

The official proceedings wrapped up with a moving rendition of Israel’s national anthem, Hatikvah.