The overturning of Roe v Wade in America has sparked a global conversation about respective nations’ abortion laws and women’s rights more broadly.

Women have taken to the streets, with protests happening in Melbourne, Sydney and many more major cities around the globe.

The protesters have been standing up for their human rights as well as demonstrating in solidarity for the women who have lost theirs.

This poses the question, are our laws in Australia good enough, if yes, good enough for whom? And if not, what do we do?

Religion joined the conversation when the bible was used for justification and reasoning for the laws passed in America, so what is the Jewish community’s role in this issue, and is it time we talk about it?

The right to religious freedom has also been called into question in America due to the trigger laws that have been passed since the abolishment of Roe v Wade.

Some religious Jews in America have said that these newly introduced prohibitions on abortion violate their religious beliefs.

The Women’s Rabbinic Network in the US said in a shared statement to their website, that “Forcing someone to carry a pregnancy that they do not want or that endangers their life is a violation of Jewish law because it prioritises a foetus over the living adult who is pregnant.

“This must be understood as a violation of the United States Constitution which guarantees our freedom to practise our religion and also our freedom from the dictates of other religions.” 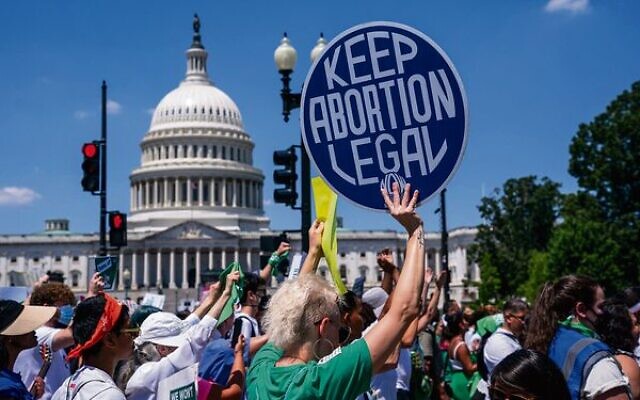 “The overturning of Roe v Wade is the result of a drive by American Christian groups to ensure that secular American law mirrors their religious Christian ideals. This is not a Jewish value. Judaism does not require secular law to mirror halachah,” she said.

“JOFA Australia stands by the halachic opinion that the welfare of the mother is paramount and should always be at the forefront of any decisions relating to abortion.

“Each individual situation must be carefully considered and the welfare of the mother is paramount.”

The situation in America has caused global outrage, but it may be the catalyst for a conversation we need to be having on our own shores about whether or not Australian women are safe from a similar fate, and whether or not our current situation is good enough.

Abortion is currently legal in all states and territories but the particulars vary by jurisdiction.

In the ACT, abortion is legal up to 16 weeks’ gestation. After 16 weeks, the patient cannot get an abortion in the ACT and would have to travel interstate.

In New South Wales and Queensland, abortions can be performed at up to 22 weeks. After that, two doctors must approve the procedure. In Victoria and the Northern Territory, it is 24 weeks.

South Australia was the last state to decriminalise abortion, when the procedure was removed from the state’s criminal code early last year. There, abortions are allowed until 22 weeks and six days, after which two doctors have to agree it is necessary.

In Australia it is estimated that half of all pregnancies are unplanned and half of those are terminated. It is also estimated that between around one quarter and one third of Australian women will have an abortion in their lifetime.

One such woman is Ava (name has been changed for anonymity), who had a surgical abortion in Melbourne.

Ava was raised in the United States with her 12 siblings, in a very religious Orthodox Jewish family.

“Abortion wasn’t even a discussion when I was growing up,” she told The AJN.

She got married at a young age, and had four children with her husband who she later divorced. After her divorce she said she was in “a bit of a religious slump … so I was sexually active at the time.”

When she was living in Melbourne with her children she entered what she described as a “vague” relationship with someone, but discovered that he had a drug problem, and she knew then, that “this was not a safe person.”

Her intuition was correct, as this abusive ex-partner eventually raped her, and from that point she cut off contact with him entirely.

Ava explained that she wasn’t looking for any signs of pregnancy, “I was following, you know, general, safe-sex recommendations,” she said. “I was on birth control at the time [of the rape].”

When Ava went to a scheduled doctor’s appointment to switch her contraception prescription they discovered that she was pregnant.

“I thought it was a recent pregnancy from some other encounter I may have had,” she said.

After blood tests and ultrasounds, the doctors informed her that she was 11 weeks and four days pregnant.

“I went through the first trimester of pregnancy and I had no idea,” she said.

“Luckily, thank God, I found out the date of conception.”

Ava counted backwards and realised that she was pregnant by the man who had raped her, “someone who was very dangerous, who imposed a very serious risk to my life and the life of my four children.”

Posed with the question of what to do, she said, “There was no doubt in my mind, I wasn’t going to be having this baby.”

In Australia some abortions can be fully covered by Medicare through the public health care system. However, terminations through the public system are not available in all parts of the country so many patients, regardless of their income, still have to pay hundreds or thousands of dollars to have an abortion with a private provider.

In South Australia and the Northern Territory, abortion provisions are in the public health care system, and in Victoria and Tasmania financially insecure people may be able to access an abortion at no cost.

However, even in the public system, people who do not have access to Medicare, for example temporary visa holders, may be forced to pay out of pocket in these states and territories.

Most private abortion clinics charge approximately $290 upfront for a medical abortion, not including the cost of the actual drugs which in most cases must be paid for on top of the basic abortion fee and cost less than $40.

A first trimester or “early” surgical abortion will cost about $500 upfront.

For abortions required after the first trimester, the cost increases exponentially.

“I can’t imagine what I would have done in that situation if I wouldn’t have had access [to an abortion],” she said, adding, “I was so lucky.”

Despite being able to afford the procedure without assistance, she said that the emotional toil of enduring it alone made her feel “a real sense of sadness”.

“There wasn’t anyone to talk to,” she said. “Who was I going to go and speak to and talk to about this situation?”

After a surgical abortion, which is performed under a light general anaesthetic, the patient needs to be driven home by a friend, family member or driver, however Ava explained that she was “too embarrassed” to ask someone and therefore explain the situation.

“Obviously you don’t really go and tell anybody about it, and there’s not really anyone to turn to,” she said.

Eventually Ava told a few of her closest friends who she said were “immensely supportive”, adding, “I lucked out.”

Her friends were the first people she told, not consulting anyone before she went through with the procedure.

In the Orthodox community, it is common practice to ask a rabbi for assistance when making big decisions, however Ava said she didn’t consider going to a rabbi for guidance, “not even for a second”.

“I wasn’t ready to listen,” she said.

“You are not meant to consult a rabbi or ask them a question if you’re not going to listen to what they say, and I knew with complete certainty when I discovered who the father was that I was not going to be having that baby.” 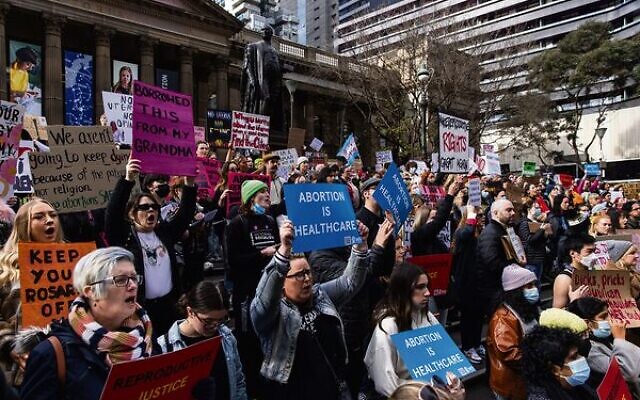 Demonstrators hold placards and signs during a rally in support of abortion rights at the State Library of Victoria in Melbourne, on July 2. Photo: AAP Image/Diego Fedele.

She said that making the decision “to not bring this life into the world under those conditions”, felt “quite spiritual”.

Halachah dictates that if the mother’s life is at risk an abortion can be performed, which Ava interprets to include both physical and mental endangerment.

Like many other women she had to ask herself if she would be able to sustain her wellbeing if she followed through with the pregnancy. In her case, the answer was no.

The decision to go through with the procedure alone is not uncommon for women, who have been having underground abortions for centuries.

“I’m not convinced that there would have been shame from community members … I think honestly, most of the shame was from myself,” she said.

Lisa Ezekiel, CEO of National Council of Jewish Women of Australia (NCJWA) Victoria, echoed these sentiments, saying, “Talking about abortion should not be controversial or taboo – it is a needed, medical procedure and most importantly, a fundamental human right.

“When abortion isn’t talked about, we not only lose the chance to break down the stigma surrounding abortion, we miss opportunities to discuss the human rights issues impacted by abortion laws and policies.”

The current abortion laws in Australia are stricter than they were in many US states where it has now been criminalised, and Ava fears, “We don’t know what is coming.”

Ava said, “That is why the conversation needs to be started in our shules, and when we’re pushing the kids in the park. How are we going to actually support each other?

For Ava, this was something she had to experience alone, with many women in both religious and non-religious communities feeling that they need to do the same.

How do we break the stigma and when do we start talking? Now or never?

The Jewish community has a role to play in this, as it is an issue that affects our women, our Avas.

Ava said, “Whatever it takes to protect our women and our children, we will do.”