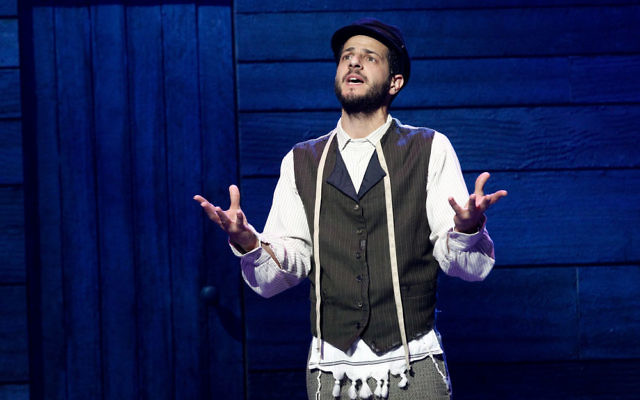 Lior in Fiddler on the Roof. Photo: Jeff Busby

IT’S a dramatic change of role for Israeli-born Melbourne singer Lior, who is making his musical theatre debut in a new production of the classic musical Fiddler on the Roof, which premiered last week at the Princess Theatre in Melbourne.

Lior plays Motel the tailor in a cast led by Anthony Warlow as Tevye, seasoned actress Sigrid Thornton as his wife Golde, funnyman Mark Mitchell as Lazar Wolf and Nicki Wendt as Yente the matchmaker.

So how did the singer, who was born in Israel and moved to Sydney with his family when he was 10 and has now settled in Melbourne with his wife Melanie and their daughter Lucca, 11, and son Jem, 8, find himself in Fiddler on the Roof?

“The producers approached me to join the cast,” he tells The AJN. “They said that it may sound a bit left of centre, but would I like to come in and try out for the role of Motel.

“I accepted and went back and watched the movie again. It reinforced how beautiful the production is and that it is such a universal and timeless story.

“Fiddler on the Roof has plenty of catchy numbers but also has a real depth – a bittersweet story that is so reflective of Jewish culture.”

Asked if he has been taking any acting lessons, Lior says director Roger Hodgman lets the actors find their own way during rehearsals and this leads to a truthfulness in the delivery of the script.

“He guided me and let me discover things on my own, but just watching Anthony Warlow and Sigrid Thornton is a lesson in itself!”

Lior says that playing an acting role in a musical is different to singing on stage during a concert.

“When I’m performing at a concert I’m being myself as I play my  songs to people who connect to my music,” he says.

“This is exciting for me – I can’t remember the last time I was thrown into the deep end and challenged in this way.”

Lior also has a personal connection to the story of Fiddler on the Roof, which is set in a shtetl in Czarist Russia in 1905 and revolves around Tevye and his attempts to preserve his family’s traditions in a changing world.

“My mum’s side of the family is from that part of the world,” says Lior. “I was very close with her parents and so much of the musical reminds me of them; there is a strong connection and I feel right at home in this show.”

During the Sydney season of Fiddler on the Roof, which opens on March 24 at the Capitol Theatre, Lior will have to miss a few performances to honour a long-standing concert commitment.

“I will be going to the United States in April to perform at the American premiere of Compassion, the collaboration I did with Nigel Westlake based on a collection of ancient Hebrew and Arabic texts.”

Fiddler on the Roof is at the Princess Theatre until February 27 and opens in Sydney at the Capitol Theatre on March 24. Bookings: www.ticketmaster.com.au.