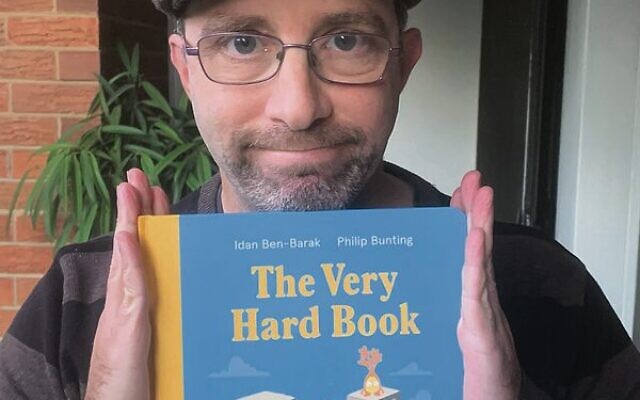 Idan Ben-Barak with his latest book.

With a degree in microbiology and the history and philosophy of science, a diploma in library studies, and a day job that has very little to do with any of the above, writing books – let alone children’s books – wasn’t something Idan Ben-Barak ever thought he would do. But the universe had other plans.

The wonderful thing about Ben-Barak’s books though is that they incorporate his love of science.

“I had no clue whatsoever that I’d end up doing this,” he told The AJN.

“I enjoyed making up occasional funny little bits for school papers and whatnot, but it was very clear to me that real writing was done by special people who could make up 70,000-word-length narratives out of thin air. Then, aged 30, I stumbled into a writing workshop and serious-sounding people started telling me to hand things in. I’m very obedient, so I handed the things in. It’s been like that ever since.”

While his first two books were for adults, a publisher changed Ben-Barak’s tune, with a request for a children’s book about microbes, called Do Not Lick This Book.

The author acknowledges that he has a particular affinity for writing for kids.

“I think it’s the limitations of the medium. You have a limited number of pages and a limited vocabulary to get the reader engaged, and child readers do not tolerate boredom, vagueness or waffling. They will just leave,” he said. “And very importantly, being very silly is still allowed in children’s books.”

Ben-Barak still has a day job so, as he explained, writing is confined to whatever time he can find. But he says it’s not a formal process.

“I scribble what I can, then I get up and go look in the fridge, and when I come back I look at what I’ve written and it’s still rubbish – only somehow even worse than it was two minutes ago – and I sit down again and write another sentence, and delete it, and the one before it for good measure!” he said.

“Being paid or unpaid, published or unpublished has nothing to do with it,” he said.

“If you have a goal in mind, such as being a published author, winning an award, or making writing your full-time occupation, I’d advise you to leave that aside for a while and concentrate on finishing a draft of that idea that’s been nagging at you for a while now.”