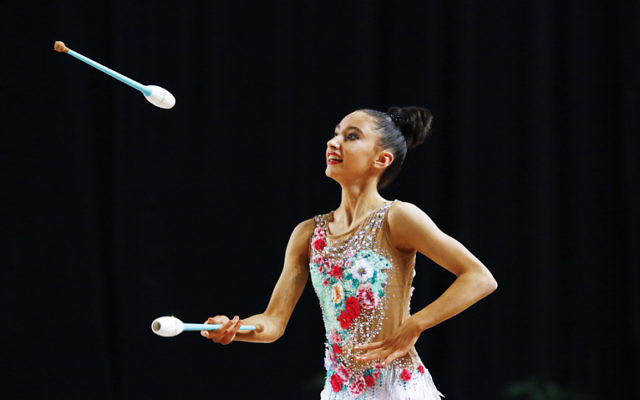 Rhythmic gymnast Alexandra Kiroi, 16, and race walker Jemima Montag, 19, have earned the chance to qualify for spots in the Australian team for the 2018 Commonwealth Games, to be held in the Gold Coast in April.

Encouraged by being long-listed for the squad in November, The King David School student and 2016 Maccabi Australia Jewish Junior Sportswoman of the Year travelled to Europe for an intensive training camp to perfect four new routines and to compete in the Stelle di Natale international tournament in Turin, winning a silver and three bronze medals and coming third overall.

Then, despite catching a cold two days before the Luxembourg Cup, Kiroi recovered and executed her routines flawlessly to win three individual apparatus gold medals and the overall individual trophy at senior category A level.

Kiroi, who trains more than 25 hours per week at Prahran Gymnastics Centre, said she was thrilled to do so well in Luxembourg at “an amazing FIG (Federation Internationale de Gymnastique) competition with all European countries taking part”.

She also thanked her coaches Kateryna Logachova and Valeria Vatkina for their support, particularly when she “was running a high fever two days prior and I got everyone scared”.

“Being trained by them is a privilege and I am very grateful for their hard work – Kateryna has been with me since I was a baby.

“But this certainly would not be possible without the support of my school and my teachers,” the young gymnast said.

Kiroi will spend the rest of the summer school holidays ramping up her training to prepare for the Australian Cup to be held in the Gold Coast from February 19 – a final gymnastics selection event for the Commonwealth Games that begin there in April, and also for the Pacific Rim Games.

She is one of five Australian rhythmic gymnasts competing for three remaining spots in the Australian team.

Montag – who was a flag bearer for the Australian team at the 2017 Maccabiah Games – beat the qualifying time of 96 minutes for the 20km women’s race walk at a meet at Fawkner Park in South Yarra on December 17, coming fourth with a personal best time of 1 hour, 34 minutes and 18 seconds.