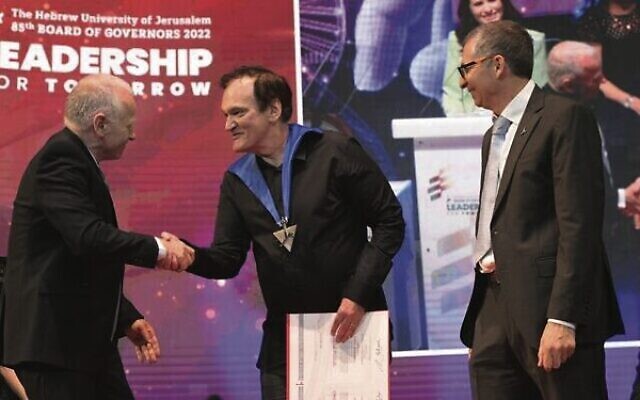 The actor, director, screenwriter and author received an honorary doctorate from the Hebrew University (HU) of Jerusalem last week. The university said it was recognising the Academy Award winner for his “critically acclaimed cinematic success as a writer, director, and actor”.

Tarantino, who in 2018 married Israeli singer and model Daniella Pick, splits his time between Tel Aviv and Hollywood. The university noted Tarantino’s “strong ties to Israel through his wife Daniella, and for making Israel his second home”.

Tarantino’s films are known for their signature dark humour. They have garnered global recognition, including seven Academy Awards. His films Pulp Fiction and Django Unchained won him Oscars for best original screenplay.

Tarantino has expressed admiration for Israeli directors Menachem Golan and Yoram Globus, who he said Hollywood snubbed “in an antisemitic way” in the 1980s.