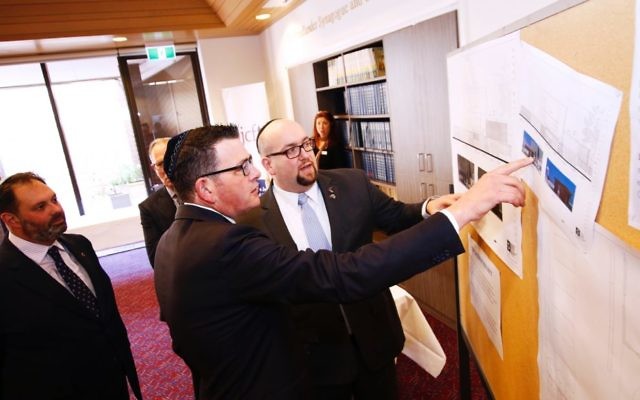 AFTER announcing a $200,000 grant towards a landmark security overhaul at Temple Beth Israel (TBI) in St Kilda, Premier Daniel Andrews said he sees his government as “a partner in this very significant security upgrade”.

The funding, through the Victorian Office of Multicultural Affairs, will go towards the significant security strategy, which Rabbi Gersh Lazarow, TBI senior rabbi, told the Premier was “funds we’d rather spend in other ways” but security and safety was paramount.

Andrews, with Labor MP for Southern Metropolitan Region Philip Dalidakis and Jewish Community Council of Victoria president Jennifer Huppert, were given a comprehensive tour by Rabbi Lazarow and TBI president Robert Hershan, during which the rabbi detailed TBI’s rapid expansion as a community hub.

Speaking to The AJN afterwards, Andrews reflected: “The security of Temple Beth Israel and the many thousands of members of the Jewish community who move through this precinct is very important to us.

“I want to congratulate the rabbi and all of his colleagues … who have advocated very successfully for us to be a partner in this significant security upgrade.

“It will be a really important boost for thousands of people who move through this particular facility.

“We know there are challenges and threats and the security at community facilities, whether they be religious, educational or cultural, has always been a priority for me and my team. We’ve made investments at a number of different sites.

“It’s a very popular place, a very busy place. We know there are challenges both here and indeed overseas, and we need to respond to those appropriately,” he added.

The Premier said the government’s contribution “is not a cost but an investment in a safer Victoria and one that I’m sure will be welcomed by the Jewish community”.

Rabbi Lazarow told The AJN TBI’s growing stature was all the more reason to integrate state-of-the-art security measures into its infrastructure in the present climate of threats to Jewish facilities worldwide, and the total project, on completion, will cost around $900,000, with a significant component coming from congregants’ contributions.

“We’ve been working on a grant application to ensure that we both secure the facility and also can make it a bit more welcoming and accessible, and we put some work over the past 18 months into a significant grant from the Multicultural Community Infrastructure Fund,” he said. “It’s really reassuring that these applications get heard and read.”