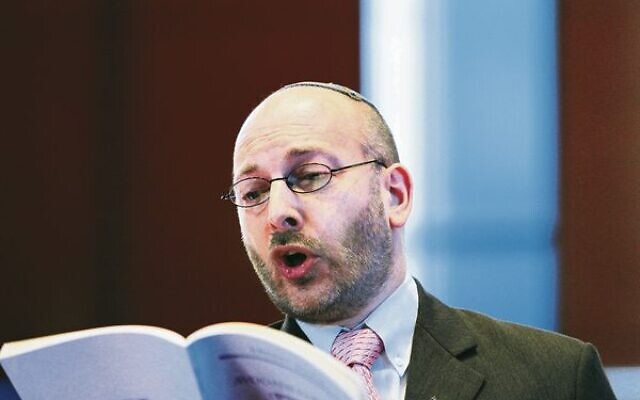 TBI Cantor Michel Laloum has been gagged from commenting on unspecified allegations against him. Photo: Peter Haskin

A BOMBSHELL email to Temple Beth Israel (TBI) members from two longstanding emeritus rabbis and their partners, and seven past presidents, has expressed great alarm at the direction the shule is taking.

As the synagogue’s long-running turmoil made national headlines in the mainstream media this week, the board faced renewed pressure for fresh elections well ahead of the AGM late this year.

But TBI’s board dug in this week, berating its critics, and claiming that “multiple representatives of the Chaverim faction are proactively seeking to cast our community in a negative light by contacting the mainstream press”.

Earlier, the board reacted strongly to the Chaverim email, sending its own letter to members in which it criticised the use of the member database and threatened “necessary action if it is found that personal data has been accessed inappropriately”.

Trouble for Melbourne’s flagship Progressive synagogue began when development policies by the board and Rabbi Gersh Lazarow, then senior rabbi, caused deep divisions. Later accused of widespread and long-running plagiarism in his sermons and articles, the rabbi eventually parted ways with TBI. Rabbi Kim Ettlinger left and is now at Perth’s Temple David.

The board this year publicly announced that unspecified allegations against cantor Michel Laloum have been handed to its lawyers, but delayed informing him of details, and gagged him from commenting.

Laloum has since launched legal action at the Fair Work Commission about bullying he was allegedly subjected to at TBI.

Hundreds of memberships have not been renewed and the board has received some 120 resignation letters this year. The AJN understands membership declined from 1200 to 800 in the past five years. Donations have dwindled, with many stating they do not want their membership fees and donations to be used for TBI’s spiralling legal costs.

The AJN received reports about executive members canvassing individuals on whether they were harassed by Laloum, despite TBI president Joanne Loewy-Irons stating on May 6 the investigation into the cantor was “independent”.

The Chaverim letter said Loewy-Irons ignored Laloum’s entitlement to “a presumption of innocence … the board did not follow normal workplace processes”.

Describing it as “the saddest period in Temple Beth Israel’s history”, the letter accused the board of “unfortunate and inappropriate decisions … they have polarised our community … the legacy left to us by 93 years of communal life has been shattered.

“There has been a culture of secrecy under the guise of confidentiality … We can no longer remain quiet as we watch the situation go from bad to worse.”

Interim Rabbi Gary Robuck “is leading our services and pastoral care in an outstanding manner, for which we are very grateful, but he needs a cantor”.

The letter charged that “when congregants have sent in legitimate questions to the board … they either receive no response at all, or offensive, disrespectful replies”.

The TBI board stated that guiding the shule through the pandemic, appointing an executive director, appointing an interim rabbi and setting up the search for a permanent rabbi, as well as reducing membership fees by 15 per cent, are among its recent successes.

“But it is also true that these and other gains have been made in the face of a concerted and increasingly sophisticated effort to sow disunity from within,” the board stated to members.

“You have our assurance that the board will always do what it can to ensure the flames of discord are not fanned beyond our gates,” it said of the mainstream media reports.

“We instead stay focused on the internal task of promoting unity and good governance at TBI.”