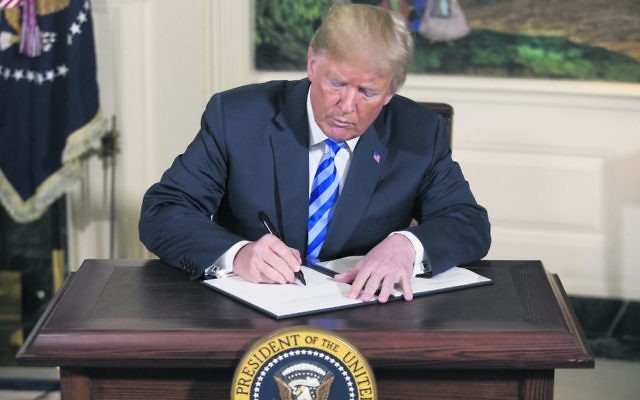 ISRAELI leaders have hailed Donald Trump’s decision to pull out of the Iranian nuclear deal as “historic”, and claimed he has made the Jewish State safer.

On Tuesday night, the US President lambasted the “decaying and rotten” agreement, saying that it would have put Iran “on the cusp of acquiring the world’s most dangerous weapons”.

After months of hints, he pulled America out of the deal, and promised the resumption of “powerful sanctions” against Tehran.

Just minutes after the speech, things seemed to be heating up on Israel’s northern border, beyond which Iranians are becoming more and more entrenched on Syrian soil.

Syrian media reported an airstrike on an area associated with Iranian military, and said it was the work of Israel. Jerusalem didn’t comment.

Some other world leaders, by contrast, were dismayed. The leaders of France, Britain and the UK released a statement voicing “regret and concern”. They plan to try to maintain the nuclear deal, but it’s unclear whether this will happen.

Iranian President Hassan Rouhani said he wants to talk to countries that signed the agreement alongside the US, to see if they can guarantee that Tehran still gets what it wants from the deal.

He threatened that if this doesn’t happen, he will speed up enrichment of uranium within “weeks”.
Israel is desperate to convince these countries not to make further concessions to Tehran in a bid to keep the deal alive.

Danny Danon, Israeli ambassador to the UN, has been speaking to fellow ambassadors, telling them that Trump’s announcement begins a “new era of security and stability in the Middle East”.

Danon said: “A united front against a dangerous regime spreading terror and instability will stop the Iranian aggression threatening the free world.”

Despite Jerusalem’s confidence that Trump’s decision will maintain peace in the long run, in the short term it is readying for instability.

An IDF spokeswoman told The AJN moments before the President’s speech that it had identified “irregular activity of Iranian forces in Syria”, so it decided to change advice for civilians in the Golan Heights and tell local authorities there to unlock bomb shelters. It has also set up Iron Dome missile defence systems.

Israeli ministers were sure to send stark warnings to Tehran – and its allies in Syria – ahead of the announcement. Defence Minister Avigdor Lieberman said that if Iran attacks Israel, “we will strike Tehran”.

Energy Minister Yuval Steinitz said that if the Syrian President allows his territory to be used as a base for attacks on Israel, “he should know that would be the end of him, the end of his regime.”

Many opposition politicians were on the same page as the government. Yair Lapid, of the Yesh Atid party, said that Trump made a “steadfast stand alongside Israel”.

Dissenting views have mostly been voiced quietly by security officials, who tend to be more optimistic than politicians about diplomacy with Iran.

Some former security officials have openly questioned the value of leaving the deal, such as former Mossad director Tamir Pardo, who said on Tuesday that be believes Iran has complied with the deal, and a new deal is likely.

The Israeli Prime Minister fought Trump’s predecessor Barack Obama tooth and nail for helping to negotiate the nuclear deal, yet now the White House agrees with him.

During Trump’s speech he even mentioned the haul of Iranian intelligence documents that Netanyahu revealed last week, saying it proved Iran’s “history of pursuing nuclear weapons”.

Straight after Trump’s speech, Netanyahu pointed out that Israel opposed the agreement from the start, and said, “The deal didn’t push war further away, it actually brought it closer. The deal didn’t reduce Iran’s aggression, it dramatically increased it, and we see this across the entire Middle East.

“Since the deal, we’ve seen Iran’s aggression grow every day: in Iraq, in Lebanon, in Yemen, in Gaza, and most of all, in Syria, where Iran is trying to establish military bases from which to attack Israel.”

Reflecting on tensions across the border, Netanyahu said, “We are determined to prevent the Iranian army from creating a base against us in Syria, and we will react powerfully to any strike on our territory. The army is ready, the army is strong and whoever tries us will feel our force.”

He praised Trump’s “historic move”, and his commitment “to ensure that Iran never gets nuclear weapons, not today, not in a decade, not ever”.

Analysts say that Netanyahu has got what he wanted, but it’s unclear how things will play out now and whether or not the Israeli PM has a clear idea.

“The question is what’s next, and I really don’t know Netanyahu’s vision for the next step,” Menahem Merhavy, an Iran expert at Hebrew University, told The AJN.

Trump’s move is “not necessarily going to hurt Iran as much as a withdrawal from all sides would”, Merhavy predicted.

But he said that even with other Western powers remaining in the deal, Trump’s move will hurt Iran economically and strengthen extreme elements there.

It will make Iran more hawkish, but “this is not something that would make Iran start a war tomorrow.” Merhavy commented: “If there’s anything Iran cannot afford at the moment it’s a big military campaign.”

While nobody has clear answers about what Trump’s move will mean for Israel, the country’s leading security think tank, the Institute for National Security Studies (INSS), has just released the results from a simulation it ran to work out what may happen.

“Israel found itself in a situation where the agreement was breached; Iran resumed work on its nuclear program and continued its ballistic missile program,” reported INSS researchers Ari Heistein and Ezra Friedman.

By the end of the simulation “it was very doubtful that the current American administration was prepared to take serious action against Iran, beyond leaving the agreement”.