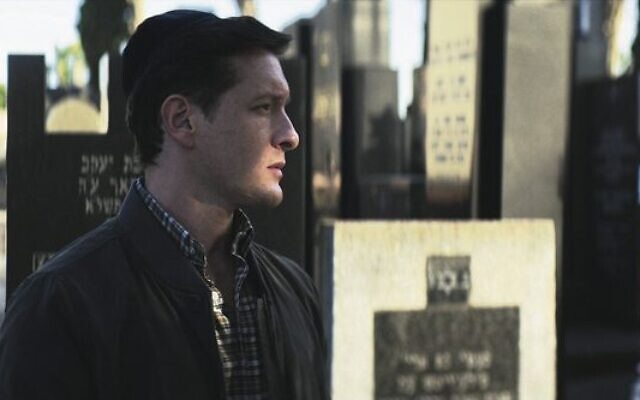 Yosi, the Regretful Spy tells the story of an Argentine intelligence officer's undercover mission into the Jewish community of Buenos Aires and the conspiracy he uncovers. Photo: Amazon Prime Video

More than three decades after overseeing the conversion to Judaism of a charming young Argentine man with a Jewish wife, Rabbi Mauricio Balter learned that his former student was not what he had seemed to be.

The student was also a spy.

Jose Perez, who changed his first name to Yosi when he converted in 1988, was sent undercover by the government to confirm an antisemitic conspiracy theory about Argentine Jews. He would eventually come to believe that his reconnaissance helped facilitate the bombings that killed more than 100 Jews in Buenos Aires in the 1990s.

Now a book on the story, Yosi, the Regretful Spy, has been turned into an Amazon TV series of the same name – and it’s a source of shock for his former rabbi.

“He was really a very good candidate to be a Jew,” Rabbi Balter said. “He was open with me. Now I understand that he was a good actor also.”

The first season of Yosi, the Regretful Spy explores deep-seated antisemitism in the Argentine military and police establishment, leading up to the 1992 bombing of the Israeli embassy in Buenos Aires. A second season that is under production now will extend the timeline to 1994, when the bombing of the AMIA Jewish community centre claimed the lives of more than 80 Jews.

The show takes place in the democratic era following Argentina’s brutal military dictatorship – during which political dissidents and innocents, including a disproportionate number of Jewish victims – were tortured or disappeared by the government.

It’s easy to see why Yosi’s story makes for compelling TV: the facts are straight out of Hollywood thrillers.

Initially hired to investigate the Andinia Plan, an antisemitic conspiracy theory that claimed Jews and Zionists were plotting to colonise the Patagonia region of Argentina and Chile as a “Jewish state in the southern hemisphere”, Yosi soon finds himself befriending members of the Jewish community in Buenos Aires and becoming a confidant of a prominent Israeli-Argentine businessman and arms dealer.

The show depicts Yosi climbing the social ranks of Buenos Aires’ Jewish community, going into business with some members and falling in love with another. It also shows him reporting back to intelligence and police brass, who constantly spout antisemitic vitriol, in a juxtaposition that is meant to demonstrate both the absurdity and the persistence of the Andinia Plan.

Yosi’s espionage lasted for nearly 15 years, until he began to feel compunction about his involvement in the mission and began distancing himself from his handlers.

Yosi stands in the rubble of the Israeli embassy in Buenos Aires. Photo: Amazon Prime Video

In 2000, Perez told journalists Miriam Lewin and Horacio Lutzky, the authors of Yosi, the Regretful Spy, that he was certain the information he had gathered, including building plans and blueprints, had been used in the 1992 and 1994 bombings of the Israeli embassy and the AMIA building, still the deadliest terror attack on Argentinian soil.

The show contains many details that are true to history, but also takes some creative liberties, portraying Yosi as becoming involved in a complicated web of international arms dealing, which was not part of the real story. Another difference: the real Jose Perez took on many more lovers than the two that are revealed in the show – even marrying a Jewish woman in secret.

When Perez stopped cooperating fully with his superiors, he was transferred to a bureaucratic department within the police, relocated to the centre of the country, and separated from his wife. For fear of assassination, Perez pre-emptively recorded his testimony, and took on a new identity in witness protection.

Daniel Burman, the showrunner and co-director of Yosi, said the show was necessary to demonstrate how a conspiracy theory about Jews drove policy in Argentina for many years, and the fallout continues to resonate today.

“The Jewish community was very vulnerable, we still are. It’s very important to understand the climate of the time, the restoration of democracy in a society held back by fear, by powers that continue to operate from the shadows,” Burman added. “In fact, there exists a conspiracy that has not been completely disarmed, a network that is sustained through lies, corruption, and impunity.”

Alongside the fear and trauma that characterised Jewish life for Argentine Jews in the post-dictatorship era, Yosi captures the social fabric of local Jewish life. We see young women performing Israeli folk dances; the Jewish choir singing Hatikvah at the Israeli embassy on Yom Ha’atzmaut; young political activists sharing latkes as they discuss their frustrations with Israeli politics; and Shabbat dinners with the elderly, led by a local rabbi.

Rabbi Balter said he was blindsided by the revelation that Yosi had converted while spying on his community, explaining that he has tried to think back to whether there were any red flags that could have suggested Yosi’s true motivations. But there weren’t any.

Shooting for the second season, which takes place in 1994, has already begun, and will deal with Yosi’s quest for redemption.

In episode five of the first season, there is a hint of that quest. In one particularly poignant scene, Yosi and his Jewish girlfriend’s father, the fictitious arms dealer Saul Menajem, are sitting in Menajem’s private plane. Yosi feels comfortable enough to ask, upfront, about the Andinia Plan.

“I thought you knew about politics,” Menajem says. “It’s antisemitic superstition. Very romantic, by the way. In vogue among the services these days.”

Yosi appears to experience a moment of confusion, and then clarity, as he accepts that he has been sent on a fool’s errand – and that he is the fool.

“But do the intelligence services eat that rotten fish?” he asks.

“Talking about Argentine intelligence is a contradiction,” Menajem says. “They manipulate their people with stories. They need believers and an enemy. We Jews are the most obvious.”