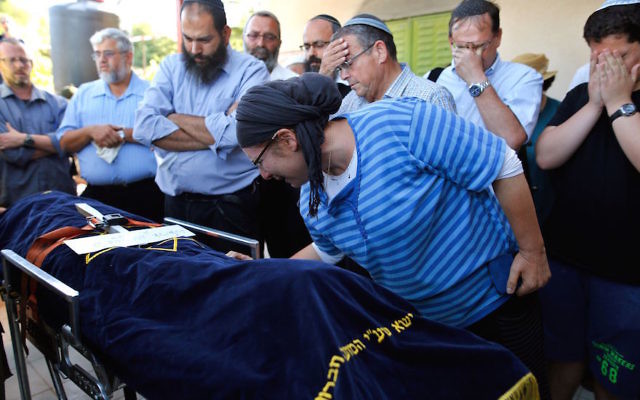 Rina Ariel mourns daughter Hallel, who was fatally stabbed in a terror attack in their home

The family of the latest terror victim sat Shiva this week, as the mother of the terrorist, a boy just four years older than his victim, lauded him as a hero.

Hallel Yaffa Ariel, 13, was asleep in her bed in the settlement of Kiryat Arba last Thursday, June 30, when a 17-year-old Palestinian boy from a nearby village broke in and stabbed her repeatedly.

Just one day later (Friday July 1), Rabbi Michael Mark, a 48-year-old rabbi and father of ten, was driving on a West Bank road when terrorist bullets overturned his car, killing him and wounding his wife and two teenage children.

Then on Tuesday July 5, a Palestinian woman tried to stab a soldier at a West Bank bus stop; she only halted when another soldier fired at her.

“My son is a hero,” the mother of Ariel’s 17-year-old attacker told a Palestinian news network. “He made me proud.”

After stabbing Ariel, Muhammad Nasser Tarayrah attacked a guard who entered the house and tried to stop him, but then other guards arrived and fatally shot him. “My son died as a martyr defending Jerusalem and the Al-Aqsa Mosque,” claimed Tarayrah’s mother.

“Praise be to Allah, Lord of the Worlds, he [my son] has joined the Martyrs before him, and he is not better than them. Allah willing, all of them will follow this path, all the youth of Palestine. Allah be praised.”

In contrast to Tarayrah’s “proud” mother, the terror victim’s mother was in tears after learning of her daughter’s death. Rina Ariel said that her daughter was just like any other teenager, enjoying the start of the summer by sleeping in late, “tranquil and calm, and a terrorist came and murdered her in her bed”.

On Sunday, Edrei told The AJN in detail about the gruesome task that faced him at the Ariel family home. A member of the ZAKA organisation, which cleans up terror scenes and deals with bodies, he lives close to the Ariels and knows the family. He was determined to try to minimise the trauma to the parent of the ­victim when they arrived on the scene.

He wrapped and removed the terrorist’s body from their daughter’s bedroom. “I knew I had to do it because if the ­family comes and he’s still here it’s even more terrible,” Edrei said, adding that knowing the family made it tough for him to enter the scene.

“I talked to God and said ‘please give me the power to go inside and do this task’.”

Israel’s President Reuven Rivlin visited the Ariel Shiva on Sunday. “From just one look at the pictures of her beaming face, one can understand what a beautiful soul has been lost,” he said.

The victim’s mother, Rina, told Rivlin that “my daughter was a ray of light, a girl made entirely of light. I know that before you are a President, you are a father and a grandfather. The pain is so great, we have lost our ray of light.”

Rivlin also gave a eulogy for Rabbi Mark – a yeshivah director who went by the nickname Miki – at his funeral. “I stand in front of your coffin, Miki, Michael, in sorrow and anguish, and with me stand an entire nation, together grieving,” he said. Rivlin noted that Rabbi Mark was on the way to celebrate his mother’s 80th birthday when the terrorist “robbed your family of you in cold blood”.

As the Ariel and Mark families mourned, two victims of a stabbing terror attack perpetrated in Netanya last Friday were recovering. Meanwhile, border police serving in Hebron breathed sigh of relief, after they successfully foiled a terror attack directed against them.