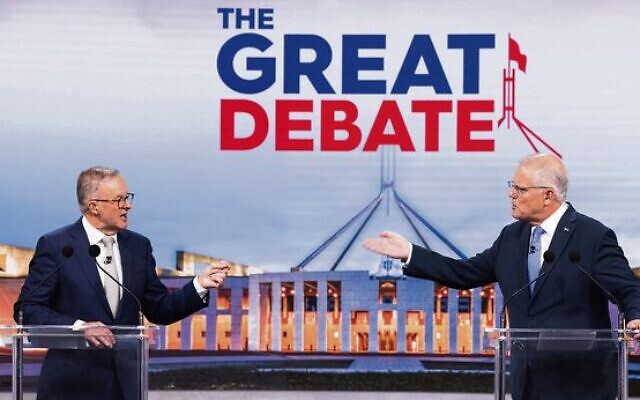 Would you consider extending security funding to recurring operational costs such as armed guards for non-school institutions and professionally operated community security groups?

Liberal: The Morrison government continues to stamp out crime and improve community safety through our highly successful Safer Communities Fund. Our government’s recent $50 million expansion to the fund in the 2022-23 budget has brought the total investment made through the fund up to $315 million.

Labor: A Labor government will consider changes to the Safer Communities Fund to address Jewish community concerns. We will consider whether the fund should be further expanded to pay for security at facilities other than schools and pre-schools, and for security infrastructure and personnel at the community level.

Allegra Spender (Independent, Wentworth): As well as advocating for the continuation of all funding for community security, I’ll advocate to broaden the scope so communities can use funds for priorities they identify, as the communities themselves are the best judges of their greatest needs.

Zoe Daniel (Independent, Goldstein): At-risk communities should not be penalised because of their vulnerable status and prohibitive costs of security comprise de-facto penalties. I therefore support additional funding.

Are you in favour of increasing, decreasing or maintaining at current levels Commonwealth education funding for private schools?

Liberal: The Morrison government is committed to fair and targeted per student funding and to reviewing the current Direct Measure of Income methodology to ensure it is fit for purpose and an accurate reflection of parent contributions to non-government schools. A re-elected Morrison government will bring this review forward to 2024 to ensure funding to the independent school sector is fair and representative.

Hodgins-May: The Greens believe that federal funding to the school education system should be on the basis of need and equity to ensure that all Australian children have the opportunity to fulfil their best educational outcomes.

Spender: I believe in maintaining current levels of funding for private schools. I will lobby for the full implementation of the Gonski Review to ensure secure, ongoing funding for all schools.

Daniel: School funding should be equitably distributed across the education sector; however, disadvantaged schools and special needs programs should be prioritised.

Do you support formally recognising a State of Palestine, other than as an outcome of a negotiated agreement between Israel and the Palestinians?

Liberal: The Morrison government does not recognise a State of Palestine. Palestinian statehood can only be realised through direct negotiations between Israel and the Palestinians.

Labor: Labor’s national platform makes clear the desire of the conference to recognise Palestine as a state while acknowledging this will ultimately be a matter for a future Labor government.

Hodgins-May: The Australian Greens support the recognition of a Palestinian state, alongside the state of Israel, and support the right of both to live in peace and security in their own state.

Australia now recognises that the capital of Israel is situated in West Jerusalem. Do you support the current position?

Liberal: Australia recognises West Jerusalem as the capital of Israel, being the seat of the Knesset and many of the institutions of government. The Morrison government further looks forward to moving the Australian embassy to West Jerusalem when practical, in support of and after final status determination.

Labor: Labor believes the status of Jerusalem should be resolved as part of any peace negotiations. Labor will not seek to play domestic politics with Australia’s foreign relations – our approach to the region will always be guided by our national interests and values.

Hodgins-May: Jerusalem is a final status issue that should be resolved between the Israelis and Palestinians. The Greens do not support the Morrison government’s decision to recognise West Jerusalem.

Spender: I support the Australian government’s decision to recognise West Jerusalem as the capital of Israel.

Daniel: I acknowledge that Jerusalem is central to the Jewish people. I do not oppose the moving of the embassy there should the Australian government of the day choose to do so.

What is your position on boycott, divestment and sanctions (BDS)?

Liberal: The Morrison government does not support the BDS campaign that actively targets Israel and Israelis, or Jews and Jewish institutions, especially when coercion or public pressure campaigns are weaponised to create the appearance of broad public support. The international community, including Australians, must move beyond ritual denunciations of Israel.

Labor: Labor believes that a resolution of the Israeli-Palestinian conflict will only come from open dialogue and discussion between the parties, not from a policy of exclusion. This underpins the Labor Party’s opposition to the boycott, divestment and sanctions campaign.

Hodgins-May: Boycotts, divestment and sanctions is not Australian Greens policy.

Spender: I have clearly and repeatedly stated my unequivocal opposition to BDS. It is destructive and denialist in its refusal to acknowledge the intrinsic rights of the Jewish people, including their right to national self-determination.

Daniel: I do not support BDS. I strongly support the right of the Jewish people to a safe and secure homeland in the State of Israel.

Australia has a proud record of supporting Israel at the United Nations. If elected to government, would your party maintain Australia’s current voting patterns in UN agencies?

Liberal: The Morrison government will stand by Israel in the face of biased and unfair targeting in the UN General Assembly and other UN bodies including the UN Human Rights Council (UNHRC). The anti-Israel bias and one-sided resolutions introduced each year in the UNHRC under permanent Item 7 of the council’s agenda do not contribute to lasting peace and stability for Israel or the Palestinians.

Labor: Labor is a strong supporter of the State of Israel – that will never change. UN bodies that are perceived to be biased or unbalanced are diminished in their credibility. It is important all countries and actors are held to account for violations of human rights. That’s why Labor questioned why Australia was the only country along with the Trump administration to vote against a UNHRC investigation into human rights violations in the Palestinian Territories – including violations committed by Hamas and other terrorist groups. In all of our engagement with the UN, we will be guided by our national interest, taking into account the facts on the ground and our support for a just and enduring peace.

Hodgins-May: The Australian Greens would judge each UN resolution on its merits, in line with the Greens’ commitments to social justice, peace and non-violence.

Spender: I support Australia’s current voting patterns in UN agencies concerning Israel and would urge future governments to maintain them.

Daniel: As a community-backed independent, I believe complex matters of foreign policy are best left to experts.

In government, what would you do to encourage the adoption of the IHRA working definition of antisemitism by universities and civil society organisations?

Liberal: The Morrison government has embraced the definition. The government is committed to ensuring that freedom of religion, freedom of speech, and freedom from discrimination, including on the basis of race or religion, are all protected and promoted.

Labor: Labor has adopted the IHRA definition and encourages other organisations to consider doing so.

Hodgins-May: We value the important discourse in the community on documenting and defining antisemitism, which reflects our own commitment to combating antisemitism and all forms of racism. We are deeply committed to using every resource to fight every form of discrimination and racism including antisemitism, and will push the major parties to implement a national anti-racism strategy.

Spender: I support the IHRA definition of antisemitism. If elected, I would work as a genuine conduit between university leaderships and other civil society organisations and Jewish community groups on the adoption of the definition. This is an issue which, if realised to its maximum potential across civil society, can go a long way towards negating demonstrations of antisemitic and anti-Israel sentiment.

Daniel: I support the IHRA definition of antisemitism. As the community-backed independent candidate for Goldstein, I understand the unique challenges the Jewish community faces with regards to antisemitic hate speech. I am a vocal proponent of Section 18C of the Racial Discrimination Act and would seek to strengthen it to address the scourge of racial vilification.

Religious freedom – the key concerns of the Jewish community include preserving our freedom to preference enrolment of Jewish children in Jewish schools; cater specifically for the Jewish community in Jewish facilities, charities, voluntary associations and clubs; restrict membership of associations and clubs, or their boards, to people of the Jewish faith; express our religious beliefs freely. Do you consider any of these concerns invalid or illegitimate?

Liberal: Our government introduced the Religious Discrimination Bill into Parliament in the hope of enshrining these freedoms into law. It ensures religious schools are free to hire teachers who share their faith and to build a community around their faith. It ensures people are free to practise their faith and make reasonable statements of their belief. It enables associations and community groups to operate in accordance with their faith-based beliefs.

Hodgins-May: The Australian Greens support legislation that protects the rights of people to hold and practise their religious beliefs. There are, however, significant flaws in the [government’s] bill. The Australian Greens set out two recommendations; that the government develop a Charter of Rights, to protect religious belief among other protected attributes [and] that any new religious discrimination bill adopt a similar approach to other anti-discrimination legislation, operating as a shield not a sword.

Spender: All the concerns mentioned are valid and legitimate. At the same time, in any future legislation I would seek to ensure that people of faith and non-faith are protected from discrimination, while taking care to avoid removing protection for other groups, such as those identified by sexual orientation.

Daniel: I support the Jewish community’s efforts to provide culturally appropriate education and services to its members and believe that government should offer the necessary support to ensure this is made possible.

Next week: ECAJ co-CEO Peter Wertheim provides his analysis of the survey.

Full responses from all parties and candidates can be viewed on the ECAJ website: ecaj.org.au