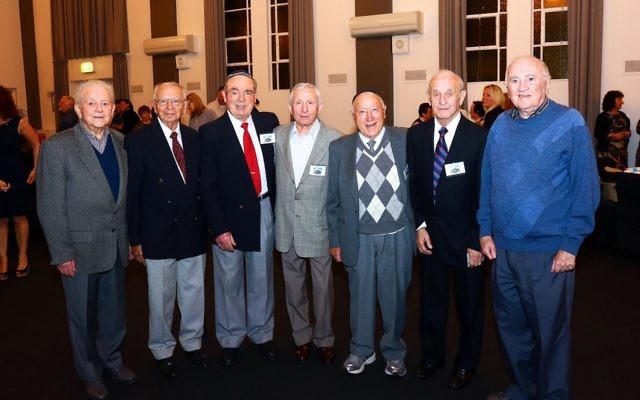 SEVENTY-ONE years since the liberation of the Buchenwald concentration camp in Germany, approximately 150 people gathered to celebrate the contingent of survivors fondly known as the Buchenwald Boys.

Sunday evening marked the Buchenwald Ball, a long-running tradition in which the Boys and their families rejoice the anniversary of their liberation on April 11, 1945.

“Everyone really enjoyed themselves,” she told The AJN. “The room was buzzing from beginning to end … the spirit of the Buchenwald Boys is palpable.

“What really struck me about the night was how many third-generation [survivors] there were,” she added.

Although the numbers are sadly dwindling, seven of the surviving Buchenwald Boys were present, including Kuba Enoch, who travelled from Sydney for the occasion.

Each year prior to the celebration, a commemoration is held at the site of the Buchenwald memorial monument at Springvale cemetery.

Survivor Joe Kaufman addressed this year’s commemoration, along with members of the second and third generations.

Kaufman survived Buchenwald with his brothers Bernie and Moti, but Moti was later killed fighting in Israel’s War of Independence in 1948.

He talked about the unique bond the boys shared on coming to Australia, looking out for one another as they each sought to find places to live, jobs, and partners.

“We became best men and groomsmen at each other’s weddings and later we became the uncles and aunties to one another’s children,” he said, noting: “We all shared so much because we survived so much.

“The hardships of Buchenwald were torturous to endure … [We were] emaciated to just skin and bone but we never lost the hope in our survival.”

He strongly condemned Holocaust deniers, and quashed any contention that the Germans didn’t know what was happening to the Jews in Germany and Europe.

“Of course they knew about the Jews’ disappearance. They just did not care!”

He appealed to the second and third generations to be the reminders to the world at large of what happened to the Jewish people.

“Tell your children and grandchildren that you are the custodians of the testimonies of the few survivors who lived to tell the horrors of what they had experienced and witnessed,” Kaufman said.