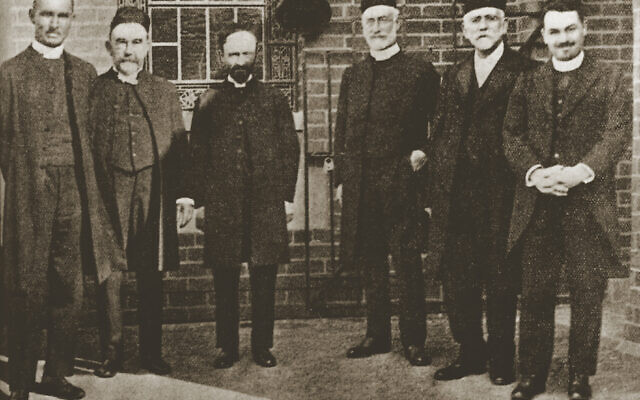 Unfortunately too late for inclusion in the relevant edition of The AJN, my attention was recently drawn to the fact that Lag b’Omer this year was the 60th yahrzeit of the late Rabbi Jacob Danglow.

Rabbi Danglow (initially titled “reverend” and later granted the title “rabbi”) served the St Kilda Hebrew Congregation for a record 52 years from 1905 to 1957. It was a period of tumultuous change, spanning two world wars, the Depression and the establishment of the State of Israel.

It was also a period in which the Victorian Jewish community grew exponentially, and changed significantly in composition from its Anglo-dominated beginnings and in its comparatively laid-back attitudes to religious practice. Rabbi Danglow himself changed over time – negativity (or at best hesitancy) towards Zionist ideals and activities rooted in his British loyalty changed after the state was established, as did (once Mount Scopus was established) his initial objections to the establishment of a Jewish day school on the grounds that separatism could promote antisemitism.

He should, however, also be particularly remembered as the person who, unsatisfied with the way synagogues interacted with non-Jewish funeral parlours, established the Melbourne Chevra Kadisha in 1909.

Tall, always immaculately dressed and imposing, wearing the clerical collar – as was the ministerial wont of the Christian ministerial colleagues as well as the reverends (mainly trained in Britain or Germany) who served the Jewish community – he was to many the epitome of a minister. But – as was once confided to me by the late Sir Zelman Cowen, who was known to be a great admirer of Rabbi Danglow – while he saw him as the epitome of a minster, he said his son (Rabbi Dr Shimon Cowen) would probably not agree as he lived in a different milieu. And that brings me to the changes that have occurred in the rabbinate in the postwar and contemporary eras; in that context expectations of the rabbinate – especially but not solely the Orthodox rabbinate – have changed dramatically.

Duties of the very earliest ministerial appointments extended beyond shule and life-cycle functions to shechita, brit milah and teaching, but that changed over time as those specialised roles were otherwise implemented. However, European immigration saw a change in the expectation from a rabbi. The 1932 arrival in Melbourne of Rabbi Joseph Lipman Gurewicz marked the beginning of change, including the expectation of a much more substantial level of learning as well as stricter shechita and kashrut supervision.

The postwar era saw a series of rabbinic appointments – not reverends in the British model – with backgrounds in the great yeshivot of Europe. These were particularly appropriate for communities dominated by European immigrants. Education was the function of the United Jewish Education Board and then day schools, though rabbinic involvement was sought in the education area. Rabbis Aryeh Kaplinski, Sholom Gutnick and Shlomo Rudzki taught at Melbourne’s Yeshivah College while Rabbi Jacob Shreiber taught at Mount Scopus College. Rabbi Chaim Gutnick in Sydney and Rabbi Lubofsky in Melbourne would be involved in religious education in state schools while Rabbi Lubofsky would soon become deeply involved in Mount Scopus. Teaching aside, Rabbi Baruch Abaranok would be a key to development of what we now know as Kosher Australia.

The “rabbinic couple” of today and the rabbi of a Chabad House are a far cry from the ministers of the prewar era. Trained in a yeshivah and/or kollel, they have a totally different expertise in halachah from the ministerial training of those early ministers. I recall once being asked about a certain young appointee as to whether he had a “presence” that the questioner – a more experienced communal rabbi somewhat apprehensive at the increasing communal role played by Chabad graduates – deemed an essential part of the ministerial character. Rabbi Lubofsky often expressed concern at the loss of the art of the sermon.

The reality is that while such may be important they are now far from crucial. Duties as now expected go far beyond the conduct of services, officiating at lifecycle events and a limited amount of teaching. Facilitation of and participation in events, once the role of perhaps a youth director, a dedicated board appointee or even a second minister, are now clearly part of a rabbinic role. Increasingly synagogues may also expect abilities in the direction of interaction with the broader Australian community – including interfaith connections.

So much for those termed rabbis in what I call suburban congregations. What about the “mara d’atra” or rov of those congregations where stricter observance is a hallmark of membership and primary rabbinic duties extend beyond shule and associated functions to perhaps school, kashrut and other communal services, as well as regular provision of halachic rulings of a personal and communal nature.

For those positions requirements are much more than s’michah, extending to a much higher level of learning and knowledge of textual literature and ability to present it to their community. And even those aside, having just spent a period of time in Yerushalayim where I frequented very traditional communities, whose members are themselves extremely knowledgeable in Torah and halachah, and where the sermon is replaced by what amounts to high-level shiurim, I saw that in such instances it is the requirement of a significant level of Torah expertise involving a breadth of knowledge of halachic literature extending to halachic minutiae and their understanding, that makes for rabbinic appointments very different from most of those with which we in Australia are familiar.

Pirkei Avot enjoins us “aseh lecha – appoint for yourself – a rav”. For communities it is not an easy task.