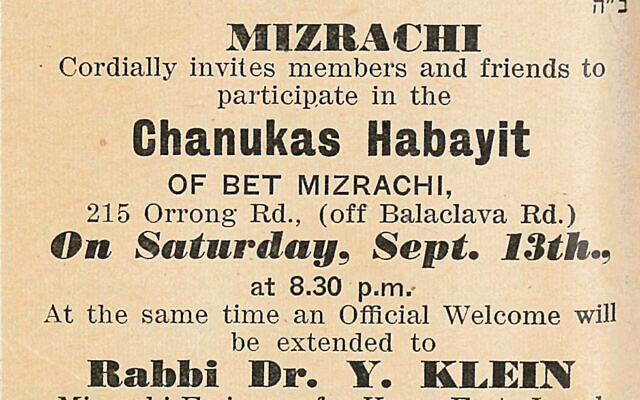 THE exact origins of the Mizrachi in Melbourne are regrettably lost in the mists of time. In July 1938 meetings in Carlton involving inter alia Rabbi LJ Gurewitz, rov of Carlton shule who is referred to as chairman of the local Mizrachi, may have been the first step, although there is no evidence of activity in the ensuing four years.

It has been suggested that at some point a group of Orthodox persons met to consider whether the Carlton community should affiliate with the Mizrachi movement or Agudat Israel, but this cannot be verified. But by 1943, “Tzerei Mizrachi” were definitely active with a series of Oneg Shabbat functions at Monash house addressed by speakers including Dr Shlomo Lowy, Mr S Rutski (sic, later Rabbi Rudzki), Mr S Elbaum, Nesanel Slonim, Eli Loebenstein and Rabbi Wishkovsky.

By 1944 educational initiatives were manifold. Bnei Akiva groups met at Hascola in Carlton and at Elwood Talmud Torah. On Sunday, May 21 Rabbi Gurewitz was speaker at a packed evening function at the former premises of the Chassidisher shtibel, 429 Cardigan St that would soon formally become the (rented) home of Mizrachi. The topic was the Rambam and his writings. Subsequent speakers at such gatherings would include Rabbi Chaim Dov Silver, Rabbi H Blumenthal and Rabbi Freedman. Mr Elbaum commenced a regular Sunday evening Tanach shiur at Cardigan St.

Typical of the functions that took place during the postwar years was a 1945 Young Mizrachi Chanukah celebration. Candles were kindled by Manfred Levy A welcome address by newly elected president Saul Wiener was followed by Ze’ev Aron speaking about Chanukah. Sarah Honig presented a humorous Chanukah story by Peretz, while Mendel New read a description of Chanukah celebrations in Eretz Israel. Following a recitation in Yiddish by Ella Honig, the younger people danced the hora.

For the balance of the time that Mizrachi operated in Carlton a melave malka (Literally “farewelling the queen”, a traditional after Shabbat celebration) was a frequent way for community members to get together, with programs including addresses by Rabbi Gurewitz and others. At a time when travel was a remarkable occurrence, travellers to and from Palestine such as Rabbi Freedman and Abraham Leibler were farewelled or welcomed at such events.

The welfare of children, including spiritual needs, was already a serious consideration. Talmud Torah classes aside, the summer of 1945/6 saw the establishment of a youth holiday committee with programs run by Mr and Mrs Herz, who were also becoming known for speaking of the need for a Jewish Day school.

However, it was not until 1947 that the first Mizrachi minyanim began for the High Holy Days. They were held in the Drummond St Bialik school premises, with income going to a children’s home in Israel. Simultaneously there was a Bnei Akiva youth minyan at Elwood Talmud Torah. Also in Elwood, Ze’ev Aron carried on with the study circle at the Southey St home of Solly Slonim. It would morph into a Young Mizrachi Shabbat afternoon shiur at his Dryden St home that lasted till the mid 1950s.

Mizrachi members participated in the celebrations of the dramatic events of November 1947 and May 1948, as well as those of Shabbat Nachamu (Aug 21, 1948) that was the declared Israel Day across the community.

By June 1948 Mizrachi had formally moved into the Hascola building. Between Mincha and Maariv Rev Rudzki and Moshe Kantor learned Ein Yaakov.

An interesting development was a Young Mizrachi summer 1948/49 holiday camp arranged as “a literal and practical application of Torah v’Avodah in Australia”. One half of every day was devoted to fruit picking in the orchards around Shepparton, the money earned to be sent as a Young Mizrachi contribution to Eretz Israel. The other half of the day was devoted to lectures, discussions, learning together or recreation and sport. The intention was that participants would realise what it meant to live, work and learn together with the one common aim and motto “Torah v’Avodah”.

Rabbi Kopul Rosen visited Sydney and Melbourne for the International Mizrachi Appeal, whose aims included support for religious education in Israel. He spoke of the need for Jewish schools locally – the opening of Mount Scopus was pending, yet not fully supported communally.

1949 saw a strong Young Mizrachi executive elected: Manfred Levy president, Mendel New vice-president, Edward Pachtman secretary, and Sam Meerkin treasurer. Among others elected were Nettie Rechter and Jonathan Schenk. The Young Mizrachi resolved to increase its work on behalf of religious Zionism by living according to the rules of Torah, endeavouring to learn Ivrit and urging chaverim to prepare themselves to go on aliyah by undergoing hachsharah to fit themselves for life in Israel.

While the Sydney Jewish community lacked the momentum that characterised the Carlton-based Melbourne community, December 1949 saw the first steps towards formation of a Sydney Mizrachi organisation under the patronage of Rabbi Dr I Porush. President was Rabbi E Berkovits, members of the executive were Messrs A Rabinovitch, N Haneman, Mr Braham Mr Rosen, W Wise and E Shereshevsky.

The official opening took place on Sunday, December 3. Congratulations were received from all the Zionist associations, many congregations and Rabbi Porush of Sydney. Mrs S Klein spoke on behalf of Ladies Mizrachi, while Bernie Pushett and Benny Slonim represented Bnei Akiva. Acting president David Feiglin explained that the executive had undertaken responsibility for the Beit Mizrachi for two reasons. The youth badly needed a permanent home, and there was great need for a cultural centre from which Torah and Zionism would emanate.

Frequent screenings of Israeli and Yiddish films, lectures, bazaars, dinners and other functions would take place at the premises. Trustees were Messrs D Feiglin, J Kappel and AS Leibler. Moshe Zalman Feiglin affixed the first mezuzah.

Regrettably though, it would soon emerge that the days of Carlton as Melbourne’s Jewish centre were numbered. At the eighth AGM in July 1952 David Feiglin pointed out that the Beit Mizrachi in Carlton had not been able to fulfil the functions for which it had been bought. Recent newcomers were settling south of the Yarra, with the majority of Mizrachi associates now in St Kilda, Caulfield and Elwood. Mizrachi leadership approached Mr Shimi Klein who hosted a minyan in his home in Howitt Rd, Caulfield and proposed that his minyan joined Mizrachi’s as an equal partner if Mizrachi moved to Caulfield. On the basis of a succesful agreement the Carlton property was sold (at a profit), and a house at 215 Orrong Rd purchased in its stead. Once again Messrs D Feiglin, J Kappel and AS Leibler were appointed as trustees.

The Chanukas Habayit (sic) on Motzaei Shabbat, September 13 was addressed by Rabbi Fuerst with chazanut by chazan Gescheit. Once again Reb Moshe Zalman Feiglin affixed the first mezuzah. However, the keynote speaker for the evening was Rabbi Dr Yuketial Klein, Mizrachi emissary for Keren Eretz Israel then visiting Australia. Supper was followed by the first selichot at midnight led by Rabbi Klein.

Thus began the history of Mizrachi in Caulfield, which has flourished for 70 years so far. We all anticipate that it will continue to serve the community growing “mechayil el chayil” (from strength to strength), pending the re-establishment in our land of all batei knesset and batei midrash of the Diaspora bimhera beyamenu – speedily in our time.