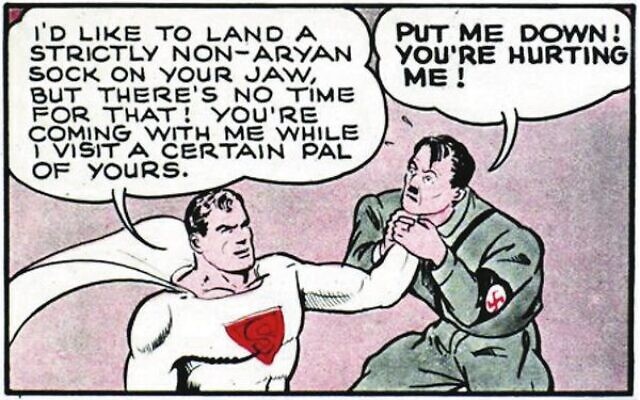 In the 1930s and 1940s, comic books were considered so low on the publishing totem pole that they even accepted Jews as employees. The industry didn’t just accept Jews, it was created by Jews, who had been forced out of work from American newspapers due to antisemitic quotas.

As MAD magazine cartoonist Al Jaffee has said in the past, “We couldn’t get into newspaper strips or advertising; ad agencies wouldn’t hire a Jew. One of the reasons we Jews drifted into the comic book business is that most of the comic book publishers were Jewish. So, there was no discrimination there.”

Superman, who was created by Jerry Siegel and Joe Shuster, is arguably the most famous character in the world. He’s the first superhero, and according to Roy Schwartz, he’s Jewish.

Is Superman Circumcised? The Complete Jewish History of the World’s Greatest Hero was inspired by Schwartz’s grad thesis about heroic figures and the heroic concept in Jewish tradition compared to the Anglo-Christian one, from the Bible to comics.

The book has a different focus though. 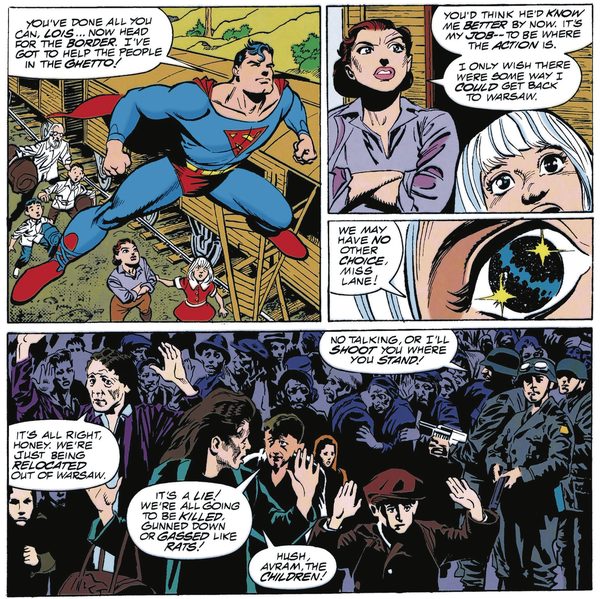 A Superman sequence whose final frame depicts a classic Holocaust photo from the Warsaw Ghetto.
Photo: Roy Schwartz/Times of Israel

“It’s about the origins of the comic book industry and superhero genre with Jewish immigrants and their children during WWII, following the development of the field through the decades from this perspective, with a focus on Superman as the archetype and the richest in Jewish meaning,” Schwartz told The AJN from his home in Long Island.

According to Schwartz, the Man of Steel was based on several people from the Torah.

“[Siegel and Shuster] based their hero’s origin story on Moses, his strength on Samson, his mission on the golem and his nebbish secret identity on themselves,” Schwartz writes in the description. “They made him a refugee fleeing catastrophe on the eve of World War II and sent him to tear Nazi tanks apart nearly two years before the US joined the war.”

In the decades that followed, Jewish motifs continued to weave through Superman’s stories. Krypton’s past was based on Genesis and Exodus, its civilisation on Jewish culture, the trial of Lex Luthor takes inspiration from Adolf Eichmann’s trial and the holiday celebrating Superman is based on Passover. 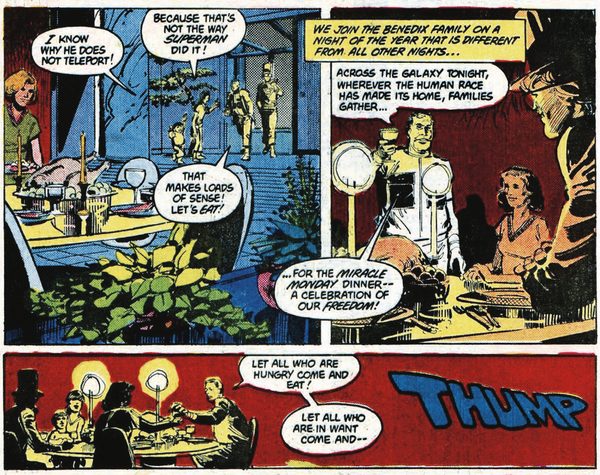 Miracle Monday is a nearly verbatim depiction of the Passover seder. Photo: Roy Schwartz/Times of Israel

All of this is explored in Is Superman Circumcised?

With so much to discuss and what could be considered a highly contentious topic, Schwartz still managed to surprise himself with the amount of information available.

“Superhero comics, particularly Superman’s, are overflowing with Jewish themes, symbolism and even biblical narratives given a sci-fi twist,” he said. “I originally pitched the book to the publisher as a breezy, 50,000-word book. By the time I was done researching, my notes clocked in at 196,000 words. But don’t worry, the book’s not nearly that long, and it has a lot of visuals.”

What Schwartz struggled with was the pushback he received from people who thought he had an agenda.

“People have a sense of ownership with Superman. Everyone grew up with him. I understand the reaction, to want to protect your ideas. But not everyone is intelligent enough to say, “Well, let me read what he has to say before I state my opinion,” Schwartz told the Times of Israel.

“This book isn’t about ownership, it’s about recognising contributions. No one says, ‘You are white, you can’t listen to jazz,’ so I am not making any similar arguments. It’s about tracing origins.” 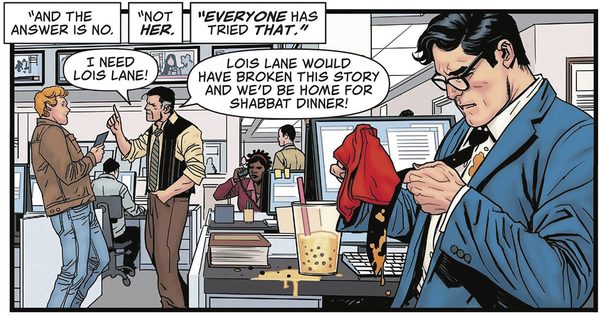 Some of Clark Kent and Lois Lane’s co-workers are late for the Shabbat meal. Photo: Roy Schwartz/Times of Israel

Schwartz, who has read every Superman comic book ever published, has watched every movie, cartoon and television episode, and has read every article written in the American press about Superman. Sounds extensive but for Schwartz it was necessary to fully understand his subject.

“Some months ago my wife and I were watching an episode of Supergirl, and she says, ‘Kara is who I am, Supergirl is what I do,’ and I snap, ‘That is a quote from Lois and Clark season two, episode 18!’ My wife looks at me wide-eyed, like, we may have to get a divorce,” he told the Times of Israel.

Is Superman Circumcised? has been a labour of love for the self-confessed comic aficionado. Schwartz has been “researching” superheroes since he was a child.

“I spent the formative years of my education filling out school notebooks in nearly every class with stories and comics and what I would later come to realise were essays,” he writes in the book’s preface.

But Schwartz was interested in more than just the action and spectacle, going on to explain that his speech bubbles and captions were filled with all kinds of questions around the use of violence and the subjectivity of good and evil.

“Of course, to my teachers all this was just silly doodling I was wasting my time on when I should have been paying attention. But I knew better!” he continues. 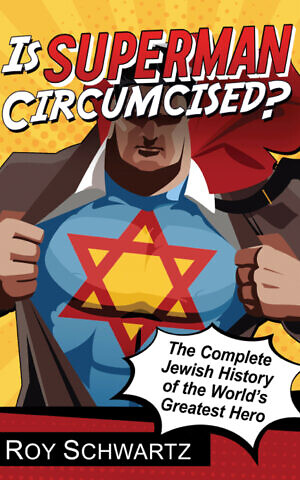 And his latest book shows just how deep he was willing to dive to investigate Superman’s religion.

“Hopefully I did my job well and the book is informative as well as fun to read,” he said when The AJN asked what he hopes to achieve with the book.

“I’d like readers to come away with an understanding of how and why the comic book medium and superhero genre came to be, and recognise that, even though they’re ‘just’ comics, they really are Jewish literature. And, with any luck, also give readers a newfound appreciation for the Mensch of Steel!”

Is Superman Circumcised? The Complete Jewish History of the World’s Greatest Hero is published by McFarland Books, $104.75 rrp