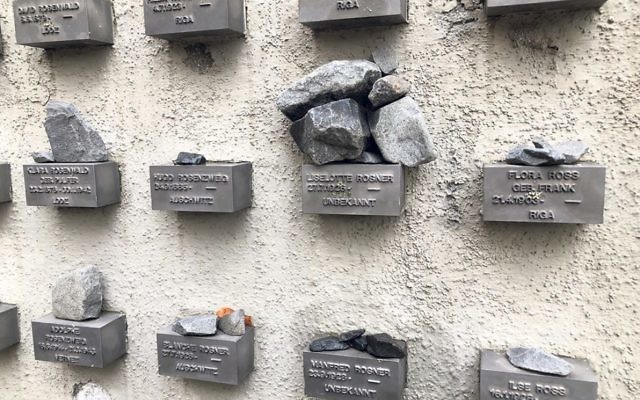 THE cry was as jarring and intrusive as it was unexpected. Huddled against a bracing Frankfurt autumn morning, the delegation of Jewish leaders from centres as diverse as Novosibirsk, Siberia, and Buenos Aires, Argentina, was listening to an outdoor briefing about the turbulent history which lay behind a sign that simply said “Judenmarkt”.

Just metres away was an elongated grey wall, its surface punctuated by tiny metal boxes – simulated coffins? – each bearing biographical details of one of the 11,500 Jews of Frankfurt who were murdered in the Holocaust. And behind the wall a now-disused Jewish cemetery.

Suddenly, a cream-coloured Mercedes taxi raced towards us; as it passed, the driver lowered his window and yelled “Alles luege!” – which translates, unfortunately, to “All lies!”

The irony that the vicious invective occurred during the final presentation on the final day of a week-long government program titled “Jewish Life in Germany” was not lost on the international visitors, while visibly rattling our guide’s composure.

A commendable initiative of the German Foreign Ministry, the comprehensive schedule of briefings, memorial visits and participation in ceremonies marking the 80th anniversary of Kristallnacht immersed us in the fraught situation in which the German government and the nation’s 250,000 Jews find themselves.

Headlining the most disturbing aspect of the evolving landscape is the eruption onto the political scene of an extremist party with neo-Nazi elements, the Alternative for Deutschland (AfD). From a standing start, it burst into prominence in September 2017 and now occupies an alarming 92 seats in the Bundestag (German parliament), making it one of the country’s largest opposition parties, while boasting MPs in all 16 of the nation’s state parliaments.

Exploiting widespread anger at the 2015 influx of one million Syrian refugees, its principal platform is opposition to Muslim immigration. In this context it presents itself as a safe harbour for Jews, launching a Jewish group at a recent meeting in Wiesbaden. The good news is that only 19 Jews showed up, while 400 Jews staged a counter-demonstration and affirmed that they would have nothing to do with the AfD, consistent with the policy of the country’s peak Jewish organisation.

While the rise in antisemitic incidents is attributed in part to the left, to Islamists and to refugees, an estimated 94 per cent are perpetrated by far-right extremists – all of which has motivated Germany’s Foreign Ministry to establish a position dedicated to combating antisemitism and liaising with German Jewry. The appointee is Dr Felix Klein, who addressed us at last week’s Kristallnacht ceremony in Frankfurt and is building a department to devise a strategy to promote Jewish life in Germany. At the same time, 300 municipalities across the country are engaged in programs against hate.

While German Jews are spread across 103 communities throughout the country, creating significant logistical challenges, there are many positive events on the country’s Jewish calendar. They include: Jewrovision – the largest music festival for Jewish youth in Europe, annually bringing together 1000 Jewish teenagers for an entire weekend; Kippa Day, when the mayors of Frankfurt, Berlin, Munich and Cologne invite male citizens to turn up at City Hall wearing a kippa as a mark of solidarity with Jewish citizens; a project to educate Syrian refugees about the Holocaust and antisemitism; the import of Arab-speaking Israelis in an effort to build bridges to the refugees; and a conference last week by Jewish youth on the future of Germany’s Jewish community with the upbeat theme “Because I want to live here”.

Meanwhile, Berlin leads the way in publicly acknowledging the Holocaust. Apart from the iconic landmarks such as the massive memorial just 200 metres from the Brandenburg Gate and its major museums, 6000 Stolpersteine (stumbling blocks) – metal plates – are inlaid into pavements across the city at the sites from where Jews were deported, their personal details engraved.

And, chillingly, we came across a bus stop outside a large hotel featuring massive billboards with information about Holocaust mastermind Adolf Eichmann – because the hotel is located on the site of Eichmann’s headquarters, from where he directed the killing operations.

So the situation is complex. German Jews – who today include possibly as many as 30,000 Israelis – are overwhelmingly positive, while expressing concern at the emergence of the AfD. At the same time, an increasing number of British Jews are applying for German citizenship in the event that Jeremy Corbyn becomes that country’s prime minister.

Yet there are Germans – a growing phenomenon among younger demographics – who are angry with the Jews because of the Holocaust, who in fact have not forgiven the Jews for the Holocaust. There are 1600 years of rich Jewish history in Germany, they point out; why this obsession with 12 of those years?

How succeeding generations tackle and answer that most vital of questions will hold a key to the future of that country’s Jewish community.

Vic Alhadeff is CEO of the NSW Jewish Board of Deputies. He travelled to Germany as a guest of the German Foreign Ministry.