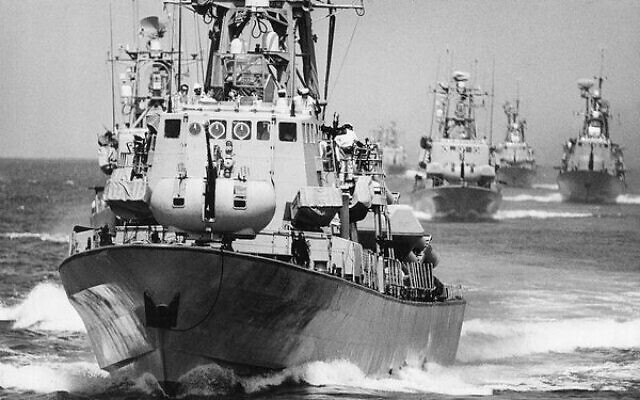 AN international deal that would see France construct and supply naval vessels. The deal scuppered. The French irate as the saga unfolds. A diplomatic stoush between erstwhile friends played out in the glaring headlights of the international media.

No, we’re not talking about the unedifying war of words between President Emmanuel Macron and Prime Minister Scott Morrison following Australia’s cancellation of the $90 billion submarine contract with Paris. Rather we’re turning the clock back to 1969 when the French refused to hand over a number of patrol boats they had built for the nascent Israeli Navy – boats that Israel had already paid for – after imposing an arms embargo.

Relations between the two countries had been deteriorating since the 1967 Six-Day War as France tried to curry favour with the Arab world, but they took a turn for the worse in December 1968 when Israel responded to a deadly terror attack by the Lebanon-based Palestinian militant Popular Front for the Liberation of Palestine, by destroying a number of planes at Beirut Airport.

French President Charles de Gaulle lamented the strike on a “traditional friend of France” and, while seven boats destined for Israel had set sail some months earlier, five remaining boats in the fleet were detained in Cherbourg where they were being built.

Israel, though, was desperate to get its hands on them. Its existing navy was made up of obsolete World War II vessels and it was aware the Soviet Union was supplying new missile-carrying ships to its Arab enemies.

And so a daring plan was hatched. Having set up a dummy company in Norway which ‘purchased’ the boats so that work could continue on them despite the embargo, and having flown Israeli sailors masquerading as civilians into France to covertly join the skeleton Israeli crew stationed in Cherbourg, on Christmas Eve, under cover of darkness and while the locals were distracted by festivities, Israel ‘stole’ its own ships – sailing them out of the harbour.

Among those on board was former JNF NSW executive director Ygal Shapir. Aged just 20 at the time and Chief Engineer on one of the vessels, he told The AJN this week, “The mood was that we were making history, but there was no time to celebrate as immediately after leaving the port we approached a force-nine gale.”

Perilous weather wasn’t the only threat. When the French government learnt what had happened, the defence minister called for the boats to be bombed and sunk. But fortunately, he was overruled.

The carefully-planned operation saw the boats refuelled by support ships en route to Israel, while the world’s media covered their journey, some saluting their audacity. As they passed Gibraltar, a British monitoring station signalled them, “Bon voyage”.

A few days later the flotilla arrived in Haifa with the crew greeted as heroes. “We were welcomed by the minister of defence, the chief of staff and of course the Navy command,” recalled Shapir.

Three years on, having been converted into state of the art missile carriers, which using pioneering and revolutionary Israeli technology were able to guide their missiles while deflecting incoming enemy missiles, the boats played a key role in the 1973 Yom Kippur War.

Incurring no losses themselves, they successfully sank Syrian and Egyptian ships that had launched attacks, after which no Arab vessels left their harbour.

“This was a turning point for the Israeli Navy,” remarked Shapir, noting that between 1967 and 1973, it was “converted from an old World War II fleet to the most advanced missile boats fleet”.

It was also, he observed, “the first time in maritime combat that missiles were shot by both sides – these battles were later studied in the war colleges of many navies.”

As for the French embargo that prompted the mission, Shapir stated, “At the macro level I think there was a high degree of disappointment in the way the French behaved to an ally. France was at that time the main supplier of weapon systems to Israel. This act pushed Israel to start procuring military systems from the USA.”

So has Australia given France a taste of its own historic medicine?

“I do feel that the French deserve it, if you link the two episodes,” Shapir told The AJN.

“In our case they decided to walk out of the agreement because they had changed their approach and diplomacy towards the Arab world. They were looking for an excuse and had found it.”