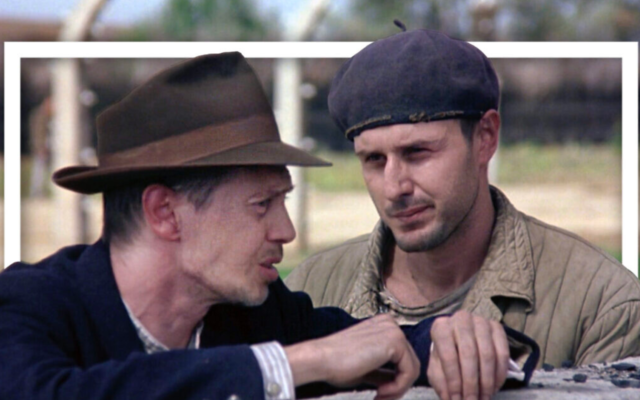 Steve Buscemi and David Arquette in The Grey Zone. Photo: Screenshot via Lionsgate Entertainment, illustration by Grace Yagel via JTA

In 2001, The Grey Zone was set to premiere just after the attacks on the World Trade Centre and the Pentagon. It never really saw the light of day.

According to Steven Spielberg, it was the greatest Holocaust film ever made. So much so, that less than a decade after making Schindler’s List, Spielberg considered distributing it himself.

The film focuses on the challenges faced by the Sonderkommando, both moral and philosophical, as they worked to dispose of bodies, and in return were granted slightly better treatment by the Nazis. It draws on writings by Primo Levi and also on the true story of the rebellion at Birkenau by the Sonderkommando, when on October 7, 1944, Jewish workers destroyed two of the four crematorium complexes.

The Sonderkommandos were faced with “grey moral choices” – nothing was black and white. And it is this complex, layered story that has been told through The Grey Zone.

Yet still, it remains to be seen by much of the public.

For Nelson though, he remains very proud of the film. “There’s nothing I’ve done that’s more important to me than The Grey Zone,” he told the Jewish Telegraphic Agency in an interview looking back on the film.

“And it doesn’t matter that most people have never even heard of it.”