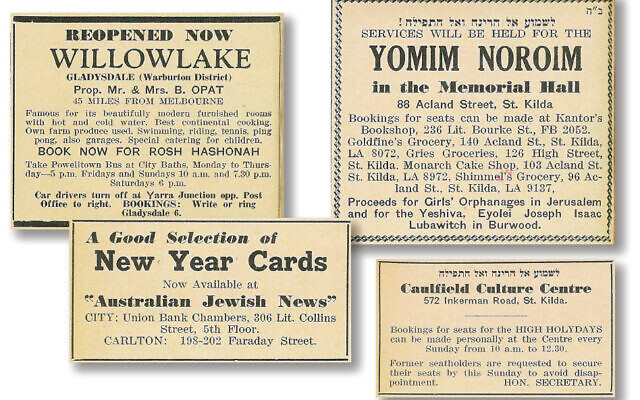 Advertisements in The AJN for Rosh Hashanah 1952

Going through old editions of The AJN held in our office I found fascinating the advertisements prior to Rosh Hashanah 1952. They are really reflective of an era past in their content per se, as well as their references to forerunners of today’s institutions and establishments – some fondly remembered by the older generation, albeit they are now gone.

A highlight of services at Melbourne Hebrew Congregation was to be the presence of newly inducted Rabbi Dr I Rapaport. At St Kilda, services took place under the leadership of long-serving Rabbi J Danglow. Caulfield Culture Centre (forerunner to Caulfield Hebrew Congregation) was taking bookings for seats for the High Holy Days. Chazan E Schwartz was to lead services at Elwood Talmud Torah (then still in Avoca Avenue).

Often, congregational venues were too small for High Holy Day crowds, so alternative venues were hired. Although new Mizrachi premises were to open for selichot, main services would take place, as previously, at communally popular venue, the Empire Ballroom in Chapel St. South Caulfield Hebrew Congregation held services in the Scout Hall in Birch St off Hawthorn Rd; tickets were available from the 16 Winston Drive home of its founding president Mr S Herz, where the congregation had begun as a minyan. The Moorabbin and District Hebrew Congregation announced services in Moorabbin Town Hall with the promise: “Good chazanim will officiate.” Seats were one guinea or two guineas (21 shillings or 42 shillings) – these seem to have been pretty standard prices across shules. Brighton shule had services as well.

A minyan for the “Yomim Noroim” was to be held in the Memorial Hall in Acland St, St Kilda. The Melbourne Yeshivah shule as we know it today would not come into being till 1954, but in this case proceeds were to go to girls’ orphanages in Jerusalem and the Lubavitch yeshivah in Burwood. There was also a minyan at the Bialystoker Centre in St Kilda.

Residents of Coburg and surrounding areas were invited to “a minyan at the home of Mr J Ross. Chazans (sic) Mr Applebaum and Mr Bush”. Seat availability was also advertised by the more established congregations north of the Yarra: East Melbourne, Carlton and Brunswick. The Yiddisher Nayes (but not the English language paper) had advertisements for additional minyanim in Moonee Ponds, Thornbury, and Carlton’s Hascola Talmud Torah.

Temple Beth Israel’s High Holy Day services were to take place at St Kilda Town Hall but a youth service would be held at the Alma Rd premises. Chazan S Gescheit was to officiate at the Beth Nachman synagogue of the Kew Jewish Centre, already then at Walpole St, Kew.

Metropolitan shule attendance aside, you could take the holidays at Carmel Kosher Guest House in Hepburn Springs. Rollers Continental House in Hepburn Springs clearly directed their advertising to European immigrants by saying that Hepburn was “the Karlsbad of Victoria”. (In prewar Europe “taking the waters” at Karlsbad was a favoured Jewish recreational option.) Implicit in the advertisement was an interesting definition of luxury – hot and cold water as well as inner spring mattresses in every room. A “continental table” was complemented by gardens and lawns. Willowlake at Gladysdale in the Warburton district also advertised: “Book now for Rosh Hashanah.” It too was famous of its modern furnished rooms with hot and cold water. Proprietors Mr and Mrs B Opat provided “the best continental cooking – own farm produce used”.

In the era of “Tzena” (austerity and rationing in the young State of Israel) vouchers could be purchased at a number of listed outlets to be sent as new year gifts to relatives and friends in Israel. Those vouchers could then be used in Israel to purchase parcels of meat, fat, milk, cheese and other essentials beyond ration limits otherwise applicable. A special chocolate package was also an option. Separately, Continental Kosher Butchers, then with outlets in Lygon St, Carlton and High St, St Kilda, advertised tinned meats which “are the best of gifts for your family and friends in Israel”. Also in regard to meat, Hoffstatter and Lowy announced the opening of a poultry shop – the forerunner of today’s Eshel shop and catering.

Sydney had advertised services at The Great Synagogue, Central, Bondi Mizrachi, Temple Emanuel, North Shore, South Head, Coogee, Bankstown, Strathfield and the Western Suburbs synagogue Those aside, the Maccabean Hall was going be busy. In addition to a Great Synagogue overflow service in its main hall, there was not only the “Sephardic High Holy Day services”, but also: “Orthodox minyan Szeairith Jisroel. Prayers in HOMELY RENDITION on the High Holy Days”. This minyan was to be located in the basement of the hall. Judging by the accent implied by the spelling in that advertisement, it was a forerunner of the Adass.

As was the case with Melbourne Hebrew Congregation, where Rabbi Rapaport had just been inducted, Central Synagogue announced that Rabbi Swift who would officiate there had come to stay. Referring to the influx of new immigrants Rabbi Swift stated that “the Orthodox synagogues will determine which road we will take. Stifle the synagogue and we will start on the road to oblivion.”

Rosh Hashanah services were also to be held at “the Mountains leading guest house” in Leura, while (as was the case in the hills around Melbourne) various other resort/guest houses advertised holiday availability, though they were not kosher and presumably without services.

Dare I conclude by pre-empting the inevitable “you missed out xxxx” complaints that some readers may have. My intention was just to give some indication of the community as it was in the early 1950s, for indeed Australian communities too were then well prepared for the High Holy Day period.