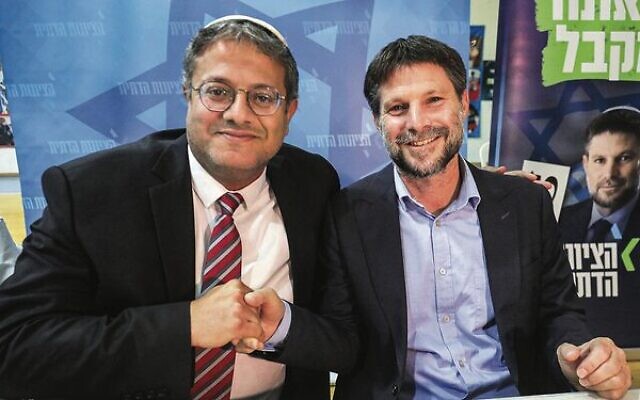 As the Israelites were taken into exile after the First Temple was destroyed, God told the prophet Ezekiel how they would return, and create a kingdom that was stronger than before.

He told Ezekiel to take two sticks, one symbolising the tribes that made up the northern kingdom that had fallen to the Assyrians, and one representing the southern kingdom that has just been conquered by the Babylonians. Ezekiel was told to hold them together, to show how the rejuvenation of the Israelite nation would begin with reunification. All the blessings that were to follow had to begin with unity within the nation.

That is a lesson for the ages, and an idea we should be thinking about, both as Australians and as Zionists, when we look at politics here and in the State of Israel. Unity in a democracy depends on everyone agreeing to the same rules of the game, and respecting everyone who has a right to be on the pitch.

It does not mean, indeed it should not mean, that everyone has to agree. But productive disagreements are only possible if everyone remains committed to a shared political framework.

When one or more sides in the political tussle lose that commitment, unity falls away and the whole nation declines.

We have seen that loss here in Australia and in Israel in recent months. In Australia, it is a bedrock of our constitution that ministers are accountable to parliament for their actions. If we do not know who the minister is then they cannot be held accountable by the people’s representatives. As retired High Court Judge Virginia Bell found, when Scott Morrison secretly took on additional ministerial portfolios when he was prime minister he undermined that system. Her report should have led to the proper parliamentary or even legal processes to take their due course.

Instead, Morrison’s political opponents took a different approach. They avoided established constitutional procedures for dealing with misbehaviour, and instead have opted for ritual humiliation and blame shifting. Instead of a parliamentary committee adjudicating dispassionately on Morrison’s behaviour we saw the public spectacle of a censure motion on the floor of the House of Representatives, which turned a serious matter into a political knockabout. We then saw a Royal Commission (into robo-debt) used as a political device, much as the Trade Union Royal Commission was used against Bill Shorten in 2013. We even witnessed the Liberal Party try to pin the blame on Morrison for their electoral loss, as they turned on their former leader. All of this activity, from all sides of the political spectrum, undermines unity and democracy and we all stand to lose out as a result.

The situation in Israel is, if anything, more worrying. There is finally a stable coalition, but we have to be concerned by some of the parties and leaders it comprises.

Bezalel Smotrich, the leader of the Religious Zionism Party, told Arab MKs that their families should have been thrown out of Israel in 1948. He has compared gay people to beasts. He wants Jewish and Arab women segregated in maternity wards.

He has promoted conspiracy theories about the assassination of Yitzhak Rabin, trying to implicate the Shin Bet.

Itamar Ben Gvir, the leader of Otzma Yehudit, has a conviction for incitement to racism. He was excluded from the IDF for being too militant. He used to hang a picture of the terrorist and murderer Baruch Goldstein on his living room wall. He made menacing statements about prime minister Rabin shortly before he was assassinated.

The promotion of politicians like Smotrich and Ben Gvir only undermines the unity of the citizens of Israel, right and left, religious and secular, Jewish and Arab, gay and straight. In undermining Israel’s unity they damage the state and impede its success.

We have to remember that Israel has flourished based on a Declaration of Independence that said the state “will foster the development of the country for the benefit of all its inhabitants; it will be based on freedom, justice and peace as envisaged by the prophets of Israel; it will ensure complete equality of social and political rights to all its inhabitants irrespective of religion, race or sex; it will guarantee freedom of religion, conscience, language, education and culture”. Its future prosperity depends on remaining loyal to these values.

If Australia’s political system and Israel’s society continue to fracture, then as proud Australian Jews, we will have two losses to grieve. Both of the countries that we care so much about will suffer.

We cannot just hope for better leaders, we have to add our voices to the calls for a more moderate, considered and responsible politics, and continue to press for that until it is achieved.

As God showed Ezekiel, we hold the ability to unify our nations in our own hands.