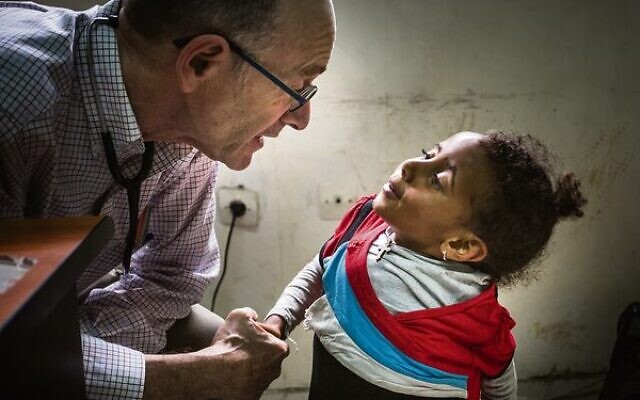 Hodes is the sole spinal surgeon in the poor African nation and has spent more than three decades treating patients in the developing world, saving countless lives in often challenging and testing circumstances.

The Joint Distribution Committee’s (JDC’s or The Joint’s) spine and heart programs, which he runs, have helped more than a thousand people.

Hodes’ patients typically come from the poorest sectors of society, often travelling for days on foot to be assessed and treated. He raises vital funds, and many are then sent abroad for lifesaving complex reconstructive surgeries.

As a guest of The Joint Australia, he will arrive in Sydney this week on his first ever visit to Australia, sharing his specialist knowledge of spinal conditions, cancer and heart disease, as well as his experiences in providing medical care in extreme conditions.

“I have intermittent electricity, intermittent water, lousy internet. I haven’t had water in my house for several days now,” he told The AJN.

“The clinics are much more crowded. The hospital supplies are less. So everything becomes a challenge.”

Describing Ethiopia as “a very bureaucratic country”, he said in order to even get his medical licence he needed the signature of then US secretary of state Condoleezza Rice and “literally a pile of documents 70 pages thick”.

But despite the many challenges, he said, “You just keep going.

“There’s no secret, but you can’t give up and eventually things usually work out.”

And the results, he said, are well worth it.

“Ten years ago, I had this kid who was literally carried piggyback into my clinic office. He was born with a congenital heart problem. He had almost no oxygen. And so his mother would carry him everywhere,” he said.

“We sent him to India, he had heart surgery. His blood then became oxygenated and he was able to walk.

“This guy is now 10 inches taller than I am. And he looks great and he feels great and we saved his life. And his mother just said ‘I have no words to thank you.'”

Hodes, who as a child would read books about doctors working overseas, first visited Ethiopia as a volunteer aid worker in 1984-85. He returned after finishing his residency and being awarded a Fulbright Scholarship, teaching at Addis Ababa University’s medical school for two-and-a-half years. He travelled to the country a third time in the early 1990s to take part in Operation Solomon, the famous airlift of more than 14,000 Ethiopian Jews to Israel in 36 hours.

He explained, “By the summer of 1990, there were 25,000 Ethiopian Jews stuck in Addis Ababa who wanted to go to Israel.

“I happened to be in Israel at the time, and I was reading about this in the Jerusalem Post. I contacted The Joint and said, ‘Can I help you?'” he recalled.

“They said yeah, we’ll hire you for six weeks.”

Hodes has called Ethiopia home ever since.

But that’s just part of the story. In 1999, while volunteering at Mother Theresa’s Mission he met two abandoned orphans with tuberculosis of the spine.

“I ended up adopting them, adding them to my insurance and bringing them down to Dallas, Texas. They live with a Jewish family and they got really good spine surgery,” he said.

“Another kid came along with a bad back and I adopted him and he had surgery the same way.” But he said he realised that “serial adoption is probably not the answer to spinal deformity”, and with more patients to help, he wasn’t sure what to do next.

“He and I decided we could work together. And somebody financially helped me jumpstart my fundraising.”

He recalled that the first patients were sent to Ghana for surgery during Pesach in 2006, as “I left my Passover seder early to work on their paperwork, because they were leaving the next day”.

After a number of years, Boachie-Adjei himself returned to Ghana and opened up a hospital.

Hodes is also involved in training Ethiopian surgeons to ensure his work in the region continues for generations to come.

The Joint, he said, “is crucial to the project”, as is the support of members of the community who donate to the organisation.

“This is the gasoline in our engines,” he said.

Hodes is in Sydney until November 24.