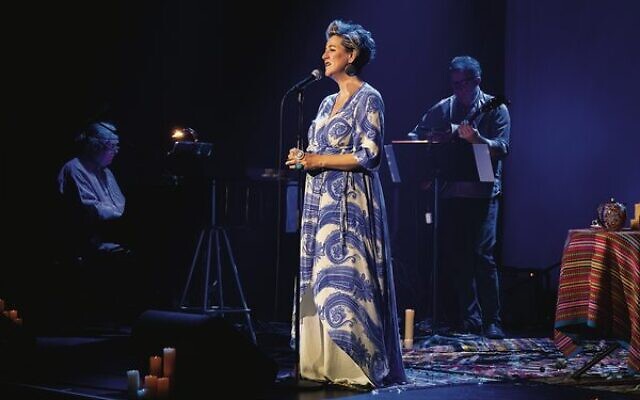 “I thought she was so seventies,” she laughed as she chatted to The AJN. It was a good friend of hers who eventually wore Queenie down, playing her A Case of You from Joni’s album Blue. “Suddenly I could see the beauty of her music and still to this day, it is my favourite song.”

Queenie was hooked. The theatre and cabaret singer became an uber-fan of Joni, writing a celebration show called Blue: The Songs of Joni Mitchell.

The birth of her daughter triggered the writing process for Queenie. Breastfeeding the baby at the age of three months, Queenie suddenly realised that Joni’s daughter was the same age when Joni was forced to put her up for adoption.

“I thought, how could she do that, it must have been so devastating. I was so attached to my daughter after three months,” Queenie said.

“I found out that they were reunited later in life, and I realised that’s how I can write the story, that can be the bookend – she lost her daughter in the beginning but then she found her again, and she said to her daughter [about Blue], ‘The songwriting was something I did while waiting for you to come back.'”

Queenie describes her show as a love letter from one mother to another, interweaving the music and the melancholy that rings through Blue.

The show is set in an artist’s studio with paint brushes, beautiful rugs, hundreds of LED candles and incense burning. There is a large painting of Joni.

“It immerses you in this beautiful melancholy for an hour, and it makes you understand the songs, and the way we tell stories around them; it reveals parts of Joni’s life that really make her songs so much richer,” Queenie explained.

For Queenie, it’s an honour to tell this side of Joni’s story, one that many people would understand.

“Joni is so open and generous with her story and her emotions. She makes you feel that you’re ok when you’re feeling down or sad,” Queenie said.

“I think everybody needs that sense of connection right now. I want audiences to walk away feeling like they’ve had a big warm hug.”

Blue: The Songs of Joni Mitchell will be at Hayes Theatre from July 19-24. For tickets, visit boxoffice.hayestheatre.com.au