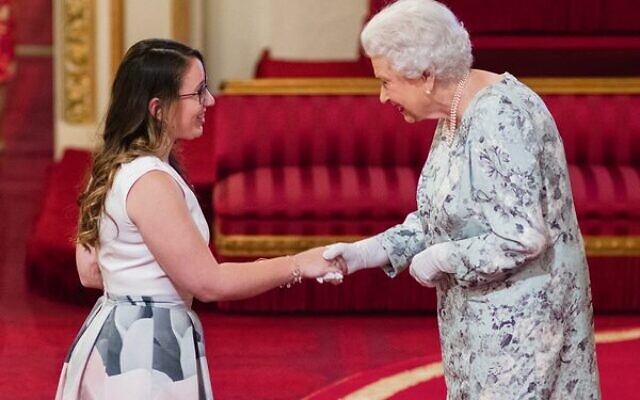 Madeleine Buchner receives her Queen's Young Leaders award in 2017 from Her Majesty the Queen at Buckingham Palace.

At only 24 years old, Jewish change-maker and founder of Little Dreamers Australia, Madeleine Buchner had the honour of meeting the Queen.

Buchner founded Little Dreamers in 2016 and was presented with a Queen’s Young Leaders Award for the work she does supporting young carers to feel “seen and heard”.

In 2017 the Queen’s Young Leaders program concluded with a presentation by Her Majesty Queen Elizabeth II at Buckingham palace.

Buchner recalled to The AJN that attendees had to partake in an hour-and-a-half long etiquette class before meeting the Queen. Buchner was taught that the Queen must address you first and only she can initiate a handshake. You must greet her with “Your Majesty” the first time you say anything, after that you call her ma’am.

Buchner explained, “Just being in the room with her was very overwhelming, and I remember turning to my friend … and he told me not to start crying, because that would ruin my make-up.”

Buchner had the opportunity to speak to the Queen during the ceremony, about her mother and brother for whom she grew up caring, as well as her mission with Little Dreamers.

The Queen gave her what felt like a “royal decree”, in saying “it’s an incredible honour to take personal experience to change lives, and that I should keep going”, Buchner shared.

Buchner added, “I wish I could go back to that moment and take a really deep breath and recognise how much my life was about to change.”

Communal stalwart Mark Leibler and his wife Rosanna also met Her Majesty in 2006 at a dinner hosted by then prime minister John Howard at Parliament House in Canberra.

“We did have a chance to just briefly be introduced and exchange pleasantries,” he said, adding that she was “very, very charming”.

“Everyone was really absolutely delighted and thrilled to be there. And it really didn’t matter whether it was Liberal, Labor or National politicians. She’s a very apolitical figure.”

Leibler said he will remember the Queen as “warm, sincere and a great uniter of peoples”.

He also gave credit to Prime Minister Anthony Albanese and many others who hold pro-republican views for the respect shown in the wake of her passing.

“You couldn’t have been more respectful,” he said.

“Even to the point of pointing out that whatever your views are as to whether Australia should be a monarchy or a republic, this is not the time to talk about it. It’s a time of mourning.”

Executive Council of Australian Jewry co-CEO Peter Wertheim had the pleasure of meeting and shaking hands with the Queen at a reception given by her and Prince Philip at Buckingham Palace in 1999.

“The Queen was dignified but friendly and shook hands with many of the guests,” he said, adding, “When it was my turn, I told her I was from Australia, and she smiled and said, ‘You are going through some interesting times,’” referring to the referendum on the republic which was to take place 10 days later.

“Even though I have long supported Australia becoming a republic, I have to admit to being a little bedazzled by the encounter and the grandeur of the setting. No nation does pomp and ceremony in quite as imposing a way as the British,” he said. 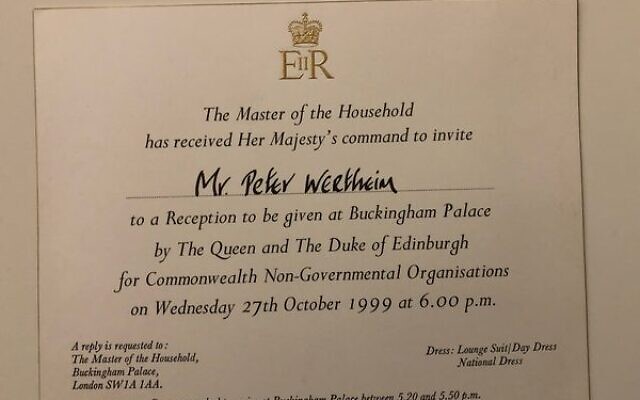 Australia/Israel & Jewish Affairs Council director of international and community affairs Jeremy Jones was one of two representatives of young Australians invited to meet the Queen at an exclusive reception hosted by then NSW premier Neville Wran at Sydney’s Wentworth Hotel in 1980.

Jones was at the time a student at Sydney University and a member of the university’s academic board, faculty of arts, students’ ­representative council and union board.

“When the Queen walked in, the room went silent, and we all listened intently to her brief speech,” he told The AJN, adding, “She then met and shook hands with, or acknowledged other gestures of respect from, every person present.”

“There were quite a few republicans and political progressives in the room, but all seemed impressed by her air of calmness and the way she made each of us feel that saying hello to us was important to her,” he said.

Rabbi of St Kilda Shule and co-vice president of the Rabbinical Council of Victoria, Rabbi Yaakov Glasman also met the Queen on her last visit to Australia in 2011.

He said he was “absolutely gobsmacked” when he received the invitation and RSVP’d immediately.

“What struck me when walking up Government House Drive was the sight of thousands of people who’d lined St Kilda Road and waited for hours just to get a glimpse of the Queen through her car window as it drove past,” he said.

“‘How incredibly lucky am I?’ I thought as I walked straight past the crowds and into the venue brandishing the invitation that only a select few were lucky enough to receive.”

He described the Queen as “gracious, dignified and radiant”.

“Queen Elizabeth walked past me and offered me the royal nod. I didn’t get the opportunity to talk to Her Majesty but the memory of ours eyes locking, albeit for that fleeting moment, will remain with me forever.”