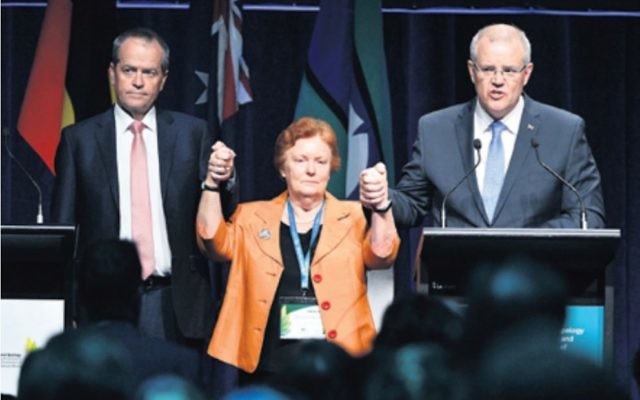 In a rare moment of unity Prime Minister Scott Morrison, Opposition Leader Bill Shorten and Cheryl Edwards, who led the advisory group for the apology, came together to apologise to survivors of institutional child sexual abuse. Photo: AAP Image

WITH one sentence, emotion filled Parliament House in Canberra on Monday.

“Today the Australian government and this Parliament, on behalf of all Australians, unreservedly apologises to the victims and survivors of institutional child sexual abuse,” Prime Minister Scott Morrison said.

“Today we reckon with our past and commit to protect children now and into the future.

“Today we apologise for the pain, the suffering, and trauma inflicted upon victims and survivors as children, and for its profound and ongoing impact.”

His comments were echoed by Opposition Leader Bill Shorten.

“Today is because of you,” he said addressing the survivors.

“Today is because of your advocates, your networks, your organisations and your leadership.

“It is you who have bravely fought the long battle for justice, for recognition, for truth to be believed.

“It is you who brought this day into being.

“It is you who kept coming forward, again and again.”

The apology comes on the back of the Royal Commission into Institutional Responses to Child Sexual Abuse.

The Royal Commission received nearly 40,000 calls, heard from more than 7000 survivors, reviewed more than 1.2 million documents, had 444 days of public hearings and referred more than 2000 matters to authorities.

Dassi Erlich, who was allegedly sexually abused by Malka Leifer at the Adass Israel School in Melbourne, said she didn’t have any expectations but was overcome with emotion during the apology.

“The atmosphere of having 800 or 1000 survivors in the room, with all the anger, the grief, the memories and the pain together, solidified what the day meant to so many people,” Erlich told The AJN.

Erlich said the most emotional moment for her, was when they spoke about those who hadn’t survived.

One of the most inspiring moments of the day or Erlich was meeting with a group of ex-religious people from different faiths.

“Everyone was at different stages of their journey, and we heard about how they each arrived at the point of coming to Canberra,” she said.

The Executive Council of Australian Jewry (ECAJ) welcomed the apology, noting there can be no higher priority than protecting the safety and wellbeing of children.

“In particular we acknowledge and join in the apology for the abuses that have occurred in Jewish institutions, the failure to heed the warning signs, the refusal to listen to complaints from children and their families, the failure to protect the children and the reprisal actions taken against those who exposed the wrongdoing,” ECAJ president Anton Block said.

“It is a core part of our Jewish values that the life of the individual cannot be sacrificed to the interests or convenience of any institution, and it is a shocking truth that certain institutions that pride themselves on their Jewish ethos at times failed to operate by those values.”

Block said he also encourages communal organisations to join the National Redress Scheme, and to that end he noted that the ECAJ worked with the Department of Social Services to create an official document explaining the importance of joining the scheme.

The ECAJ sent that document to more than 180 Jewish institutions across Australia urging them to join the National Redress Scheme last week.