WHILE streaming Rosh Hashanah services early Saturday morning, I learned of Ruth Bader Ginsburg’s passing. I broke down and cried. Even though I had never met her, the sense of loss was profound, and the fear was real. One of the most accomplished, groundbreaking Jewish women leaders of our time was gone. As the new CEO of NCJWA Vic, an organisation whose mission is to empower women and girls to create a better world, her death hit close to home. I told our twin daughters the closest living woman to Wonder Woman had died.

Raised in Northern New Jersey, I spent a significant part of my childhood at my Grandma Tillie’s in Brooklyn; not too far from where RBG grew up. After graduating high school, I, like many of my American peers, went away to college 500 miles from home. I was determined to become an educated, self-sufficient, and independent woman. It was during this time, after facing antisemitism on campus, that I first became involved with organised Jewish community. And it was also during this time that RBG became the second woman and the first Jewish person to sit on the highest court in the land.
I was in awe and inspired. If she could be a Supreme Court Justice, what could I become?

Throughout my college career and beyond, I aspired to be a leader like RBG; one who builds consensus and builds others up instead of tearing their opponent down. The genius behind her accomplishments was her demeanour and approach. She did not carry a big stick. She carried herself with class and dignity. 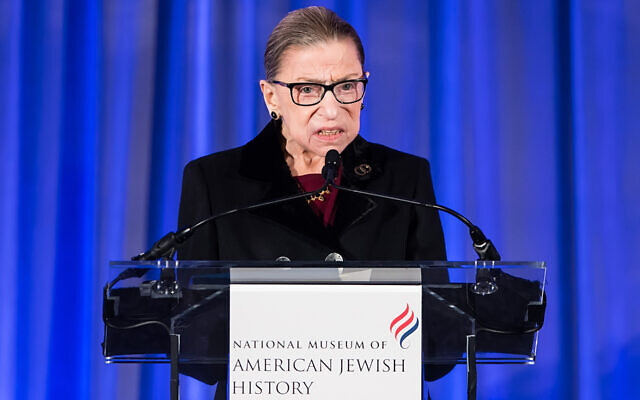 Ruth Bader Ginsburg during her induction into the National Museum of American Jewish History’s Only In America Gallery in December 2019. Photo: Gilbert Carrasquillo/Getty Images

As a Jewish working mother, I am inspired by RBG’s ability to graduate number one in her ivy league law school class – even after becoming a wife and mother, way ahead of her time. I am in awe of what she achieved, especially given how society treated women during that period. One could say her achievements and success were likely to be considered impossible. When Hillary Clinton ran for president, she often spoke of cracking the highest glass ceiling in the land. Well, let me tell you, it was RBG who broke the door down. She paved the way for women like me and you to find our voice, develop it and use it for the greater good.

RBG is a cultural icon and the beacon of hope for many. Regardless of political affiliation, she was a woman to watch and a force to be reckoned with. Even while battling cancer and undergoing chemotherapy and radiation treatments, she never missed a day on the bench. She had strength, determination and grit. I equate RBG to a featherweight fighter; she may not look strong or tough but don’t count her out, she carries quite a punch. She did not just fight for those who agreed with her, or for people who were like her or just for Jewish women – she fought for all of us – all women and even for men. RBG fought for people who despised her and those who even thought she was un-American. She persevered, dissented, and she never stopped working to ensure we were all treated equally, fairly and without prejudice.

This is the world I want for my girls and yours.

WHERE does one start to try to explain the impact that the minute in stature but enormous in achievement Ruth Bader Ginsburg has had in so many areas. She changed attitudes to gender equality and fought many battles to achieve the goals of righteousness. 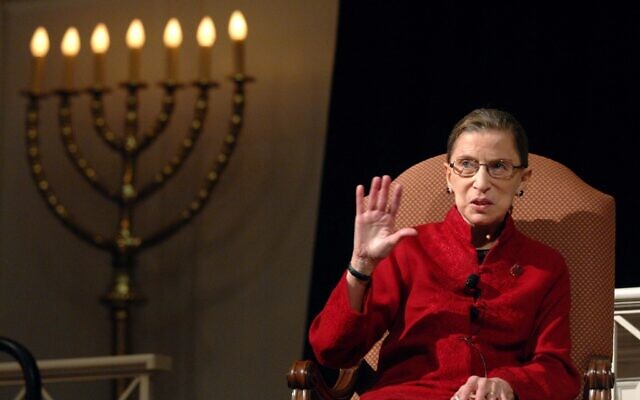 My first introduction to RBG was when I saw On the Basis of Sex at the Jewish International Film Festival in 2019. I had heard that this was a ‘must see’ movie so I went with my husband not really knowing if he would like it. We were both totally enthralled by her story and achievements against so many odds. She changed thinking and laws in the US regarding gender equality for both men and women in so many areas of law and social welfare, including the abolition of eugenics which was rife at the time. Her fight for what she deemed right for free citizens in a free country, no matter their gender was paramount, as was her belief in her Jewishness – which she never tried to hide. Her aims were fraught with so many challenges but she had a direction and a path that she needed to follow to right so many wrongs and with doggedness and great intelligence she achieved this.

I believe that we all can learn a lesson from RBG. As women communal leaders we can always learn and inspire younger women with the view that nothing is impossible if you believe enough, and are prepared to put in the effort. She was a beacon of light in a male dominated, legally deficient society where she made changes that to this day carry a great deal of legitimacy. She certainly was an Eshet Chayil to be highly admired and where possible emulated.

I HAVE been a keen observer of the US Supreme Court since I was an Associate to Justice Mason on our High Court in 1979. Differing from our High Court, the activism and internal political divide of the Supreme Court is an accepted part of the fabric of US society.

RBG was the quintessential Democrat and liberal on the Court – a social justice icon and a supporter of women and gender equality well before it became fashionable. She maintained constructive relationships with the conservatives enabling the court to produce important guiding judgements.

I admired her obvious grit and determination – working through multiple bouts of cancer and her methodical, logical and relentless approach to fighting inequality – as the first tenured professor at Columbia Law School, as an advocate winning cases on discrimination and on the Supreme Court as an important influencer.

Above all else, what resonates with me is how she exemplified the power of the law to shape and influence society. In the current environment of political and social divide we sometimes forget that the fabric of society not only reflects but is shaped by the law and we need fine intellects like RBG to help guide society to sensible outcomes. She believed in balanced and considered reform that united people and demonstrated this on the Court by society changing judgements that ranged from removing discrimination against women attending military colleges, permitting affirmative action in university admissions and legalising same-sex marriage to name just a few.

As a role model for all women, she showed that stature is not physical but intellectual; that issues can be won by persuasive argument and not force, and that guiding philosophies like equality can prevail. As a Jewish woman, her cultural inheritance was never forgotten and we should all be inspired by her fundamental philosophy: “Tzedek, tzedek, tirdof (Justice, justice shall you pursue)” which directed her work and has left an amazing legacy.

I REMEMBER watching the movie On the Basis of Sex, about the life and legal career of the Notorious RBG.

At the time I recall being thankful that, even though I am Australian and live on the other side of the world, this woman’s life work was able to have an impact on the lives of so many.

Now, in the time of mourning her death and celebrating her life, I am asked to write about that impact. My first reaction was, “How could I possibly do justice to this champion of justice?” 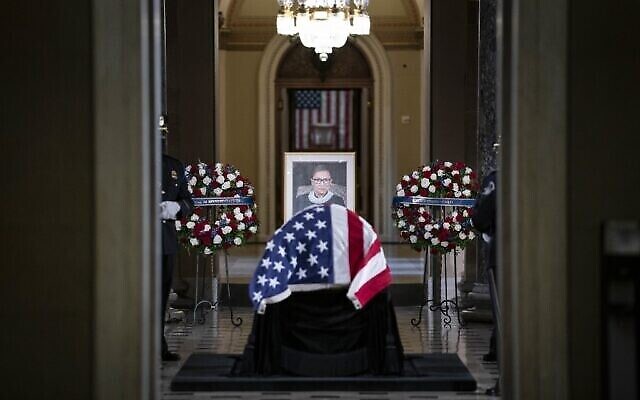 And yet, on reflection, it is the lessons that her life teaches us that have such universal resonance.

Ruth Bader Ginsburg showed us that you do not have to accept the artificial boundaries that limit women from succeeding in a field dominated by men.

She showed us that tenacity and hard work and determination are essential ingredients in a truly successful career. Her marriage to Martin Ginsburg showed the strength of a balanced and symbiotic relationship allowing both partners’ lights to shine.

In her commitment to women’s rights she showed us that although the battle may be long and difficult, equality is worth fighting for.

With her potent combination of intellect, reason, logic and compassion she cut through opposition to marriage equality and placed it right there along the civil rights continuum. As if to reinforce her point, she became the first judge on the country’s highest court to perform a same-sex marriage.

She embodied the very best example of intellect intersecting with humanity, and power wielded for good.

Her life, enhancing the quality of life of so many others, was the finest example of Jewish values.

Let us pause for a moment to thank the Notorious RBG for her service to the pursuit of justice, equality, mercy, humanity and the concept of tikkun olam, or repairing the world.