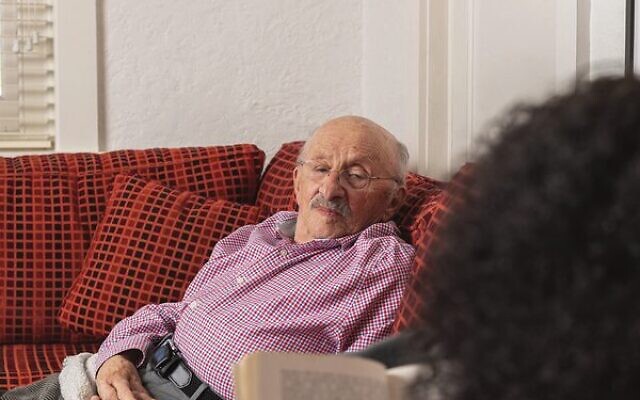 Frances reading to her dad, David.

It’s bizarre to think that Frances Prince has COVID-19 to “thank” for her new book, The Gift of Time.

Just prior to the pandemic breaking out, Prince stumbled upon a book by Jeremy Varon, The New Life: Jewish Students in Postwar Germany.

Finally, there was a book that detailed the experience of young Jewish survivors who went on to study in Germany’s universities after the Holocaust.

Two of those students were Prince’s parents – Ella and David.

Prince was thrilled, describing it as “the book I had long been waiting for”. She was just as thrilled to share the discovery, and the book, with her dad.

But then the pandemic reached Australia and various restrictions were handed down around the country, including lockdowns.

Suddenly, Prince knew how she would care for her dad during what could potentially become a very lonely and isolating period for him.

Together, they would read Varon’s book.

That was it. That was the plan.

She had no plans to write about the endeavour. Yet, she said, the words would pour out of her the moment her dad went home for the day.

The Gift of Time is the result of their reading project.

Prince describes the multi-layered book – part memoir and oral history, part biography, part Shoah history – as very personal. “If you read it, you know me,” she laughed. “My head and my heart are there.”

While she knew a lot about her parents’ lives at university after the Holocaust, their stories were told in piecemeal fashion. Nothing was linear.

They had just survived the most atrocious circumstances, losing their families. They hadn’t graduated school. Yet they found themselves accepted into the Ludwig Maximilian University of Munich.

Throughout her reading adventure with her dad, which is still ongoing, Prince said she was privy to a playfulness from her dad. There were moments, in fact, that they both found themselves cackling away at a memory that came up – those from David’s childhood and the cheekiness he exhibited. 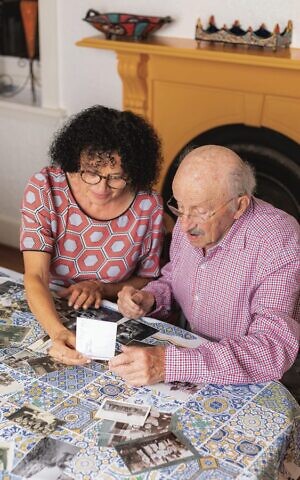 Frances and David pored over photographs from her parents’ youth.

David Prince has shared his story with the Jewish Holocaust Centre in Melbourne. But his history has never been shared like this.

One memory left Prince screeching with laughter as David told her that despite not being musical, he tried out for the school orchestra just so he could parade around with his instrument, telling her, “I was a show-off, with an alto trombone, that I couldn’t play.”

Over Zoom with The AJN, Prince reads from her book: “A recent mantra of mine is that we should all meet old people when they were young.”

She continues, saying that especially, “You have to meet your parents when they were young.”

David, who would close his eyes as Frances read the stories, travelling through Lodz walking street by street, gave his daughter insight she never otherwise would have gained.

Prince says she has Varon to thank for this, writing: “He managed to peel back over 70 years of Dad’s life and thus enabled him to reveal and relive who he was as a man in his early twenties.

“I was privileged to witness this astonishing daily transformation.”

Now, we all can witness it too.

The Gift of Time is available in select bookshops or online at francesprince.com and will be launched virtually on Thursday, October 14 at 8pm, in conversation with Joanna Murray–Smith. To register: francesprince.com/events/book-launch