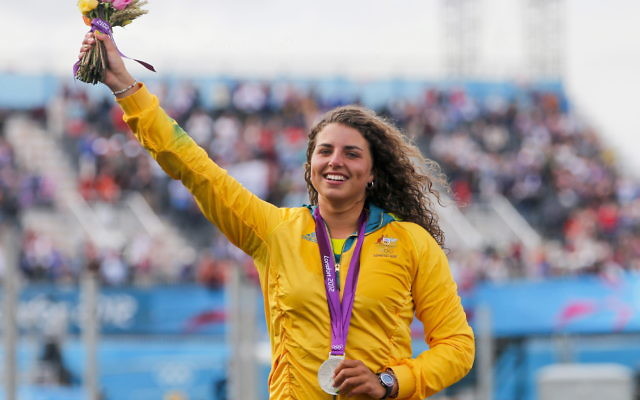 FOR the first time in eight years, an Australian Jewish athlete has won a medal at the Olympic Games, after it was revealed that silver medal-winning kayaker Jessica Fox is Jewish.

The daughter of former French Olympic kayaker Myriam Fox-Jerusalmi finished just over half-a-point away from Australia’s first-ever Jewish gold medal, completing the women’s kayaking (K1) with a score of 106.51.

Fox launched to fame with a gold medal in the same event at the 2010 Youth Olympics in Singapore, and followed it up with a stunning display in London, joining her mother, who won gold for france in Atlanta, as a Jewish Olympic medallist.

“Both my parents competing in the Olympic Games is something pretty special,” Fox said. “It definitely inspired me to get to this position. Winning a medal is something that you dream [of] and I’m proud to follow in my mother’s footsteps.”

On the track field, Steven Solomon became the first Australian to make the 400m final since Darren Clarke did so at the 1988 Seoul Olympics.

Solomon ran his three quickest times at the Games, including a personal-best 44.97 in the semifinal.

“I ran my heart out and did the best I could … [and] I am really ­hungry for future success.”

The 19-year-old justified Athletics Australia’s decision to give him the individual spot ahead of John Steffensen, but the country’s top two 400m runners will need to work together for the 4x400m relay on Thursday night (Eastern Standard Time).

New Zealand sailor Nathan Cohen became the second Jewish athlete to win a gold medal in London, while fellow Kiwi Jo Aleh is currently in first position after the eighth of 10 races in the women’s 470 race.

From the Israeli team, sailor Lee Korzits just missed out on a medal in the women’s RS:X, and Shahar Zubari, who won bronze in Beijing, also failed to place in the top three in the men’s RS:X.

Nufar Edelman was off the boil in the women’s laser radials, while Gil Cohen and Vared Buskila sit in 12th place after eight races of the women’s 470. Gideon Kliger and Eran Sela ­finished in 15th spot after the men’s 470 qualifying races.

Judoka Ariel Ze’evi lasted only 43 seconds on the mat against German Dimitri Peters in the 100kg event.

Yakov Toumarkin finished in seventh place in the final of the 200m backstroke, while synchronised swimming pair Inna Yoffe and Anastasia Gloushkov just missed out on a spot in the women’s duet final.

Gymnast Alexander Shatilov finished sixth in the men’s floor exercise, while Neta Rivkin and the rhythmic team are yet to begin their Olympic campaigns.

Donald Sanford ran a national-record 45.71 in the first round of the men’s 400m but failed to progress, while pole vaulter Jillian Schwartz also fell short of a final berth, only managing 4.40m as her highest jump.

Zohar Zemiro is set to compete in the marathon on Sunday night (Eastern Standard Time).